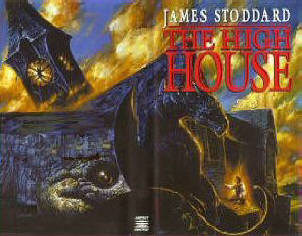 In 1998, American writer James Stoddard published his debut novel, The High House, and two years later followed it with a sequel, The False House. They’re two of the more remarkable fantasies I know.

The High House is Evenmere, a fantastic old rambling edifice that was the boyhood home of Anderson Carter. His father was Master of Evenmere, but the machinations of Anderson’s step-mother, Lady Murmer, led to him being sent away from the High House. Years later, he returns — just as evil forces are emerging to threaten the house, and by extension, all of creation.

For Evenmere, we learn, is not simply a house among houses. In a way, it is the world, and a stranger world than we know. Its doors open onto an endless series of hallways, home to whole nations. The clocks and lamps of Evenmere are the clocks and lamps that keep the universe in motion; for them to run down, or go out, is the ruination of all things, and it is the responsibility of the Master to ensure this does not happen. But the elder Anderson has disappeared, and the sinister Society of Anarchists is stirring …

Stoddard’s books are marvelously well-told fables of the High House, and the schemes of the Anarchists to destroy it. They’re imaginative, droll, and exciting. And they draw their inspirations from very fine sources.

From 1969 to 1974, editor Lin Carter oversaw an imprint for Ballantine Books called the Ballantine Adult Fantasy series. Known by the distinctive emblem of a unicorn’s head, the series reprinted in paperback and made broadly available works by significant early fantasy writers, mostly British, including William Morris, Lord Dunsany, James Branch Cabell, E.R. Eddison, G.K. Chesterton, and many others. The books still often turn up on used bookstore shelves, introducing (one assumes) new generations to their tales.

A note in Stoddard’s first book proclaims his indebtedness to the series, which is anyway easily visible throughout. You see it in references such as character names (one character is named Chant for Joy Chant, another is William Hope for William Hope Hodgson — you can see a list of annotations for the first book here); but you feel it more strongly in the style of the book.

Both the prose and the quality of invention of Stoddard’s novels evoke the sense of pre-Tolkien fantasy perfectly. There’s an arch Edwardian or Victorian sense to the diction, which fits nicely with the characters and the way they think and act — and while we’re never given a precise date for the “real world” beyond Evenmere, in the second book the characters discuss the changes being wrought by the telegraph.

The type of magic of the house, the kind of fantasy we get, has the feel of what we might find in Charles Williams or perhaps C.S. Lewis. Magic that’s not necessarily entirely in the control of anything human, magic that hints at a magical universe — an enchanted world. But also a world with a sense of structure or pattern behind it that humans can occasionally glimpse. A hierarchical world, perhaps, but one that overall rewards the bold and just.

Similarly, the prose deftly evokes the feel of the older fantasies. The rhythm of the sentences are clever and correct, rising to evoke by turns awe, melancholy, and whimsy. Dialogue is formal, but sharp, particularly when Carter follows a secret passage in his room up to an old attic where he encounters Jormungand, the Last Dinosaur; Jormungand’s got some of the best lines in the book, a cunning blend of threat, insinuation, anachronism, oracular pronouncement, and bluster.

In sum, these two volumes read like the Gormenghast books rewritten by G.K. Chesterton. The empty rituals of Mervyn Peake’s castle have meaning, have heart, in the homier setting of Stoddard’s High House. Class-bound hierarchies are replaced by fellow-feeling. There’s a streak of conservatism (not political so much as tonal, a kind of nostalgia for the values of the past) in the books, as there are in some of its inspirations; that works, up to a point, as a literary exercise. 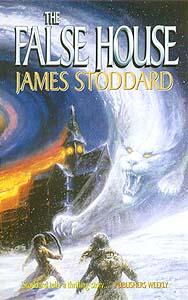 The second book does push that point a bit further, though, as the Society of Anarchists return to try to replace the High House with a House, a world, of their own making. The book explores them a bit more, and the result is, I feel, mixed. Despite their name, there’s nothing particularly anarchical about these anarchists. Instead, they’re focussed on the problem of evil — why does a just and all-powerful God create a world filled with pain?

Unable to come up with a reasonable answer to this question, the anarchists have decided to destroy the world, and remake it better. The problem is that the books never really present a satisfactory counter to their point of view; one just has to take it on faith that the status quo is superior to what the anarchists will deliver.

And it does seem that the anarchists don’t understand the forces that they deal with, and can’t really make the better world that they think they can. Still, usually a Chesterton or Lewis would at least take a stab at trying to answer the objections of their villains. Here, you uneasily wonder if they haven’t got a point.

It’s true that other writers, such as Dunsany and Cabell, were much more cynical about finding order in the universe; but the structure of the stories otherwise seems in harmony with the Chestertonian, theist approach.

Let’s say, then, that the weaknesses of the books tends to follow from weaknesses in the books that inspired Stoddard. The metaphysics are a bit pat; the characters not very deep.

But then those weaknesses are themselves signs of how well Stoddard’s captured the spirit of the older fantasies. Chesterton especially knew that the point of a character in a tale, what used to be called a romance, was to get the story told as well as possible. Interiority was not the point; the point was the fable.

In that spirit, what matters is the dexterity of the tale-teller, and here Stoddard proves himself worthy of his predecessors. The invention is unflagging and, especially in the second book, the various strands of the narrative dovetail together nicely to create memorable endings.

I think Stoddard’s books deserve to be better-known than they are. Unfortunately, it seems he hasn’t published a novel since The False House. His web site notes that he’s written a third book in the Evenmere saga, but has not yet found a publisher for it. The good news is that he continues to write short fiction as well — including, I’ve been informed, some work upcoming in Black Gate.

Black Gate » Blog Archive » Self-Publishing: What I’m Doing, and Why

[…] owing a bit to predecessors like Peake’s Gormenghast and (perhaps especially) James Stoddard’s The High House, but with, I thought, a distinct feel of its […]