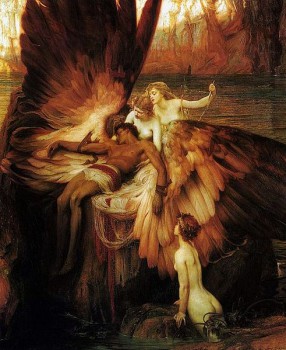 . . . And the boy thought,
This is wonderful! and left his father,
Soared higher, higher, drawn to the vast heaven,
Nearer the sun, and the wax that held the wings
Melted in that fierce heat, and the bare arms
Beat up and down in air, and lacking oarage
Took hold of nothing. Father! he cried, and Father!
Until the blue sea hushed him, the dark water
Men call Icarian now. And Daedalus,
Father no more, called “Icarus, where are you!
Where are you, Icarus? Tell me where to find you!”
And saw the wings on the waves, and cursed his talents,
Buried the body in a tomb, and the land
Was named for Icarus.

Where does the love of fantasy, and of storytelling, start? For every person it’s different, of course. For me it begins with feathers on the waves.

Those feathers, the remains of Icarus’s joyful but tragic flight toward the sun when he forgot his father’s warnings, are specific for me. But the broad world of the tales of the Greeks and Romans are a gateway for many people into fantasy. Whether it started with the Minotaur, the war at Troy, the labors of Heracles, Bellerophon on Pegasus against the Chimaera, or Perseus and Medusa, the Greek’s ancient religion and the poets whose writing let it survive have introduced countless readers to the fantastic and the greatness it can achieve.

I’ve often thought about the source of the power of the Greco-Roman legends, their heroes and the gods, and why they still have such enormous affect on us today, when no one worships them any more. They were even losing their grip on religious importance in the time of Ovid, one of the greatest tellers of their exploits. In the twenty-first century, the Iliad is no less an engrossing a story, the plays of Sophocles can still ensnare an audience, and even Hesiod can infuse a sense of wonder in a modern reader as he writes about the beginnings of all things.

The word “mythology” is often used to describe these stories, and although a useful academic term, I tend to feel personally ambivalent about it. “Mythology” means ancient religious stories that are no longer held to be true, not necessarily something that is simply “false.” But “false” is still the meaning most people connect to the word “myth.” We should never lose sight of the truth these “myths” had to those who first wrote them down. The Greek stories of gods and heroes were the religion of an entire people who ardently believed in them, studied them, and followed them for wisdom and guidance. And these are the same people who founded Western culture. The Greek religion and its Roman descendant, which eventually became too calcified in the state and therefore started to lose its human appeal, is the Western cultural heritage.

There are many other arguments for the permanence of the Greek religion as modern entertainment: the humanity (and all the good and bad that implies) of the gods, the depth of emotional tragedy in the epics, the skill of the poets who brought the legends to us, and a slew of amazing monsters. But I think I can narrow it down to a simple idea, one that crystalizes when I think of my first encounter with the tale of Daedalus and Icarus. The Greek legends are, at the core, great storytelling.

I’ve often said that seeing Clash of the Titans (this one, not that one) when I was eight years old was what made me fascinated with the ancient Greeks. It was the point where I actively started to read books on the subject and began a love that has gotten stronger over the years and shaped most of my interests since. But the Ray Harryhausen movie wasn’t the first memory I had of a story from the ancient Hellenes. That comes from a moment three years earlier, when I was too young to understand there was a topic to pursue, but which left a lasting impression on me. 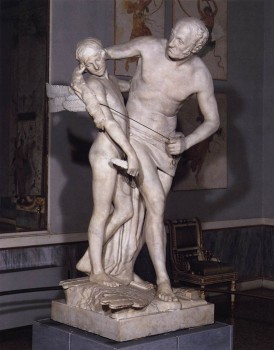 I was attending a summer camp, the sort for very young children which only lasts a few hours during the day under close supervision. The most exciting part of the camp was the “sleepover” night, where our fathers would stay with us for a cookout and then we got to lie in sleeping bags on a field under the southern California night sky. The counselors had arranged a stargazing activity, pointing out the shapes of the constellations—not easy to do outside of the lights of Los Angeles, by the way. To help us understand this idea of men who had grouped the stars into shapes that we kids found pretty obtuse (A man beating up a lion? Where? I don’t see that.) they gave a slide show in one of the buildings. It told the story of Daedalus and Icarus along with synchronized narration. Ah, the 1970s and the days before easy access to a video player.

The tragedy of Icarus warped my young mind. It stunned me. I think it was the first truly “great” story I had ever heard. Previously I had kindergarten books with cute rhymes and fun pictures, brief moral lessons dressed in fairy tales, and those bland idiots Dick and Jane. Some of those children’s books (not Dick and Jane) are still favorites of mine, but they are tidy and pleasant and charming. Icarus and Daedalus is nothing of the sort. It saddened me and terrified me, but also gave me a shuddery thrill. At the time, I couldn’t understand why I felt this way. It was a horrible tale, really: a father arranges for him and his son to escape from captivity using wings along their arms, and even though the father warns his son not to fly too high, the boy does anyway, and loses his feathers and falls in the ocean to drown.

What a mean, mean story. Why would anyone want to tell this? A father shouldn’t see his son die. That wasn’t supposed to happen. People weren’t supposed to die in stories. And who were these people? When did they live, and where did this story first come from? It seemed to be telling me a lesson (obey your parents, kids) but it didn’t feel as if a teacher were standing before me and giving a boring lecture about obedience and why you should cross with the traffic guard and not talk to strangers. No, this was something weird and bizarre and scary . . . and great. The slide showing feathers floating in the water, and Daedalus flapping above them, knowing his son was dead, made me want to cry . . . but it was so wonderful that it could make me want to cry.

For weeks I could not get the story out of my mind. I remember nothing else from that sleepover. Only Icarus, and the feathers on the oceans, of which Ovid said pennas adspexit in undis (“he spotted plumes on the waves”).

Sometimes I forget about this first Greco-Roman experience, and mostly recall the eight-year-old reading D’Ulaires Book of Greek Myths. But then, in certain quiet moments when I’m digging back through childhood (watching my young nephew grow up causes this to happen more and more) I can again see that slide show and recall how it affected me. It wasn’t just about Greek “myth.” It was about finding the greatness of “story.” It was a kind of tale that was deeper and stranger than anything I had heard before. It was the first adult story I encountered. It clearly wasn’t real—I knew you couldn’t fly by strapping on wings, I had tried it!—but it had a truth to it that I couldn’t shake.

Edith Hamilton, in her famous compendium Mythology, has little positive to say about Ovid’s rendition of this story (she prefers the “vanilla text” version from the Library of Apollodorus), but I’ll stand up for the great Roman poet: his version is stunning, even in translation, and reading it is the closest I’ve come to feeling again what that five-year-old boy felt.

And Icarus, his son, stood by and watched him,
Not knowing he was dealing with his downfall,
Stood by and watched, and raised his shiny face
To let a feather, light as down, fall on it,
Or stuck his thumb into the yellow wax,
Fooling around, the way a boy will, always,
Whenever a father tries to get some work done.

For you readers out there who grew into fantasy through the Greeks, what is the first story that you remember?

Its been so long i can hardly remember. I don’t know what the first Greek myth was that i read but Greek myths were what first got me into fantasy. The ones that stand out were the Hercules stories for sure. I had read most of edith hamilton’s Greek Mythology in the 6th grade.

also i can remember thinking to myself at that age “those dang romans just stole everything from the greeks and renamed it, i’m not toing to read Roman mythology.”

absolutely great, I hope Sue excuse me, but, maybe, this is the best article I have read in Black gate, plenty of nostalgia and passion for a topic
I read this myths too at eight or nine, I remember two old books and a dictionary on the subject, my favourite being the version of the war of Troy in one of the books, lots of action and epic,emotions and tragedy… Achilles, Ajax, Diomedes,the gallery of allies of Troy being killed by Achilles or other greek heroes like Pentesilea or Mennon, the fate of Laocoonte and his sons, the mean vengeance of Odisseus against Palamedes, the destruction of Troy… as Jorge Luis Borges said all the stories are in the Iliad and the Odissey…
I found some of the myths mean and cruel, the fate of poor Arachne, the sad story of Niobe and his sons… and the killing of the aspirants husbands, I don’t know the word in english for pretendientes, of Penelope and the maidens by Odisseus…
by the way what book of mythology can you suggest me? what about the ones by
Robert Graves?

Francisco, the word you’re looking for in English for “pretendientes” is “suitors.” That’s the usual translation into English from the Greek word (Μνηστῆρες) for the slobs hanging around waiting for Penelope to marry them.

I like Robert Graves’s book because I grew up with it in high school, but his interpretation of the myths is not supported by other mythographers and is really his personal exploration. An excellent edition as an alternative is Pierre Grimal’s Penguin Dictionary of Classical Mythology.

but are you referring to the concise dictionary of greek mythology of Grimal or the long version?