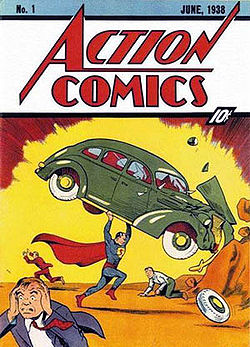 ABC News is reporting that an American couple in the South, who have asked to remain anonymous, discovered a copy of Action #1 while clearing out their home in preparation for a foreclosure sale.

It’s not clear if the couple immediately knew what that had.  They did have the presence of mind to contact an expert, Stephen Fishler, who brokered the record-breaking $1.5 million sale of a copy in March of this year.

Action #1, featuring the first appearance of Superman, is perhaps the most valuable comic in existence, and certainly one of the rarest. It appeared in June 1938, and while millions of copies were printed, only a handful are known to still exist in good condition.

The comic was part of a stash of old magazines and old comics the couple found as they were searching for boxes in the basement and preparing to move. Although Fishler reports he was initially dubious, he quickly became convinced when the couple texted him a photo.  He took the comic to the San Diego Comic-con in July for a valuation.

The comic was appraised at “Very Good” (5/10 on the strict comic grading scale), which is exceptionally high for a 72 year-old comic.  It is expected to net $250,000 or more when it goes up for auction through ComicConnect on August 27th.

As for the couple, ABC News reports that Fishler had to make a series of calls to the bank to convince them to hold off on the foreclosure while the auction goes forward.

Reports that a house down the street that discovered two dozen copies of Youngblood #1 in the basement was immediately bulldozed, have not yet been confirmed.