The first thing you notice about Barry Windsor-Smith’s Conan comics is their beauty.

Starting in 1970, Smith drew almost two dozen of the first issues of Marvel Comics’ translation of Conan into a monthly color comic book, and added a few more stories in the oversized black-and-white companion magazine Savage Tales. Scripts for those stories, often direct adaptations of Robert E. Howard tales, were by Marvel veteran Roy Thomas, but Smith has stated that he had a prominent role in the plotting of the comics, sometimes even providing dialogue. 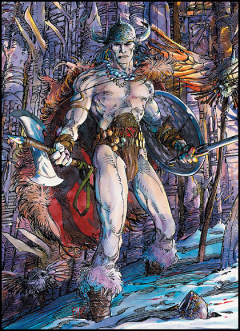 Smith’s work has an elegance and power to it unusual in comics, then or now. His line-work is detailed, expressive, and precise: the right marks in the right places. Compositionally, his work is always clear, always energetic.

And it’s alive, because his characters are alive; they move through three-dimensional space, they have realistic body language — more than that, their forms express what they feel and think.

Perhaps above all, Windsor-Smith’s design — of clothes, swords, balustrades, towers, armour, even ships and stone walls — is constantly inventive, deriving from the organic forms of art nouveau and the near-hallucinatory realism of the Pre-Raphaelite Brotherhood.

This has the crucial effect of building a world for Conan and his adventures, a setting with texture and, implictly, a history. We see the shining kingdoms and the jeweled thrones about to be trodden under sandalled feet, and we believe in them. 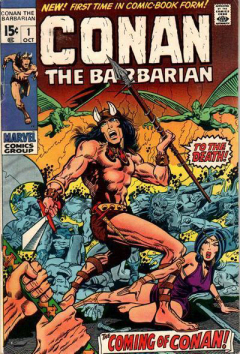 Windsor-Smith didn’t begin his work on Conan as a comics master. He was a very young man, with a relatively small body of work behind him. In fact, he was originally assigned to Conan because, as a journeyman artist, he’d command a lesser salary than veteran Marvel artist John Buscema, originally scheduled for the job.

At the time, Marvel had never done a sword-and-sorcery book like Conan, and even though they’d acquired the rights to do the book for a relatively small sum, they had no idea how the book would sell; any savings they could find stood to help the title’s health.

(In fact, Conan would run for over two decades. John Buscema would in fact eventually draw the barbarian for quite a while himself, and do a decent job.)

Windsor-Smith, originally credited as just Barry Smith, grew as an artist almost issue by issue. His command of anatomy became more fluid, the rhythm of his panels became smoother, and his storytelling became both more individual and, concomitantly, more effective.

This matters because comics art isn’t just about the rendering of an illustration, nor even about the choice of angles for a panel. It’s about how the images work together. How the page is structured as a unit, and how the reader’s eye is guided through it while still being presented with the visual information needed to make the story work. 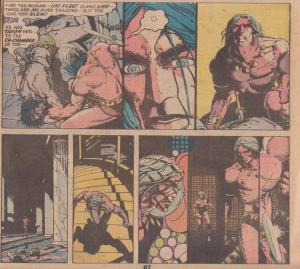 For the first few issues of Conan, Windsor-Smith’s storytelling was still in the shadow of one of American comics’ greatest artists, Jack Kirby.

But super-heroes are one thing; barbarians are another. Windsor-Smith’s early Conan owed a lot to Kirby, but he quickly incorporated Kirby’s lessons into his own vocabulary.

His pacing grew more refined; his panels shrank to focus on details, or opened out to show sprawling cityscapes or battle-scenes. And Conan’s freewheeling brawls became increasingly brutal, perhaps more brutal than any mainstream comic fight scenes up to that time. 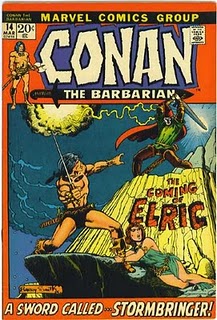 Which was, really, not saying very much. Marvel Comics were subject to approval by the Comics Code Authority, a voluntary regulatory and censorship agency. The strictures of the Comics Code (you can see the original 1954 Code here, the 1971 revision here) tended to infantilise comics, decreeing that violence be handled in conventionalised ways, sexuality be almost entirely avoided, and the forces of good always defeat evil.

You can imagine the problems you’d have faithfully adapting Robert E. Howard stories under the Comics Code.

In retrospect, it’s amazing that the Marvel Conan came anywhere close to Howard. Of course the book had a tone of its own — it had to, in order to succeed. Windsor-Smith may have been exactly the right man for the job.

The beauty and detail of his artwork replaced some of the grimness of Howard, making something new; it was a true adaptation, a re-creation of a work in another medium, losing some of the characteristics of the original in order to find other strengths fitted to the new form.

Barry Windsor-Smith’s Conan comics have been reprinted a number of times, most recently earlier this year by Dark Horse Press in a two-volume hardcover set; you can see details of those books here and here. You can find Barry Windsor-Smith’s web site here, complete with reflections on his Conan run.

I read those as a little kid. I like the current generation of Conan comics much better, but I only blame the shortcomings of Marvel on the CCA and limited technology of the time. BWS was fantastic. I almost miss-in this modern comic- the “Elric” storyline and more importantly the “Living Tarim” one. I’ll say again I truly miss the “Living Tarim” esp. cause the “ending” (won’t ruin it) is SUPER non-PC…

In a way I think Richard Kane Ferguson echoed it in his “Offerings #1” -the Lagan story how the ‘barbarian’ had gotten involved in civilization, started to ‘civilize’ a bit himself but then the war that destroyed it drove him near mad and he ran to the north to ‘purify’ himself.

The modern iteration I love, esp. the “Hyperborea” story and the “Return to Cimmeria” line. Good ways to fill in and explain why Conan left Cimmeria and largely stayed away but also didn’t settle anywhere. I don’t like the “Bone Woman” part and think IMO it’s just to drive the “Red Sonja clone” which IMO could be compensated for (is, rather) since a non CCA and mature comic can have tons of scantily clad ‘wenches’.

Windsor has kept active. Dark Horse also published a limited “Storyteller” super large format comic by him that I eagerly bought every issue. It was sort of a tribute to stories he worked on, but “Done Right” as if he’d written them.

Another note also. Artist wise, though certainly not fit to be in his shoesteps I’m more of the side of the “Self-Taught artist who’s more a storyteller” cause that’s where I fit in. Mostly I like things where the story takes over if the art is workable when it’s done by the combination artist/storyteller. Again RKF who got hijacked by “Magic: The Gathering” is the pinnacle of that. But BWS is in the line of the “Professional and college educated Artist who maybe later tells stories” of which the recently departed Frazetta was the crown.

A little bit of a derivation, but my pick for king of horror comics art is Bernie Wrightson. Brilliant use of color and design top give all of his panels mood and depth. He is a great one when it comes to dark detail.

I think I remember Barry’s name on some of my Conan Saga magazines. Maybe tonight I’ll check it out.

I was just a tad too young when Marvel Comics first started the Conan series. I was an hugh comic book junkie but Conan was just too violent and sexy for my mom to let me bring those home. It was years later before I was old enought that a dared to sneak them in, but a babysitter had a colledge age son, who had them in a box I found. I spent hours riding an imaginary horse and swinging a sword around that house after that discovery.