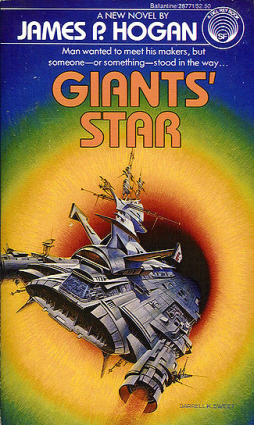 Many years ago, when I was in junior high, I read a science fiction novel that had what I still consider to be one of the greatest endings in science fiction literature.

It was compelling enough that I didn’t learn until years later that I had read the last book in the original trilogy, and what ultimately turned out to be the third in a series of five.

That book was Giant’s Star, and it offered what then appeared to me to be a unique and highly original concept of human origins.

The author was James P. Hogan, and the books of the Giants series are very well worth reading today as they hold up surprisingly well considering the changes in technology that have taken place between now and 1977.

I was very saddened to hear the news of Mr. Hogan’s death on July 12th.  Not only because the SF/F world has lost a very good and innovative writer, but because the world has lost a lively and ever-curious mind.  Earlier this year, in February, I was astounded to receive an email from a “James Hogan” telling me that he had very much liked a non-fiction book I had written; I was sufficiently surprised that I did not believe at first that it was actually from THE James P. Hogan.

But, as it was unlikely any other James P. Hogan, especially not the American filmmaker who was born in 1890, I eventually came around to accepting the delightful truth after an exchange of emails.  Over the following months we exchanged further emails as well as books in digital format and it was a pleasure to have the chance to delve a little deeper into the mind that had created one of my favorite science fiction novels. 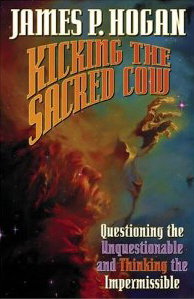 Hogan was, in my opinion, deeply and unfairly misunderstood by many science fiction fans and writers alike.  If you look at his Wikipedia page, for example, there is more information concerning a completely nonexistent “controversy” about his skepticism regarding various scientific dogmas and commonly held historical beliefs than there is about the 30+ books he wrote.  Unlike those who confuse the present state of scientific knowledge for science itself and transform the status quo into a dogmatic fetish, James P. Hogan was dedicated first and foremost to the scientific method.  If the actual science based on proper use of the scientific method was not there to support the accepted scientific dogma, and he demonstrated in his book Kicking the Sacred Cow: Heresy and Impermissible Thoughts in Science that this much more often the case than the average individual would ever imagine, he did not hesitate to question it and occasionally even offer an alternative perspective.

Now, this is not the place to discuss the particulars of scientific heresies such as Velikovsky’s Catastrophism nor am I sufficiently informed on the matter to even have an opinion one way or another.  But there can be no question that Hogan’s interest in Velikovsky had a heavy influence on the Giant’s series, and for that alone the science fiction world should be grateful that one of its own possessed such an open mind.

James P. Hogan was a skeptic, a devotee of science, and an intellectual rebel.  He was a classic example of the man who thinks outside the box and he was palpably unconcerned with whatever the passing fads in scientific or public opinion happened to be at the moment.  If you haven’t read the man’s books, do yourself a favor and read the Giant’s Series… but I would recommend beginning with Inherit the Stars.

I had a similar experience. I’m 21 but when i was 13 or 14 freshman in high school i had to read two books for summer reading. Ender’s game and Flowers for Algernon (spelling?). I was greatly moved by both books. I’ve read ender’s game again since then and last year i read the other 3 books in the ender series. Those books hit me where it counts and affect me emotionally.

I’ll never read flowers for algernon again. While it did suck me in when i read it, it was very depressing and kind of disturbing. I don’t think it was really appropriate for a 13 or 14 year old kid. Those were the only two summer reading books in my four years of high school that i actually enjoyed.

Thanks for that, Theo. If you’re interested, I just last week posted a 1993 interview I did with Jim that I had totally forgotten about since it was first published. I had a great time with Jim, and we nearly finished a full fifth of Bushmills Irish Whiskey during the interview. 🙂

You can find the interview here:

Thanks again for your reminiscences about Jim.

Great interview, Dave. His observation about the openness of the former Soviet bloc and the relative closing of the Western mind would appear to have been particularly astute.

Of course, all interviews flow more smoothly when the parties are sufficiently lubricated.

Just commenting on the cover art, but it reminds me of Disney’s “The Black Hole”…

You know, every time I’m at the used book store, I invariably look for anything new by Robert E. Howard, and nearby are always at least a few works by Hogan. Now that I have read this post, I am inclined to pick one or more up and read them. Thanks for the recommendation!

Yeah, this site gets me into new and “New” aka “Used” book searches.

From an earlier article I did some used bookstore spelunking and actually found and bought TWO copies ($1.50 each) of “Swordsmen in the Sky”.

I am very sorry to learn of this. Inherit the Stars was one of the first books I ever bought “spur of the moment” with my own money, based on the attention grabbing cover and the cover copy on the back. I eagerly read the rest of the giants books when they were still a trilogy, and dipped into his fiction happily several other times over the years. If I never quite named him a “favorite” author, I certainly was fond of his work and thought highly of his writing. The world is poorer for having him gone, and richer for the fiction he gave us.