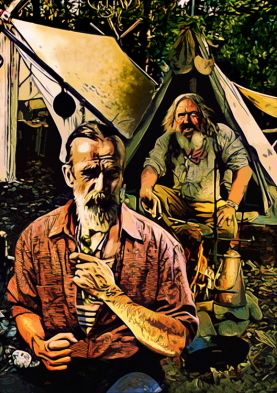 Luke Forney wraps up his detailed, three-part examination of Black Gate 14 with a look back at Part II:

The novellas really took the cake for the middle section, and had me really excited about the last part of this juggernaut of a magazine.

In the closing section he singles out “La Señora de Oro” by R.L. Roth:

This epistolary tale of a man out seeking gold to buy his farm from the bank is very engaging, playing with some nice horror themes, and really drawing out the protagonist’s character. The story races to a conclusion that was plenty rewarding.

And “Building Character” by Tom Sneem:

An entertaining tale of a character being run through a novice writer’s series of stories, this one manages to be both engaging and funny. A nice piece to build towards the end.

He closes coverage of the issue with:

The volume wraps up, as usual, with a Knights of the Dinner Table: The Java Joint comic strip, in which one of the characters plans on confronting Neil Gaiman for stealing his ideas. The extra-long strip was a fun way to close such a large issue, and manages to be plenty funny.

You can find the complete text of Part III here; Part I and Part Two are also still available. The complete TOC for Black Gate 14 is here.