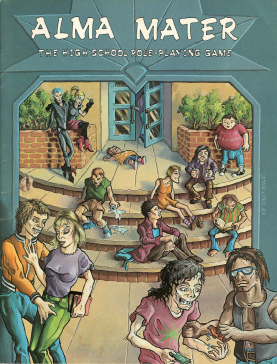 Over at Grognardia, James Maliszewski has posted a retrospective review of one of my favorite RPG relics, Oracle Game’s Alma Mater, the role playing game of high school life in the 1970s.

And I do mean relic. I collect role playing games and, after nearly two decades of fruitless searching, I finally gave up and paid an outrageous sum for an unused copy on eBay a few years ago. It was the last significant RPG title from the era I didn’t own.

It was worth it.  Alma Mater was notorious when it was released in 1982, and it retained much of that notoriety through the years.  It was banned from Gencon by TSR, and well-known artist and editor Liz Danforth wrote a famously scathing editorial in Sorcerers Apprentice magazine attacking the game.

Today though, Alma Mater is chiefly remembered for its artwork, by old-school TSR artist Erol Otus (who did the classic cover for Deities & Demigods, and interior artwork for the AD&D Monster Manual, among many others).  The content of the game itself, as you’d doubtless expect, is fairly tame by modern standards, but the artwork can still raise eyebrows. You can see much of it collected at the Cyclopeatron blog.

I’ve never played the game. Not a lot of people did, as a matter of fact — it quickly vanished, despite (or perhaps because of) all the publicity. Hence its relatively scarcity today, and the delight it still brings to bloodless eBay vulture sellers, may they suffer a thousand deaths.

I’m not sure why more game companies didn’t stumble on this idea — it seems completely natural to me now.  Let’s be honest; not much scares me any more.  My senior biology teacher, Ms. Bray?  She still scares me.

I relive high school (and especially my Calculus final) in my nightmares twice a month, might as well confront all these subconcious terrors with my trusty dice at the dinner table.  Who knows. Could bring me some peace.

As for all the controversy, well.. if you’re going to make a role playing game out of high school, does it makes sense to tone it down any?

Regardless of whether you ever get to play it, Alma Mater is a delight to read. Though, as Maliszewski notes,

Alma Mater is very much a product of its time. The game came with a warning on its back cover… some within the hobby were scandalized by Alma Mater, with its rules for drug addiction, pregnancy, and constructing explosives in chemistry class.

So if you ever stumble across a copy, take a moment or two to enjoy it.

Just don’t put it up on eBay. Your soul doesn’t need to take that kind of beating.

[…] Mega-City One, the Marvel Universe… heck, there were even role playing games about high school, fer cryin’ out […]