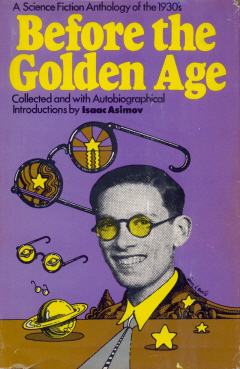 I tend to browse the Black Gate website every day, to check the news and, of course, read the new chapter of “The Weird of Ironspell” every Wednesday. When I read your article about Before the Golden Age by Isaac Asimov, two things immediately caught my interest: “…civilizations in grains of sand…” and “…humans in rags taking on entrenched alien conquerors…” and I knew I had to look into getting this book.
Well, a couple minutes after I finished reading the article, and with my imagination already running wild, I decided to pick up a used copy from Amazon. I was in luck, the 1974 hardcover version by Doubleday was available for only $20. The book arrived today and I already read “Submicroscopic” and “Awlo of Ulm”, the ones that seemed the most appealing, and I can’t say I regret buying the book right away instead of checking out that website you mentioned first. Your article opened my eyes to a wider variety of sci-fi stories and authors, and I just have to say thanks for that 🙂
It’s also a very nice experience to find out about so many old classics that I never knew existed. Your magazine and website are a great source for new (well, new to me) books and authors and I’m sure there’s still a lot more to discover in the archives. So, thanks again for a great website and an awesome magazine, both of which I hope will stay around for a long, long time!

Glad you enjoyed it, Kim.  “Submicroscopic” and its sequel “Awlo of Ulm,” both by Capt. S. P. Meek, are in fact the stories I had in mind when I mentioned “civilizations in grains of sand.”  They first appeared in Amazing Stories in 1931, and they’re still great fun today. 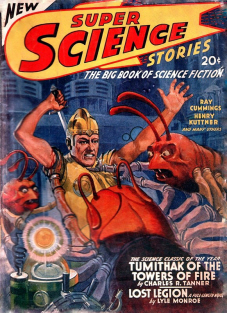 As for “humans in rags taking on entrenched alien conquerors,” that of course is the Tumithak series, by Charles R. Tanner, the first two of which — “Tumithak of the Corridors” (Amazing, 1932) and “Tumithak in Shawm” (Amazing, 1933) — were reprinted in Before the Golden Age.

Asimov mentions the third installment, “Tumithak of the Towers of Fire” (from Super Science Stories, 1941) but admits he never read it.

We reprinted the first three Tumithak stories  in Black Gate 5, Black Gate 6, and Black Gate 7. Those links contain excerpts from each story, along with new artwork by Chuck Lukacs and Denis Rodier, and a history of the Tumithak saga we prepared for the magazine.

With the help of Tanner’s son Jim, I tracked down the fourth and final installment in the series, the unpublished “Tumithak and the Ancient Word.”

It turned out to be a marvelous finale to the series and, with kind permission from Jim Tanner, it appeared in its entirety in Black Gate 12, with new artwork by John Wooley. 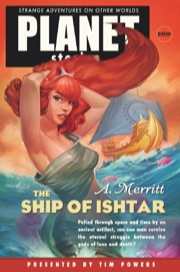 How did I hear about Black Gate? Through the Paizo web site. I’m a Planet Stories subscriber and I  noticed they quoted one of your reviews. I searched and found your site.
While there, I came across a positive article for a Rich Horton Best Science Fiction of the Year volume [here] and I figured since you recognize talent on your website, the magazine must be even better! Can’t wait to get started.
I’ll get back to you about [what I think about] the past issues. The World Cup is on, so I have even less free time to spend reading!

Glad to hear you’re a Rich Horton fan, Charles (not to mention Planet Stories). Rich’s regular articles on the history of science fiction and fantasy have been among the most popular articles in Black Gate.

Write to the editor at Black Gate at john@blackgate.com.

I read “Before the Golden age” by Asimov when I was just a young kid, the stories were quite imaginative, but its amusing now as I remember back just how terrible their understanding of Science was!

“Awlo of Ulm” and “Submicroscopic”… reducing the atomic vibrations, leading to them shrinking, LOL. Its a result of cooling! Energy transmitted without loss, assuming energy could be beamed in a linear and direct fashion as opposed to understanding that even though at the atomic level it would be loss-less, but broadcast in a sphere around the source, so effectively stretched at a ratio of the surface area of a sphere of the radius (distance) from the source…