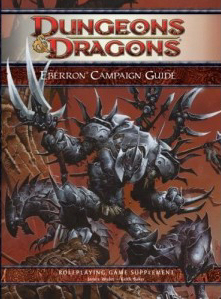 In February we announced we were giving away copies of the Eberron Campaign Guide, a 4th Edition D&D Supplement from Wizards of the Coast.

Contestants were asked to submit a two-sentence summary of a recent Eberron product. The most enthusiastic and literate responses (or the ones that made us laugh the hardest, depending), were awarded the prizes.

We received a wide range of entries, from gushing to gonzo. Our panel of distinguished judges sobered up just long enough to announce that Colin Marco, Luke Forney, Baron Swodeck, and Risen Fiend were the real standouts.

Our judges issued a special citation to Risen Fiend for his particularly insightful and tantalizing two-line treatise on the Secrets of Sarlona adventure supplement:

Secrets of Sarlona unveils a continent under the domination of the immortal Inspired who rule thorough charming guile as much as psionic might powered by their otherworldly connection to the insidious Dreaming Dark. While presenting in detail the homeland of one of the gravest threats to the world of Eberron, Secrets of Sarlona also features one of the greatest hopes against the Dreaming Dark in the stalwart Kalashtar refuge of Adar, allowing heroes to choose their side in this epic transdimensional struggle.

I once dated someone who “ruled thorough charming guile.” I still shudder when I think about it.

Congratulations to all the winners! You’ll be contacted shortly to receive your prizes.