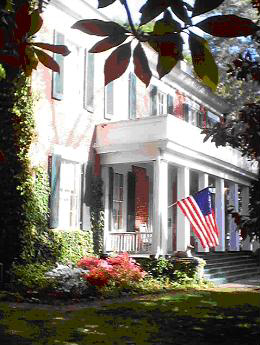 Mr. Goth Chick is a civil war buff and two summers ago on a road trip, we stopped off to tour the battlefield at Shiloh, spending the night at a gorgeous old southern mansion a few towns away, called Magnolia Manor. I found the place on a web search by Googling “haunted hotel Shiloh” (would you expect any less?). When I called for the reservations, the owner informed me that we would need to stay in the guest house behind the main building as the main house was reserved by a ghost hunting group filming a documentary.

Of course through a series of particularly smarmy tactics, I negotiated an invitation for us to join the ghost hunt.

On this trip we were already armed with some of our own equipment such as a digital voice recorder and a high speed video camera, but the leader of the group called Memphis Mid-South Ghost Hunters, was kind enough to provide me with an EMF detector as well.

“Electro-magnetic Frequency” detectors are the hand-held devices you see TV ghost hunters running around with, which measures electrical fields. You can send one buggy by placing it against an electrical outlet or a light switch which is why one of the first tasks I was asked to do was to “map” the rooms by identifying the sources of explainable electrical current. In this way, if the meter started flying anywhere else we would know we were having a close encounter with the spirit world.

Mr. Goth Chick and I followed instructions and spent the evening asking questions of no one in particular in hopes of capturing EVPs (listen to some creepy “electronic voice phenomenon captured at other locations here) and using our camera’s night vision option in the narrow hallways of the old house. 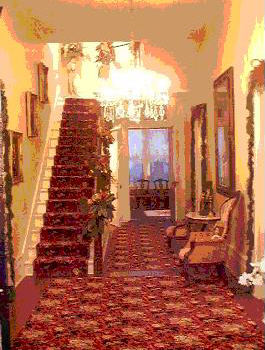 Around 3 am, after nothing unusual had happened, we gathered with the professional ghost hunters in the elegant “sitting room” to turn in our equipment and hear some rather frightening tales of events that had occurred in the house during other investigations. I was seated on the couch facing the fireplace, over which hung a large mirror smoky with age. The EMF meter sat casually on my lap and I glanced down just in time to see the needle leap all the way to the right and back.

Mr. Goth Chick grabbed my hand and asked me if I had just seen that and we sat very still watching it. Then the needle leapt up again and this time it sat there, all the way to the highest reading on the right of the scale. I looked up to get the attention of the facilitator when my eye caught the hallway behind me in the mirror above the fireplace, just in time to see a figure disappear toward the stairs.

Of course, as is true with all great ghost encounters, the real stuff (if there is “real stuff”) happens when the cameras are not rolling or at least pointed in the wrong direction. This was the case with my encounter which was apparently the lady of the house; the original lady of the house that is. Subsequent owners and visitors to Magnolia Manor had reported seeing her almost since her death, though it is usually upstairs in the room that was her bedroom. You can read an interesting story about her and the damaged banister that is still in the foyer here.

Mr. Goth Chick and I have yet to listen to the voice recorder or watch the videos from that night. Though the time that has passed since this happened has made me skeptical of my own experience, neither one of us are quite up to finding out if we captured anything.