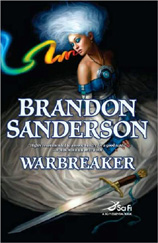 Anyone familiar with the Mistborn series knows Sanderson is expert at spinning fantasy stories packed with memorable characters, crisply detailed settings, unique magic, and major helpings of intrigue. Lately he’s been feted as the writer continuing Robert Jordan’s Wheel of Time series. While I realize that from a purely professional standpoint, the deal was a no-brainer, I hope cleaning up the WoT‘s loose ends won’t keep this talented author from giving us more of his own marvelous work.

Those suffering from “trilogy fatigue” will be happy to learn that Warbreaker is a stand-alone story. Welcome to Hallandren, a vast and mighty empire ruled by God King Susebron. The Hallandren capital T’Telir is a city of wonders and dangers, thanks to the Awakeners, sorcerers who use the color of everyday objects to control the life force called Breath and feed their BioChromatic magic.

Appalled at the innocent lives spent to fuel the Awakeners’ magic, the true ruling family of Hallandren escaped to remote Idris. No one wears color in pious Idris. No one weaves bright tapestries, paints lush landscapes, or glazes pots to a rich sheen, all for fear of Awakener magic. And Idrians born with Awakener abilities strive to hide them at any cost.

But things are about to change.

In the treaty made long ago to keep Hallandren from invading, King Dedelin of Idris agreed to send his daughter to wed Susebron. His eldest girl, Vivenna, has been preparing for this marriage from her earliest days, learning court etiquette, history, literature, dancing — everything you’d expect a proper queen to know. But Vivenna is also Dedelin’s favorite child. Rather than part with her, he sends his youngest daughter: high-spirited, tomboyish, and completely unprepared, 17 year old Siri.

As you might expect, Siri is a fish out of water in T’Telir. Susebron’s court is riddled with intrigue and the God King himself is strangely remote and silent. Returned Gods — supposed heroes restored to life by the god of color, Austre – laze about, kept alive through sacrifice of the faithful for their Breath.

As Siri grapples with court life, rescue is on the way. Wracked with guilt — and also slightly disappointed at being passed over — Vivenna comes to T’Telir to rescue her sister, counting on help from a band of Idrian spies. Unfortunately Vivenna’s lessons in courtly life have done little to prepare her for T”Telir’s unsavory side. Vivenna’s also going to have to face her own untrained Awakener abilities, for here they are her only advantage.

In Susebron’s court, the Returned God Lightsong is also questioning his place. He’s uneasy with having lives sacrificed regularly to provide the Breath he needs to survive. If the Returned are heroes, he wonders, why don’t we ever do anything heroic? He’s got a point: the Returned seem to spend their days in lazy indulgence, more concerned over their next entertainment than the state of the country — especially now with rumors of war brewing and several Returned Gods holding the power to wield a hidden army of Lifeless zombie soldiers.

The man who seems to be at the heart of the novel’s maze of shifting motives and alliances is Vasher, a mysterious Awakener spy who could hold the key to stopping — or starting — the war. If this book were a trilogy, Vasher would be the character who connects the books together. But this is a single fantasy novel, and as it stands, a quite nice one, with room for irony and sarcasm as well as brooding, foreshadowing, some lively action, and even a little romance, all wrapped up in a multi-layered story of believable characters and choices that are far from easy.

Nice review, Charlene. I’ve reviewed ‘Warbreaker’ myself for the next BG, and share a lot of your same thoughts. Sanderson does a great job creating sympathetic characters, and reading a single volume ‘epic’ is a refreshing (and time-saving!) change of pace. I did have some quibbles with the book that I won’t go into here, but I was impressed overall.

[…] few years — starting with the 688-page Warbreaker (2009), which our reviewer Charlene Brusso called “the cure for trilogy fatigue” (not to be outdone, our Reviews Editor Bill Ward also […]