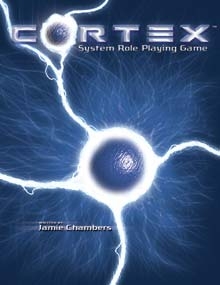 There are a lot of things to commend this book to an experienced gamer. The rules are fairly simple yet cover a lot of ground. I like how the abilities are not really tied into specific stats that are sometimes hard to justify -­ this system is much more fluid. It also is not conducive to rules lawyering ­ and if there is one thing I hate, it is rules-lawyering, so this is a positive for me. I can see where the OCD crowd who wants a rule for everything could be irritated with it, but I game by the principle that story precedes rules, and this rule set is made for that mindset.

Basically, after two or three hours of reading, a game master will feel comfortable enough to run the system. Layout is simple but functional ­ black-and-white and an easy to read font. It’s fairly thin for being the core rules of a game system, but I liked that. It made the book less intimidating than a lot of other systems I have looked at.

Every statistic has a die attached to it, indicating relative strength. An ability statistic is combined with a skill statistic and the dice are rolled to reach a target number to indicate success. The system also makes use of assets and complications to make a character more varied, giving them bonuses and hindrances.

The rules also make use of plot points, a device I am much in favor of. Plot points give the players some control over the game ­ including the environment surrounding them ­ to give them some lucky breaks. Lastly, the rules can be applied to any genre and any style of play. I like that.

What I don’t like are point-buy systems. As a matter of fact, I hate ‘em. I dislike the whole “level-playing field” approach games take these days and prefer the old school “rolling of many dice” method to generate characters.

The only other drawback is that there aren’t a lot of monsters or villains, just a few pages with minimal detail. As thin as the book is, the author could have given up a few more monsters and baddies.

The art is sparse, but good. I would have liked to have seen more, to set a tone or mood. However, since the rules are just a tool-set for any kind of game, perhaps setting too much of a tone would have been detrimental to the purpose.

If you need a rule set that can be used in multiple genres and settings, Cortex is a strong entry. It has been a long time since I was a new game master (I have been roleplaying for more than 26 years) so I don’t know how easy this would be for a person new to roleplaying games to learn, but I picked it up pretty quickly. Overall I give this book a high recommendation, with the caveat that if you are the type of gamer who likes comprehensive rules to cover almost any situation, it’s not for you. This is more for the think-on-your-feet-and-figure-something-out-as-you-go crowd.

In my humble opinion anything by Margaret Weis Productions is at least worth looking at.

I haven’t gotten a chance to see the actual Cortex system yet but I’m now running a “Serenity” campaign for my gaming group…and its rules preceded the advent of Cortex and, if I understand correctly, are very much the same (if setting specific). As you say, the rules make for a very fluid, story-based, and “rules light” game, which I enjoy.