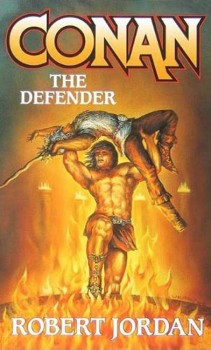 I’ve had some requests on the site and in emails to my own blog from people who have enjoyed previous installments of “Pastiches ‘R’ Us” to look at Robert Jordan’s novels. I’m here to serve. This week and next I’ll feature two of the famous fantasy author’s Conan novels.

Robert Jordan, the pen name of James Oliver Rigney Jr., is the best-known of the stable of writer on Tor’s long-running and now defunct Conan pastiche series. After writing six consecutive books (and the novelization of Conan the Destroyer), Jordan turned into one of the most popular authors of epic fantasy with his “Wheel of Time” series. Unfortunately, Jordan’s career ended early with his death in 2007 from cardiac amyloidosis, only a month before his fifty-ninth birthday.

How does Jordan’s work on Conan stack up? He’s not consistently the strongest of the Tor group—I think John Maddox Roberts deserves that title—but when Jordan first started writing Conan, he created some fresh and energetic material. His first Conan novel, Conan the Invincible (also the first of the Tor series), is pulpily exciting and one of the few pastiches from the Tor books that I recommend to people who normally avoid non-Howard Conan.

Jordan’s second Conan novel, Conan the Defender, takes place entirely in the city of Belverus, and it makes a welcome change from the many novels that have Conan trekking through wilderness wastes (usually in Brythunia—the pastiche authors adore this country) to find lost cities. Jordan digs into the single location and lets the reader savor the personalities and conspiracies of Nemedia, second greatest of the Hyborian Kingdoms.

The story still adheres to one of the most ubiquitous of Conan plot archetypes: the “usurp-the-throne” conspiracy. Conan arrives in Belverus, the Nemedian capital, to find employment. The city is in decline, and unrest grows against King Garian. Lord Cantaro Albanus leads a conspiracy to overthrow the king using magical items he uncovered from a tomb of an ancient Acheron. Howard utilized this sort of device often, most famously in “The Phoenix on the Sword,” “The Scarlet Citadel,” and The Hour of the Dragon. In each of those stories, the conspirators targeted King Conan himself, but in the pastiches a younger Conan gets ensnared in the coup conspiracies, which usually have a sorcerous power leading them.

There is much to enjoy in Conan the Defender, but before listing Jordan’s strengths, I want to point out the novel’s major flaw . . . because it is symptomatic of many pastiches and demonstrates the greatest difficulty any latter-day Conan author faces. For more than half of the book, Conan has scant reason to get involved in the storyline of Albanus and the scheme against the Nemedian crown. He runs into conflicts and action scenes, but not until late in the book does the novel’s titular hero really find a place in the story in the battle against the simulacrum. Jordan provides no major “turning point” or “moment of realization” that seals Conan into the plot and gives him a strong direction.

John C. Hocking once told me that one of the great obstacles he found in writing Conan and the Emerald Lotus was trying to find a way to get Conan into the story in the first place. Conan is an unusual hero, and working him into a plot requires some ingenuity. For other heroes, it is a simple task to motivate them and start their adventures: James Bond’s superiors send him out on assignment; Superman, Solomon Kane, and Doc Savage are driven to right wrongs and protect innocents as part of their ethical code; clients hire Sherlock Holmes and Philip Marlowe. Conan, on the other hand, while possessing admirable traits and a code of honor, is a self-interested character with no singular motivation that easily gets him into the next scrape; the writer must create a new rationale for each story (revenge, treasure, survival, chivalry, etc.). Through Howard’s typewriter, Conan’s drive hurled him into each story, but other writers often have to scramble rather obviously to jam Conan into a new novel so he has a reasonable motivation.

Jordan only half-solves this problem in Conan the Defender, and it hurts the book. Every other chapter, Hordo begs Conan to forget the mess in Belverus and take off with the Free Company. Jordan gives Conan weak excuses for deciding to stay, and only in the last third does the Cimmerian’s choice start to make sense.

Despite this large problem, Conan the Defender makes for a good read. Jordan has the writing chops to pull off the story, and it reads easily. The pages fly past, even away from the furious action. Jordan’s action set-pieces are some of the best and most clearly described from any pastiche author, and he comes up with clever combat ideas. The battle in the palace makes an enjoyable finale.

The only problem I have with Jordan’s writing style is his occasional reliance on archaic English words that feel out of place. For example, he uses ‘an’ as a substitute for ‘if’ too often (and when coming out of Conan’s mouth, this sounds silly). He also tries to get as much mileage as he can out of ‘barbar,’ a shortened version of ‘barbarian.’ Come on Robert, just type the last ‘-ian’! It looks far better.

The story bogs down in places where too many characters get involved in conspiracies, and a few of them never amount to much, such as Sularia and an underused female character named Lady Jelanna. (In general, Jordan overstuffs the novel with gorgeous women, so it starts to sound like a Roger Moore James Bond film.) Some parts of the plot are never explained, such as what Albanus actually needs with the idealistic rebels. However, the story moves fast enough that readers can overlook the bumps in the plot. Principal heroine Ariane is a refreshing change from the “helpless wench” or “tough warrior woman” cliché and has realism to her found infrequently in this kind of tale. In the final third, the action kicks in and rushes toward the exciting finale with the rebellion and the storming of the king’s palace. Jordan even manages to toss in a snappy plot twist that genuinely surprises. Plot twists like this usually do not show up in Conan novels.

Although a lesser novel than Jordan’s excellent first venture into the Hyborian age, Conan the Invincible, I can recommend Conan the Defender as a satisfying if flawed exploit of our favorite “barbar.” (Maybe I should have said “a satisfying an flawed exploit,” but I think that is too archaic for this review.)

enjoyable and informative as usual. I just recently bought Conan the Invincible at a used bookstore.