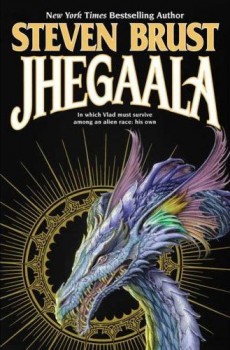 The world of epic fantasy has its Martins, Jordans, and Eriksons, writers at the helm of long-running series with massively convoluted plots and hundreds of characters — and, quite often, no end in sight. But when compared to Steven Brust’s Taltos novels, which debuted in 1983, these long-running epics are Johnny-come-latelys, part of a newer way of packaging fantasy fiction that began with Robert Jordan in the early nineties and shows no signs of abating. Jhegaala is the eleventh book chronicling the adventures of the clever and cynical rogue Vlad Taltos, a character whom Brust has been writing about for twenty-five years in a series that hearkens back to an earlier mode of serial fantasy, the episodic sword and sorcery tale.

Which means, unlike with epic fantasy, a reader can pick up a book in the middle of Brust’s series and not have to worry about needing a wealth of prior plot and exposition to understand it. Jhegaala is perhaps an even better example of this than some of Brust’s prior books, as it takes place completely out-of-context chronologically and geographically with the rest of the series. Vlad, on the run from his own House and exiled from his home city of Adrilankha, travels to his ancestral homeland in the East. There, among his own kind in the town of Burz, he stumbles into the paranoid world of local powers, and begins to unravel a mystery that involves a pervasive guild, a coven of witches, and the ruler of the region himself.

Now, a bit of background is in order for people unfamiliar with this series. Vlad Taltos is human in a world of Dragaerans, which are similar to Moorcock’s Melnibonéans in that they are faster and more powerful, magically superior, and longer-lived than mere humans. The Dragaerans belong to one of seventeen great Houses, each named for an animal and each associated with certain characteristics: the Dzur, for example, embody their lion-like namesake’s nobility and physical strength, while the peasant-class Teckla are as meek and fertile as the rodent for which they are named. Vlad is a Jhereg, one of the few humans admitted into a Dragaeran House, and he worked as an assassin (less odious a profession in a world of reliable resurrections) and thief for his mafia-like House. That is, until he crossed them. Vlad, a human in a world of ‘elfs,’ relies on his wits to survive, and Brust’s convoluted and action-packed plots usually always have a satisfying intellectual component that place them above run-of-the-mill adventure fantasy.

But in Jhegaala Vlad is back amongst his own kind, and he finds human behavior somewhat baffling after his years amongst Dragaerans. Into the small, papermaking town of Burz Vlad, a well-armed and dangerous man with a strange accent and lots of questions, plunges like a stone into clear water, creating ripples through the entire community right up to the highest levels. He is motivated, at first, by pure curiosity, intending to find kin on his mother’s side — Burz just being one more diversionary stop of his exile. Instead, Vlad upsets the delicate balance of forces that govern the town, and finds himself in the middle of a conflict that may not have ever occurred if he hadn’t wandered into town one day and started digging up old information.

Jhegaala is a mystery novel in fantasy clothing, and is every bit as compelling as earlier Taltos novels even though it lacks much of the swordplay and sorcerous happenings at the core of those books. Fans of mystery and detective fiction will not be at all surprised to see a protagonist using guile, intimidation, and charm to uncover the pieces of a puzzle piece by piece, and Brust is a natural at keeping this style of story interesting and fast-paced. On the other hand, readers of fantasy that expect their heroes to dominate the bad guys and win through direct confrontation might be a bit confused as Vlad moves obliquely toward his goal, bullies and cajoles people for information, hits frequent dead-ends, admits his own uncertainty and confusion, and is himself outwitted and outmaneuvered. Jhegaala is so ‘non-standard’ in its approach that it even dares to place its climax off-stage, viewed only through the eyes of Vlad’s familiar while Vlad himself — who set events in motion with a simple bit of deception — lies injured and bed-ridden in his hotel room. A very different kind of hero, and a very different kind of story, than much of today’s secondary world fantasy.

Followers of this series know that Brust likes to play with the storytelling techniques in his Taltos novels, either through framing mechanisms or parallel narratives or chronological jumbling — Vlad Taltos novels are anything but formulaic. Jhegaala is no different; taking its first cue from the creature it is named for, a strange amphibian with an elaborate gestation cycle. The Jhegaala embodies metamorphosis and endurance, and each section of the book opens with a brief description of part of its transformation that parallels to some extent the action of the narrative. Furthermore each chapter is fronted by an excerpt from a comedic play, ‘Six Parts Water,’ another playful way for Brust — who in the past has opened chapters with detailed accounts of multi-course dinners, real recipes, and even Vlad’s laundry list — to suggest parallel themes without taking himself too seriously. And that, in the end, is what makes the Taltos books so enduring; the continual sense of freshness Brust manages to conjure while writing for over a twenty-five year period about this one wise-assed character and his world full of mystery and magic.

This review originally appeared in Black Gate Magazine Issue 13.
__________
BILL WARD is a genre writer, editor, and blogger wanted across the Outer Colonies for crimes against the written word. His fiction has appeared in numerous magazines and anthologies, as well as gaming supplements and websites. He is a Contributing Editor and reviewer for Black Gate Magazine, and 423rd in line for the throne of Lost Lemuria. Read more at BILL’s blog, DEEP DOWN GENRE HOUND.

[…] it won’t hurt you. I swear it won’t.Over at Black Gate today I’ve put up my review of Steven Brust’s Jhegaala,which originally appeared in Black Gate #13. With the next in the venerable series, Iorich, due for […]

Many thanks. As is often the case, I waited for the MMP, then forgot. That’s been corrected.

I think liking or not liking the Taltos series comes down to voice, which is handy. Flip open most of the novels (the first-person ones), read a page, and you’ll have a good idea if you’d like the series.

I never read beyond the first volume, despite a friend who loved and promoted the series as one of his all time favorites.
The lightness of tone, which delighted him, didn’t do much for me. What can I say– I’m Olde Man Grumpus.
What least agreed with me was the extreme prevalance of magic. If I recall correctly at one point a mage uses a spell to chill a bottle of wine. When sorcery is as common as plumbing my old school Weird Tales-cursed and Clark Ashton Smithified soul rebels.