Once upon a time, the Louisiana region known as Acadiana was home to many magnificent plantations . . . but time changed that.

In August, I wrote an article about Robert E. Howard’s southern horror tale, “Pigeons from Hell,” my personal favorite work from the seminal fantasy author. That post contains a full spoiler-filled discussion of the plot, so I won’t recap it here. Although “Pigeons from Hell” has nowhere near the fame of Howard’s sword-and-sorcery work, it has leaped into the comics medium not once but twice . . . and in two completely different ways. On one side is a straightforward rendition, capturing most of what makes the story so powerful. On the other side is a modernization and adaptation that tries new tricks with the same story structure. 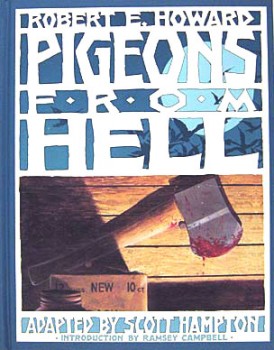 Eclipse Comics published the first graphic novel Pigeons from Hell in 1988 as a stand-alone paperback, with a limited edition hardcover. Scott Hampton wrote and illustrated the adaptation, and Ramsey Campbell provided the introduction. It is currently available in the omnibus The Mammoth Book of Zombie Comics, although reproduced in black and white that misses the glory of Hampton’s original paintings.

Hampton’s trip to visit Howard’s southern horrors is one of the most faithful, if not the most faithful, adaptations of REH in any medium. It has the same brisk and breathless pacing, the same 1930s Gothic southern atmosphere, and the same level of palsied fear. Hampton’s artwork is a seamless meld with Howard’s style: robust and realistic, shot through with shadows. The graphic novel has little in common in its look and “silent” style with most contemporary comic works—either from the 1980s or now—and leaps right off the page because of it. Howard fans who haven’t read it should see if they can dig up a full-color copy.

In 2008, Dark Horse Comics published a four-issue adaptation written by Howard’s fellow Texan Joe R. Lansdale, with artwork by Nathan Fox. The company released a collected trade paperback in January of this year, which also contains notes from Lansdale, an afterword by Mark Finn, preliminary sketches, and bonus artwork pages from guest illustrators—one of which puts Conan into the mix characters.

Lansdale takes “Pigeons from Hell” into modern day, and replaces the two New England strangers who stop at the Blassenville Manor while on a road trip with a new group of characters who come across as Goth rock version of the Scooby Doo gang. (Considering Lansdale’s sense of humor, it wouldn’t surprise me if this was intentional.) Sisters Janet and Claire and their friends Jason, Sally, and Bill, drive out from Austin to Acadiana, LA (Howard never gave a specific location in his story) to see the manor house the two women have inherited. For reasons the sisters do not yet know, the white Blassenville family left the house to one of their former black slaves, the girl’s great-great grandmother. Similar gruesome events to the original story follow in a familiar series of beats, but Lansdale has lenghtened the plot and altered the backstory to give the wicked Blassenvilles a different history from the one that Howard unveiled.

As Lansdale explains in his notes, he never intended to do a straight version of the short story:

I was reluctant at first [to do the project]. There’s nothing wrong with the original story, or with the fine and faithful comic-book adaptation that was done before. But the thought was it might be nice to update it a bit, introduce readers to the story, and perhaps lead them to the original tale and to all things Howard.

Updating was a bit bothersome at first, but I finally got in the spirit, keeping the center of Howard’s story, the heartbeat of it, intact. . . . I was doing an adaptation of Howard’s story, not Howard’s story literally. Like it or not, I let Lansdale slip in. I was hired to do just that, and in no way would I suggest that Howard’s story needs improving, but it’s certainly fun to see an alternate version of his tale 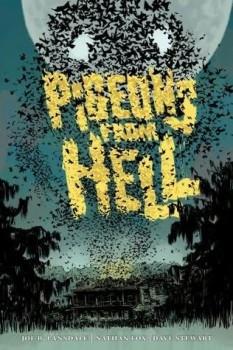 I agreed that it’s fun to see, but it also proves that all the expansion and updating in the world can’t fix what wasn’t broken—as Lansdale obviously realized. The Lansdale/Fox Pigeons from Hell is a swampy and gory good time, feeling much closer to a modern “backwoods brutality” horror flick than Howard’s grim campfire folk story, but it is ultimately a bit of a disappointment when it has to stand in the Howard’s shadow. Modernized, the themes of racism the infuse Howard’s work with such strange subtext tend to evaporate. In expanding the story, Lansdale also removed the shocking sting at the end of the story, moving the revelation that the slave owner is the monster (or at least possessed by it—she’s no longer a zuvembie but the tool of a summoned spirit called the Shadow from the Corn) to earlier in events. This leaves the finale as a standard “Let’s go back and get that thing” action-centered conclusion. The characters return to Blassenville Manor armed with supernatural weaponry and special instructions on how to beat the beast.

The finest section of the Dark Horse version is the flashback narration to the history of the Blassenvilles. Done in sepia with stains of blood, this is the place where Lansdale lets Howard through the strongest, even if the backstory has undergone some huge changes.

Nathan Fox’s artwork (his first solo comics gig) is ugly in the positive sense: everything is bent, twisted, and unclean. Blassenville Manor appears exactly as I pictured it while reading Howard’s story, filled with palpable rot and the fear that any place you step might collapse beneath you. In places, Fox’s detailing of the action gets confusing, which forced me to have to closely examine the panels to deduce exactly what was happening. The Shadow from the Corn looks a bit too much like a modern CGI movie monster, but as it has no parallel in Howard’s original this isn’t too distracting. Fox ladels on immense amounts of brain-spilling and hatching-chopping gore, so even if the graphic novel version isn’t as scary as the prose one, it still isn’t appropriate for more squeamish readers.

Although I, like Lansdale, hope his version will bring some new readers to Howard, I think both of us would agree that newcomers should read “Pigeons from Hell” first before getting the Dark Horse version.

And some publisher should give Scott Hampton’s version a full-color reprint.

The original adaptation of Pigeons is available in colour in the Spookhouse 2 collection.