The first day of GenCon is over and done with. I’ve made it along one and a half walls of the dealer’s room, a massive space in the center of the Indianapolis Convention Center. I seriously believe that the dealer’s room is about the equivalent of half a city block in size, all of it open and full of vendor booths. For those who have never been, GenCon is the major event of the gaming industry, with vendors representing game developers of all stripes – role-playing games, card games (classic, collectible, tradable, etc.), electronic/video games, board games, dice and gaming supply companies – as well as authors, artists, musicians, media personalities, and so on.

For our purposes, of course, the interest is on the adventure fantasy folks, and they are out in abundance this year. I’ve already spoken a bit about the Catalyst Games people and their Shadowrun and CthuluTech lines. Another of my favorite settings is Privateer Press’s Iron Kingdoms, which I’ve reviewed previously in the pages of Black Gate (see issues 10 & 12). With the switch to new fourth edition rules for Dungeons & Dragons, the Iron Kingdoms steam & sorcery line (which is based on the d20 system utilized in 3.5) has been mostly on hold, except for supplements provided regularly in the Privateer Press magazine, No Quarter. I was told that there are plans on the drawing board to continue this line, possibly with a proprietary mechanics system. It sounds like this is very much in the preliminary phases, though, so don’t hold your breath. For now, the only new Iron Kingdoms setting or RPG material that looks like it’s on the horizon will be through No Quarter. 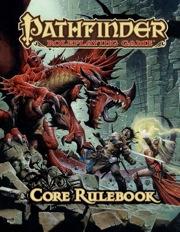 Speaking of Dungeons & Dragons 3.5, it lives on in the form of Pathfinder from Paizo Publishing, this game represents an “evolution of the 3.5 rules set of the world’s oldest fantasy roleplaying game.” This monster rulebook is a brilliant marketing tactic, giving those who dislike D&D 4th edition something to spend their money on so that they can keep playing in the system they grew to love. I’ve personally not played with the 4th edition rules, but I really liked 3.5 and have heard negative things about 4th, so am pleased to see the 3.5 rules system is alive and well in some form, at least.

On to Hollow Earth Expedition, a game from Exile Game Studio that was reviewed in Black Gate issue 12. Hollow Earth utilizes their own proprietary rule system, the Ubiquity Roleplaying SystemTM – which “emphasizes storytelling and cinematic action” (according to their website). The rules are easy to follow, as you play a pulp hero who is performing a Jules Verne-style exploration of the center of the Earth, which contains Nazis, dinosaurs, native peoples, and other strange monsters. In fact, the system is adaptable to a variety of pulp scenarios, with a recent sourcebook, Secrets of the Surface World, allowing for adventures that take place entirely on the surface as well, with mad scientists and secret societies right out of the pages of the pulp magazines. A forthcoming supplement will add to the possibilities by presenting Mars as a campaign setting, allowing for planetary romance genre adventures as well. 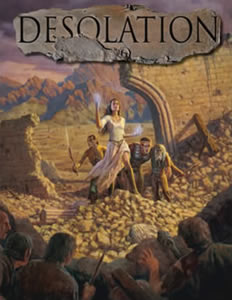 The Ubiquity Roleplaying SystemTM is also being utilized by Greymalkin Designs, LLC’s game Desolation, a post-apocalyptic setting … except that the world that’s been apocalypsed is a traditional high-fantasy world, complete with magical races, powerful sorcerers, and mystical artifacts. The apocalypse took the form of a “Night of Fire” which killed 90% of the population, followed by “The Long Winter” during which many others perished. You play one of survivors and hopes to continue surviving. (The first supplement, which adds new orcs, goblins, and kobolds as player races, along with other additions, is in fact called Desolation: Survivors.) Not only are magic users now scorned because of the belief they caused the cataclysm, mystical energies have become so disrupted that magic itself does not work right, and errors in casting spells result in physical damage manifesting back on the magic user. The series’ tagline “High Fantasy, Brought Low” certainly seems appropriate … and inviting. 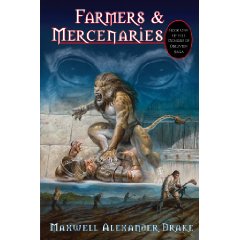 Finally, since this is a magazine of fantasy literature, I figure it would be nice to direct everyone to some free reading material, courtesy of new author Maxwell Alexander Drake. He’s been able to get a publisher to agree to start him out with an astounding 6 book epic fantasy series called the Genesis of Oblivion saga, and the first volume, Farmers and Mercenaries, is now available. Drake is so confident of his abilities that he’s offering the first four chapters of the book for free online (you don’t have to sign up for his mailing list to get the free sample). I’ve read the first few pages and, while I can’t say I’m hooked quite yet, I’m interested enough to keep reading the full sample and see if it hooks me. Book two, Siblings and Rivals, looks like it’s due to be out early next summer.

Regarding the free sample, I gave up halfway through. Maybe it was the “mash on the keyboard” character names, or maybe it was the apostrophe in the city name. Or maybe I still can’t work out why fantasy characters have to speak in awkward Shakespearean English. For me, it’s much more jarring to see a thug say “mayhaps” than to see him use modern vernacular. Whatever ancient language they’re speaking in might translate into our language as such, after all. Perhaps I’m just a jaded fantasy reader, but there wasn’t much there to keep me going.

On another note, I have mixed feelings about Pathfinder. Every edition of D&D seems to have its holdouts, and third edition is certainly solid enough to merit its own following. I’m holding on to my third edition books, just in case. You never know what we’ll be playing in ten years….