I just watched about 25 hours of what I consider the best Sword and Sorcery I’ve seen in about the same number of years.

I’m speaking about HBO’s Rome, of course, the very expensive historical fiction epic that ran for two seasons 2005-2007. I’m sure many of you have seen it, but it was new to me (we don’t have cable). Apart from a few quibbles about some of the portrayals, specifically Cato the Younger and Octavian in the second season, I found it a fascinating peek into another age.

Whoa there, Knight, you may be saying. It’s good sword-swinging drama, but I’d hardly call it Sword and Sorcery.

We can argue definitions for hours, but I’d say it’s 80 percent there, and the 80 percent is so good you don’t mind the missing elements. To me, trimmed to the bare bones, Sword and Sorcery involves a resourceful hero, rings with blade-on-blade (or mace on blade, what have you) combat, mystic gods and spells, fantastic lands, and fabulous creatures to be overcome.

For a resourceful hero I give you Titus Pullo, ably played by the hulking Ray Stevenson. While the series favors, in screen time and dramatic weight, his centurion in the XIIIth Legion, Lucius Vorenus, Titus Pullo is the beating heart of the story. He and Conan would make great drinking buddies. Titus Pullo can fight, drink, whore, gamble, kill, love, hate, regret and rebel with the best of the them, and to paraphrase an old army advertisement, he gives more death and takes more women before 9AM than most do in a lifetime. 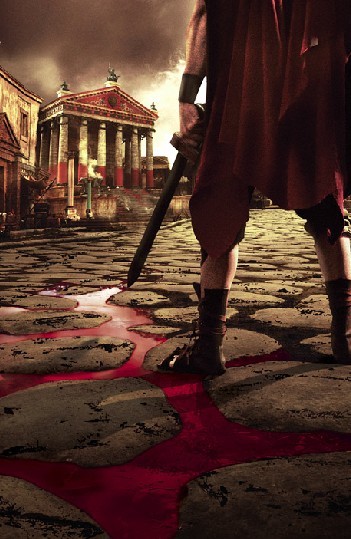 For combat, it’s a rare episode that doesn’t have at least one well-staged scene of swordplay, and it’s a far cry from Errol Flynn fencing with Basil Rathbone. There’s plenty of chaos, dirty tricks and good, old fashioned tendon-cutting and skull-splitting, both in famous battles and back-alley brawls. The many suicides and poisonings are equally dreadful. This is no-blows-barred, brain-splattering realism.

You want sorcerers, mystic gods, and spells? Rome offers fascinating, detailed glimpses of the Roman religions of the high and the low, prayers, sacrifices, curses, herbalists, foreign Egyptian gods and homey offerings to fertility figures by hopeful wives. Who’s to say what magic is? If a cursed person, believing himself or herself to be cursed, changes behavior in a manner that ends in their destruction, I believe a form of magic has been worked, even if it’s just the power of the placebo effect. Religion plays a powerful part in the characters lives and effects international politics: when evidence is placed before the Roman Senate that Mark Antony is worshiping at Egyptian altars, they consider it the last straw that breaks his bond with Rome and leads to warfare between his provinces and the ones under Octavian. A den of thieves who fear no law cower when an idol is broken before them. Good enough sorcery for me, and far more convincing than the usual thaumatic words spoken over sputtering braziers.

For fantastic lands Rome brings to life the one of the largest complexes of sets ever built in film history at Cinecitta’s “dream factory,” a combination of the Roman Forum, back alleys, homes, villas, and the Aventine hill that brought the bustling ancient city to life. From the newsreader in the Forum (complete with advertisements for slaves and flour) to the marketplaces, brothels, gambling halls, and homes of ordinary Romans, we’re transported to another time and place, terrifying and oddly familiar. The story isn’t limited to the city – we see Gaul, the Rubicon and the Tiber, Egypt, Greece and plenty of glimpses of rural Italian countryside. I couldn’t ask for anything more from a Sword & Sorcery epic.

The one area where Rome disappoints is in the “fantastic creatures” aspect. Most of the horrifying monsters are human and for many, challenging them leads to a doom as sure as if you were thrown into a maze with a Minotaur. There’s one oversized gladiator who sort of qualifies as a fantastic being, and of course a few dwarfs and whatnot (is there some Cinecitta union rule about a certain amount of dwarfs being employed in a production? I have nothing against them, but they do show up in Italian productions with clockwork regularity), an elephant or two, but no 300-style war rhinos. Of course they do have two oxen pulling a wagon full of gold in one episode, so that qualifies as magical beasts in a way.

Give it a try. There’s plenty of storytelling magic in Rome and I have a hard time believing that any Sword and Sorcery fan will be disappointed.

Not only does the beating heart of Rome, Titus Pullo, live, but so does Vorenus! Coz Bruno Heller says he lives. And Bruno should know. He’s currently penning the script for a Rome movie, and Ray Stevenson is already on board. Woo hoo!
http://www.facebook.com/group.php?gid=97645771496&ref=ts

Thanks, Nomad. I had a feeling Vorenus might survive — Titus Pullo had every reason to lie to Octavian about a Mark Antony loyalist. Also, it was pretty clear that Titus and Octavian were having one of those discussions where each knew the other was lying, to an extent.

Vorenus lives? Sweet. Glad to hear about a movie.

I agree Rome has just about all the appeal of good sword and sorcery.

It’s such great storytelling, you never miss the sorcery. (Of course, the Romans DO believe in their sorcery, so there is that.)

I loved Rome and am praying that the Rome movie makes it into and out of production. Pullo and Vorenus were actually inspirations for characters in a story I sold to Black Gate, so here’s hoping Rome fans will enjoy that as well.

[…] while ago E.E. Knight posted a nice review of the two-season run of HBO’s Rome, calling it: “about 25 hours of what I consider the […]