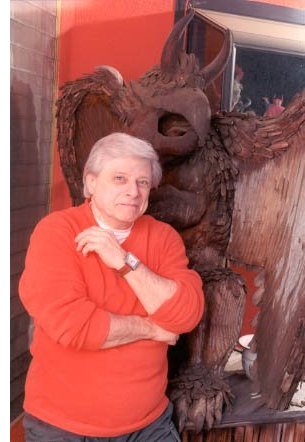 Dreams with Sharp Teeth was more than a quarter of a century in the making; the first footage was shot in the early 1980s and was used in a PBS special; the film-makers kept coming back for more until they had a feature-length documentary (including lots of older material) which premiered in April 2007. It’s about someone named Harlan Ellison. If you have never heard of him, this movie is not your best possible introduction to one of the great American fantasists. If you are one of the legions of people who hate Harlan J. Ellison’s guts, you will not want to see this movie, unless you enjoy the sensation of hating the guts of someone lots of other people seem to love. Anyone not in these two groups will probably find stuff to like and dislike in this movie.

Harlan Ellison escapes from various perils and lives happily (if somewhat angrily) ever after. That was an unannounced spoiler. More details beyond the jump.

An eminent genre author at one point early in the movie describes Ellison as a performance artist who is engaged in a lifelong project entitled “Harlan Ellison.” Later on we hear another point of view: an equally eminent genre author insists that the personality isn’t important: it’s the stories that count. Both these statements come from the same person, Neil Gaiman, oft-seen presence in the movie and close personal friend of the accused the star of our show Harry Fink Harry Kemmelman Ellison. The contradiction might seem to undermine NG’s credibility, but it’s the perfect pair of scenes to define this movie. For the film-makers, HJE is All That–Only More. He is the Best Thing Ever–Except When He’s Even Better. He is a dessert topping and a floor cleaner.

If this sounds like I am one of the Ellison-haters of the world, I am really really not. I think Ellison’s best work puts him among the greatest fantasists who have written short fiction in English. Mark Twain great, Ursula Le Guin great, Lord Dunsany great: that’s how great. He’s also a fiery and able controversialist who can apparently engender myths by walking across a room. Both these things are interesting; both of them make for great footage, especially since Ellison is a practiced performer of his own work.

There is some wonderful stuff here. The film starts with Robin Williams reading a list of Ellison legends, and Ellison saying “True” or “False” and expanding on the true ones. He admits to mailing a dead gopher to a publishing house–in high summer, no less. He admits to breaking a TV executive’s pelvis during a production meeting. He denies having thrown someone down an elevator shaft. It’s great–my only quibble is that I want more details: what publisher? what was he mad about? That background stuff might work better in a memoir than a movie, though (and some among us will be pleased to hear that the reticent HJE has apparently signed a deal to publish an autobiography). The scenes with Robin Williams are mostly good, reminding me why I like Robin Williams (when he’s not trying to egregiously warm people’s hearts).

HJE: I want to have your children.
RW: Yeah, well, I’ve got three. I’ll send one over.

RW may overdo the ethnic humor in some riffs, but there’s no question whose side he’s on.

But it’s not all gold. Oddly, some of the things I found most problematic were the stretches where Ellison was reading Ellison. As a reader he has a stagey manner that doesn’t always play well on camera, and when he thinks he’s reading something Important and Impressive an odd pseudo-British tone infects his voice: “Kirk says, ‘Who AHHHHH you?’ ‘We are the GAHHHdians of ForevAHHH.'” Even the short stretch of “‘Repent, Harlequin'” that he read didn’t work for me. He may be too practiced a reader of his stories now, and, like the actor scorned by Cyrano, “heaves up–ugh!–like a hod-carrier lines that ought to soar on their own wings.”

The rants are better than the readings, even when they seem to be self-conscious performances; his delivery, his timing, his performance of the character Ellison are perfect. And the rants are full of lines which are great because they don’t grasp obviously at greatness. (“I sell my soul–but at the highest rates.” “I pissed on his shoe.” And so on.)

The worst thing about the movie was its somewhat claustrophobic atmosphere. It is very much an authorized biography, and everyone speaks in hushed tones about how great HJE is or gingerly expresses defenses of why he does the things he does. What things? Ssh. You are in error: no one is screaming.

Well, so what? I did not expect, nor would I want, some sort of TMZ-style hatchet-job on Ellison. But there were strange, obviously deliberate omissions. Footage was shown from 2006 when Ellison received his Grandmaster Award from SFWA. Footage was shown of Connie Willis. Nothing was said at any point of the controversy that had the blogosphere blogosploding later that year. The silence was deafening to me, drowning out the soundtrack at that point. A number of references were made to Ellison’s lawsuits–but some of the hairier and more notorious lawsuits were left out (e.g. the Fantagraphics imbroglio). It seemed like a cosmetic choice, a very let’s-not-go-there choice… and, consequently, a very non-Ellisonian choice.

But the film-makers create some great moments, too. In one scene, Ellison reads from “All the Lies That Are My Life”: the passage is about the various outsiders who are drawn to fandom. As he reads, the background displays a moving line of bright cartoonish figures in low focus. As he read, his image became less focused, the colors brightened, and the image moved back to join the parade of fans: he is one of the people he writes about–not an outsider, mocking; an insider, testifying. The editing, weaving all these short scenes into a relatively seamless whole, was wonderfully done.

And you haven’t lived until you’ve witnessed Ellison screaming, “Susan! Would you bring the hat and the glasses?” with an udder-shaped goiter hanging from his neck.

Among the extras on the DVD is a set of readings by Ellison. I was not crazy about most of them, as I indicated above. But I have to mention “Prince Myshkin and Hold the Relish” which is a pretty good story told brilliantly, as HJE pulls out each and every conceivable stop and a couple that weren’t. My son watched part of it with me and he had two comments, “When does he breathe?” and (quoting Lewis Black) “I don’t have enough breadcrumbs to get home.” So maybe it’s not for everyone. I thought it was great, and it made me want to hear him read “Up Christopher to Madness” (his collaboration with Avram Davidson). Among other things.

This movie is not as good as it could have been if it had emulated the spirit of its subject and been a tad more confrontational. But then, maybe, it never would have been made at all. In any case, the movie is what it is and Ellison is who he is. Both are worth keeping an eye on.

Great review, James, and I agree the perspective was one-sided on what was otherwise a great documentary. It really was a celebration of Harlan as icon, which is no bad thing, but it did shy from both controversy and significance.

The rants were definitely better than the readings, and ‘Repent Harlequin’ is one I squirmed through as well — but then I was never all that impressed with that story to begin with.

Anything else of value on the DVD extras? I saw it on cable, I’m curious if I should pick up a copy or not.

He is a dessert topping and a floor cleaner.

My favourite line, but the whole review was wonderful and I’m going to have to track this down.*