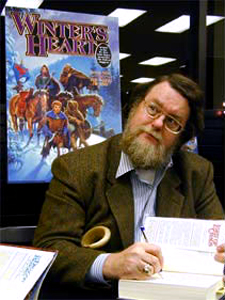 James Oliver Rigney, Jr. (1948Ã¢â‚¬â€œ2007) was one of the most popular authors in the fantasy field for decades. Writing under the pseudonym Robert Jordan, he continued the adventures of Robert E. Howard’s Conan in a series of pastiches in the Ã¢â‚¬â„¢80s, and built a name as a new fantasist worth watching. This was followed by his epic series of unprecedented scope, The Wheel of Time, which became a monstrous bestseller that delighted legions of fans — even as some began to fear that Jordan’s popularity and style would corrupt the genre’s soul. Now he’s suddenly gone, leaving his immense masterwork unfinished.

What will Robert Jordan’s enduring impact on the field be? Have we lost a revered master? A prodigious hack? Some combination of the two? Black Gate‘s Leo Grin analyses the meteoric rise and tragic fall of one of the most influential fantasists of modern times.