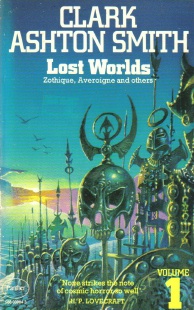 Clark Ashton Smith was one of the most influential authors in modern American fantasy. Along with H. P. Lovecraft and Robert E. Howard, his early contributions to Weird Tales virtually created Sword-and-Sorcery, and his tales are still considered among the very best the genre has to offer.

In 1932 Smith found the ideal setting for his poetic and dark imagination: the last continent of dying Zothique. The sixteen stories, a poem, and one-act play that constitute the Zothique cycle contain some of the most superb examples of Smith’s fiction. The far future continent, which Smith imagined “will arise millions of years hence and will witness the intrusions of things from galaxies not yet visible,” is the final stage of life on Earth.

In his third article on Smith’s fiction, Ryan Harvey examines the Zothique cycle in detail. Join him in a tour of the last human civilization, a land where “New stars without number had declared themselves in the heavens, and the shadows of the infinite had drawn closer. And out of the shadows, the older gods had returned to man. . . And the elder demons had also returned, battering on the fumes of evil sacrifices, and fostering again the primordial sorceries.”