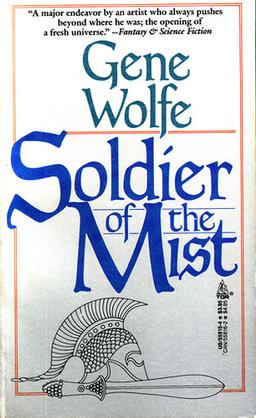 Peter Bebergal — who penned a thoughtful analysis of Michael Moorcock for The New Yorker back in January, “The Anti-Tolkien” — is at it again. This time, he takes a look at the often challenging work of Gene Wolfe.

He kicks off the article with some insightful comments on the 1986 fantasy Soldier of the Mist, the first novel in Wolfe’s Latro trilogy, centered on the adventures of a Roman mercenary with a perplexing ailment.

Having suffered an injury during the Battle of Plataea, a Greco-Persian War skirmish, Latro has no memory of his past. Each night, he writes the day’s events on a scroll; the next morning he reads the scroll to bring himself current. Latro has to carefully choose what he is going to write down: he is limited by time, because when he sleeps he loses his memory again, and by the medium, because there is only so much papyrus. It is hinted that Latro’s wound was caused by the meddling of the gods… It could be the case, however, that Latro’s wound causes him to hallucinate.

On the phone from his home in Peoria, Gene Wolfe explained to me recently that Latro’s memory loss does not make him an unreliable narrator, as many critics assume. Instead, Latro might reveal only the truth that matters. Latro must ask himself, Wolfe said, “What is worth writing, what is going to be of value to me when I read it in the future? What will I want to know?” These are questions that Wolfe has been asking himself, in one form or another, for decades. His stories and novels are rich with riddles, mysteries, and sleights of textual hand.

I’ve had the wizard night series on my shelf for a long time. But I’ve never managed to pick it up.

I’d be curious to know where to start with Gene Wolfe. I bought “Peace” used many years ago, but never actually read it. I’ll do a binge on him sooner or later, as he seems like the kind of author I’d love.

I’m tempted to say the New Sun books (Shadow of the Torturer et al.) — they were my entry, and they’re arguably his most conventional SF/fantasy. They’re incredibly baroque, dense novels set in the far future a la Dying Earth; they present as fantasy but the underpinnings are all SF.

Otherwise, there’s the Wizard Knight duology, or just about any of his standalones or short story collections — choose something that looks interesting based on the description. Be warned: He doesn’t cut the readers any slack whatsoever; and especially in some of his more recent books, he’s fond of telling the story by what gets left out — you’re left on your own to infer that some fairly major events happened off-stage.

If you can read the first page of The Shadow of the Torturer and turn back, you’re made of different material than I am.

I’ve never managed to begin reading Gene Wolfe. Usually, when people describe what they think is awesome about The Book of the New Sun, they say something like, Imagine a torturer — he’s really untrustworthy and self-serving — is torturing this girl, and then he mercifully gives her a chance to kill herself… It’s the same problem I have with Moorcock fans’ enthusiasm about Elric’s sociopathy. I always want to say, Try spending a few years as that girl, and then see how much you want to read about that guy as a hero.

The New Yorker piece is the first place I’ve seen it mentioned that Severian eventually puts an end to torture in his world. I can see why people would hesitate to throw in a spoiler of that magnitude, but now that I can allow myself to believe that Severian will eventually redeem himself, maybe I’ll be able to read Wolfe.

Wow. Sarah, without knowing any of the people you describe, may I suggest that the problem may lie more with the describers than the work being described? I found the Book of the New Sun to be a deeply humane and moral work.