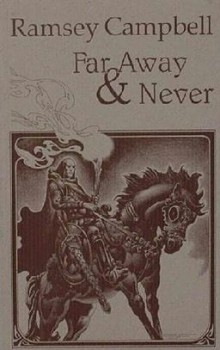 Ramsey Campbell is considered one of the most important and skilled writers of horror fiction. His earliest stories, Lovecraft pastiches, were collected and published by Arkham House as The Inhabitants of the Lake and Less Welcome Tenants (1964) when he was only eighteen. Within a few years he was routinely being nominated for, and often winning, various major awards for his original works of contemporary horror such as The Doll Who Ate His Mother (1976) and The Parasite (1980). He has also edited and co-edited several stellar collections of horror stories, including New Tales of the Cthulhu Mythos (1980).

Any connoisseur of fine fright-fiction should know all that. But did you know he spent a bit of his considerable literary energies composing some top-notch sword & sorcery stories in the late seventies? Well, he did. The slim volume Far Away & Never (1996) from Necronomicon Press collects the seven heroic fantasy stories he wrote back in the seventies. Six are set on his mythical world Tond; four are about the mercenary and adventurer, Ryre. All of Ryre’s tales were published in Andrew Offutt’s terrific Swords Against Darkness anthologies.

In the highly informative forward, Campbell explains how he created the world of Tond. It first appeared in an excerpt of The Revelations of Glaaki, his contribution to the Cthulhu Mythos library of invented blasphemous tomes, in the story “The Inhabitant of the Lake.” Infatuated with Clark Ashton Smith’s “The Abominations of Yondo,” he was determined to use Tond for a complete story, resulting in “A Madness from the Vault.”

Campbell found himself revisiting Tond when he wrote “The Stages of the God” and “The Song at the Hub of the Garden,” both somewhat dreamy stories of characters seeking refuge and finding nothing they expect. Both are infused with a hazy dreaminess redolent of Clark Ashton Smith’s stories. “Hub” is more of a story than “Stages,” and more enjoyable, but neither is particularly memorable. 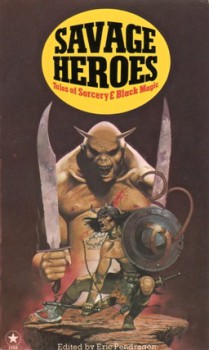 It’s in the four Ryre stories that Campbell finally creates true S&S. “The Sustenance of Hoak,” “The Changer of Names,” “The Pit of Wings,” and “The Mouths of Light” pit a fierce wandering soldier against a variety of human villains and disturbing, original monsters. Each story is remarkably dark and creepy, and serves as a potent reminder that the line between S&S and horror can be very thin. In each case the central idea is one that he deemed too outrageous for the real-world horror he was writing at the time.

In “The Sustenance of Hoak,” Ryre and his comrade-in-arms, Glode, having spent their earnings from helping clear out a nest of pirates, have followed a treasure map to the town of Hoak. After suffering from misfortune that leaves Glode near death, they discover Hoak is a rotting village of listless citizens who seem to be in thrall to a disgusting idol.

It stood twice his height, half again as broad as his chest. Its domed crown was a pale bubble swelling up the black cracking mud of its bark. On the side nearest him, formed of the same lividly patched substance, was the flabby contented face, several times enlarged. Its left cheek was bloated out of shape by a large fibroid growth, giving it a fattened cheek-pouched appearance. Ryre felt grubs of disgust crawling over him.

In “The Changer of Names,” the strangest of the four tales, a mysterious man named Lith changes the names of men to those of notable warriors, also conferring on them some of the warriors’ traits. Ryre is incensed when he encounters someone with the name of a dead friend — it’s his name and his deeds that make a man important. He decides to find Lith and put an end to him. Of course things aren’t as straightforward as mere name-changing and there is a monster. There’s some great weirdness on display here as well as interesting questions about what happens when a man’s reputation is stolen.

“The Pit of Wings” is a straight up monster story filled with horrific imagery. To keep order and power, a town of slaveholders sentences all who offend them to “fly” — to be given over to bat-winged creatures:

Flapping down from the pale sky, in a flock which stank of caverns and worse, came wings. Their span was greater than the spread of his arms. They were the blotchy white of decay; between their bony fingers, skin fluttered lethargically as drowned sails. All this was frightful — but here was no body to speak of between each pair of wings, only a whitish rope of flesh thin as a child’s arm. Yet as a pair of wings sailed down near him, Ryre saw a mouth gape along the whole length of the scrawny object. Its lips resembled a split in fungus, and it was crammed with teeth. 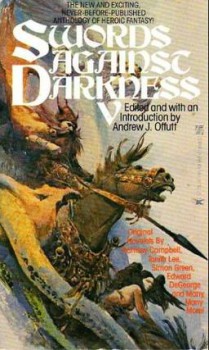 Ryre’s adventures came to an end with “The Mouths of Light” in Swords Against Darkness V, when the publisher, Zebra Books, decided they wanted out of the fantasy business. Here Ryre becomes involved with a group of impoverished fishermen searching for a treasure. More monsters, more inventive craziness, and a downbeat ending make this a fitting end to Ramsey Campbell’s tenure as a S&S author.

Four stories, four, and each is worth twelve Lin Carter stories. This from an author whose main output is not swords & sorcery. It’s interesting to see how small a part enthusiasm plays in crafting a moving work of art. Imagination and talent are far more important to the creation of a memorable story.

In 1977, Jonathan Bacon approached a passel of notable heroic fantasy authors to complete a Robert E. Howard fragment in round-robin fashion. In addition to Ramsey Campbell, Charles Saunders, Michael Moorcock, and Adrian Cole, a ton of others contributed to this undertaking which was called Ghor Kin-Slayer: The Saga of Genseric’s Fifth-Born Son. Campbell’s chapter, “The Ways of Chaos,” is the final entry in “Far Away & Never” but I haven’t read it yet.

Without the full book, I didn’t want to read only an excerpt from Ghor Kin-Slayer. I also haven’t heard any good things about it so I don’t see myself rushing out to find it anytime soon.

This gem of book is still available from Necronomicon Press. In fact, looking at their site a few moments ago, it was on sale for the low price of $6.75. With a great black-and-white Stephen Fabian illustration gracing its cover, this is something every self-respecting S&S fan should have.

Cambell’s Ryre stories are some of my favorites. It’s a pity he didn’t do more, but his urban horror is pretty darn good also.

[…] Swords & Sorcery Gold from a Master of Horror: Far Away & Never by Ramsey Campbell […]