Hey everybody. Welcome to the second of a three-post series on selling short fiction. Last time, I talked about knowing the markets and how your own writing fits into them. This week, I want to talk about sales, contracts, payments, and what rights you’re selling when you sell short fiction. This blog post is in no way a sleep-aid, despite the fact that the last sentence included the words sales, contracts, and rights.

To snap you awake, let’s assume you’re new and you’ve written something. What’s your second worry, after worrying about backing up your masterpiece of short fiction? That nobody steals your shit! You’ve heard about Siegel and Shuster. DC owns Superman. Same with Batman. They sold the copyrights.

You’ve probably heard some variant of “brilliant-but-shy-artist-shows-his-genius-to-a-Hollywood-producer-who-says-no-and-three-years-later-sees-his-magnum-opus-on-the-big-screen-with-all-the-names-changed.” I’ve felt that fear. I’ve written stuff I thought was genius. Hahahahaha. No, seriously. People are worried about losing what they created.

So, first thing: You own it. Only you can sell the rights. And the rights you sell are always described in a contract, that you can choose to either sign or not sign. So, sigh of relief. Let me explain what you are being offered by way of example.

The easiest and most classic example is selling a short story to a print magazine, like Analog, Asimov’s, and On Spec. I’ve sold to all three, and in general, they are buying First English language Serial Rights. This means they get to print it in a serial medium (a magazine) in English, once.  All other rights not outlined in the contract are still mine. Easy, right? 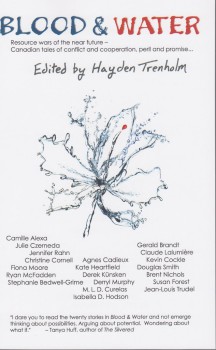 What are the other rights? There are lots. Dramatic rights. Audio rights. Translation rights. Merchandising rights. Electronic rights. The rights are all yours. They also come in two important flavors: exclusive and non-exclusive. Non-exclusive means you can sell those same rights to as many publishers as want to buy them. Exclusive means you sell those to one publisher, although a period of exclusivity can be time-limited.

Can someone buy additional rights? Sure. Asimov’s and Analog also produce e-editions of the magazine, so their offer on a story also includes a certain amount of cash for that, and the agreement by the author (me) not to exercise my e-rights for nine months, and any other rights for one month after publication (like audio, dramatic, etc). This makes sense. They invest in my work and want a chance to make a return on that investment.

What about anthologies? There are lots of anthos, right?

Yup. I’ve sold short stories to small press anthologies like Blood & Water. Here, I’m not selling First English Language Serial Rights, because an anthology is not a serial. Instead, I sold anthology rights. It’s mostly the same thing, because after you’ve sold these, your work is considered a reprint by all other markets because it’s been published, so you can’t sell First English Language Serial Rights, because somebody else got it first.

One thing about magazines and anthologies is that a story quickly becomes unavailable, so once it is a reprint, you have some other business decisions and opportunities. But there are other times when you are selling to an online magazine, or even an email magazine. Your stuff never goes out of circulation. That can be both good and not good.

I sold a story called “God Thieves” to Beneath Ceaseless Skies. It’s still up because BCS was paying good money for First World Serial Rights, First World Electronic Rights (which to my non-legal mind strike me as the same thing, but I’m sure they have a good reason for it), Non-Exclusive World Audio Rights (which they did not exercise), and an Option to buy Non-Exclusive World Anthology Rights (which, happily, they did exercise, thereby paying me more money). 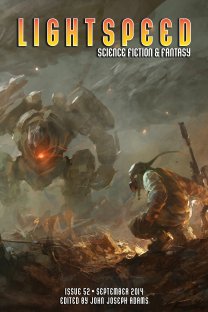 The good and not good I’m talking about applies. “God Thieves” is on BCS and I’m proud it is. When people want to read something of mine, I can point them at BCS and the story is in a professional-looking spot. BCS makes me look good. But because it’s online there, I feel that it might be a harder sell as a reprint. Lightspeed and Clarkesworld do similar things.

Some online magazines have contracts that allow you to ask that the story be taken down after a certain amount of time. Some, like Daily Science Fiction, leave me much less control, so I’ve felt nervous sending stories there. They send their magazine stories out by email each day, then on the website, their RSS feed, and then archive on the website. It’s a really innovative business and distribution model and I have friends who sell to DSF happily, so maybe it’s just me. DSF also pays as much as Asimov’s.

Wait! We haven’t talked about payment! Payment is one of the fun parts. I like contracts where I get paid on acceptance. First of all, my money comes faster. As well, if I’m not sure of the solvency or economic model of the publisher, I’m protected in that if they go under, I’ve at least been paid.

Sometimes, payment is on publication (later), or in royalties, in which basically, you as the author are sharing the risk the publisher is taking. If she/he makes money, so do you. If she/he doesn’t, neither do you. It’s a lot like betting, and so I haven’t submitted to anything that pays in royalties. My choice. To each their own.

Contracts inevitably come with a few conditions which are all pretty common-sensical. You know, like asserting in the contract that you own the work. Also, that you didn’t plagiarize it. Also, if there are legal problems with the work (like you are sued by someone in the story), it’s your problem, not the publisher’s. Those are no-brainers

So, there are lots of ways to sell a story. They may ask for different rights, but in essence, you give some amount of rights to your story to a publisher, and they pay you. Good work. (Just never sell the copyright…)

In two weeks, we’ll finish this series with reprints, which is basically more money for no new work.

Black Gate » Blog Archive » You Know My Methods, Or, How Do You Write?

[…] at home, but others, like my good friend and fellow Black Gate contributor Derek Kunsken (check out his series on selling short fiction) have other methods. Derek gets up hours before he needs to be at work (I […]

[…] talked about how to know how to fit your story into the ecosystem of short fiction markets and what the business side (contracts, rights, etc) look like. This one is about […]