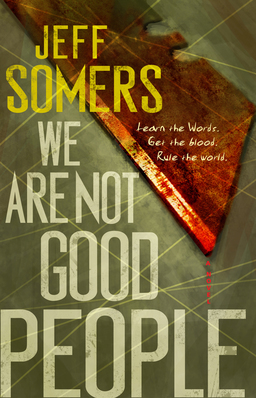 Jeff Somers has made quite a name for himself as an SF writer. His first novel, The Electric Church (2007), launched what eventually became know as the Avery Cates series (five volumes, including the most recent, The Final Evolution in 2011.) He’s less well known as a fantasy writer. His first fantasy novel, Trickster, published by Pocket Books last year, introduced Lem and Mags, two unlikely heroes in an underground world of blood magic. But Trickster was only the first half of the tale, and now it has been re-packaged with the second half and re-released by a new publisher as We Are Not Good People.

Ethics in the world of blood magic is gray at best. Unbeknownst to most, powerful mages have orchestrated disasters — plane crashes, floods, wars — for centuries to fuel their spells with blood. Lesser practitioners, Tricksters like Lem Vonnegan, work smaller magical grifts to eke out a living using only their own gas. For refusing to bleed innocents for his spells, Lem has pretty much condemned himself and his massive, dumb sidekick, Mags, to a life of transient poverty. So when the pair finds Claire Mannice, marked with runes of deep magic and stuffed inside the trunk of a car, Lem knows the rescuing her may be noble or may be infatuation disguised as redemption. Either way, it is most definitely fatal.

For the world’s most powerful mage, Mika Renar, has earth-shattering plans for Claire — and the old woman has noticed their interference. Hopelessly outclassed, and both intrigued by the mysterious girl and devoted to protecting the pet-like Mags, Lem engages his Trickster knack for misdirection and survival to follow the trail of ling cons that Renar and the other archmages have going.

But even if Lem and Mags win, they can still lose. Dealing with the kind of power that doesn’t heed mercy — or death — the duo is fighting for nothing less than reality itself. For magic is nothing but cons all the way down.

We last covered Jeff Somers when we linked to his Huffington Post article, Fantasy Series Better Than Harry Potter. We Are Not Good People was published by Gallery Books on October 7, 2014. It is 514 pages, priced at $16.99 in trade paperback and $12.99 for the digital edition.