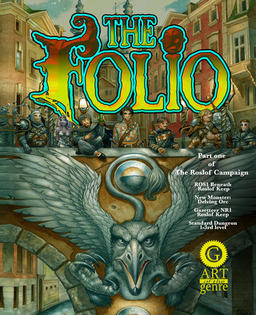 Okay, technically Scott Taylor’s The Folio isn’t the first Kickstarter campaign I’ve ever backed. I think that was probably Grim Dawn, the computer RPG from the creators of Titan’s Quest. Plus the Veronica Mars movie. But I only did those because my kids begged me.

So, yeah, I think Scott’s The Folio may be the first campaign I’ve backed on my own. It hasn’t been hard to stay away from Kickstarter so far… there’s been plenty of intriguing projects that have tempted me but, between eBay and Amazon, I already have enough high tech platforms draining my finances, thank you very much. As a collector with poor impulse control, it’s been safest just to stay away entirely.

What’s so magical about The Folio that’s undermined years of careful self-control? Well, first, there’s its creator, Scott Taylor. Scott’s been blogging at Black Gate for many years, and he was a contributor to the print magazine before that. Scott is enormously talented, with five published novels to his credit, not to mention the highly acclaimed shared-world anthologies Tales of the Emerald Serpent and A Knight in the Silk Purse, which he published and edited.

I’ve wondered for years what Scott could do if he focused his considerable talents on the gaming industry, but with The Folio, he has surpassed even my high expectations. The Folio is an ongoing adventure module series using 5th Edition mechanics, adapted to multiple genres.

Each release will be 8″x11″, with a removable stand-up cover, just like old-school adventure modules. Written by Scott Taylor and Mark Timm, with eye-popping cover art from old school masters, each module will contain maps, a Gazetteer, a monster section, a new monster unique to the setting, DM’s notes and guides, a full adventure, and even an illustrated short story in PDF form. Just check out the gorgeous 3D sample map!

There’s lots more I could tell you, but instead I’ll simply point you to the Kickstarter page and urge you to check it out. If you like what you see, consider making a pledge and helping this exciting project become reality. It’s your opportunity to get in on the ground floor of the gaming release everyone will be talking about in six months.