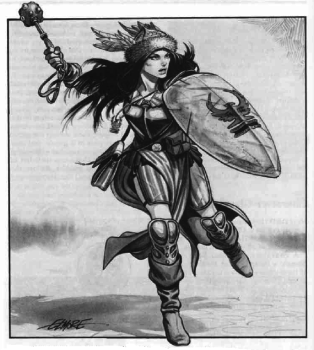 Today I’d like to talk about something I call, ‘Making your own way.’  Honestly, I just made that up, in case you were wondering, right here in my bed as I write this at 5:53 AM on a Sunday morning.  Couldn’t sleep, you see, and sometimes you’ve just got to get stuff out of your head.

Anyway, back to the topic at hand, which in essence is creationism in pre-established role-playing canon.  You see, I’ve been writing a series of blog posts on the art of the 1983 Mentzer Basic D&D Red Box [Part One and Part Two] over on my Art of the Genre site and as I dipped into that nostalgia pool I couldn’t help but be motivated to dig a bit deeper.

I’d recently started gaming with my eight-year-old son, an experience that has been both a joy and, oddly enough, more difficult than I’d imagined it would be.  First, he’s still pretty young for an RPG, probably two or three years too young, but more importantly, as I played out each scenario, I started to wonder if I was too old!  It certainly seemed harder and harder to tell the story I wanted, to get motivated to be a dungeon master, and when I really thought about it, I realized it wasn’t really about either of our ages, but instead about the place in life I was in.  The everyday stress had gotten me down, but after looking at it that way, I was able to knock off the rust, do what gaming does best, and let myself forget the troubles of existence and then concentrate on the adventure!

So I started out just as I had with my ‘Gaming Week’ friends back in 2011, in a little province of my Nameless Realms I call Oakshire.  Oakshire was inspired by the Basic D&D module Keep on the Borderlands and I used it as the basis for an ongoing campaign that still persists today, but in the case of my son’s mini-campaign, it was more simply a backdrop for the Mentzer intro adventure and first solo adventure from the previously mentioned Red Box.

Instead of the unnamed ‘Borderlands Keep’, I’d renamed the last bastion of civilization along the frontier ‘Roslof Keep’, after my friend Jim Roslof, who had done the cover artwork for Keep on the Borderlands and had also passed away in March 2011.  When I told my son about the Keep and its name, he of course asked for more details, to which I explained the story of Jim and why it bore the name it did.  To this he replied, ‘How can you do that?’  ‘What?” I asked.  ‘Change the name of something in a book?’ he explained. 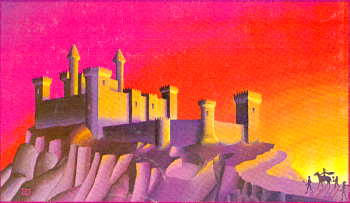 And there you have it, the very heart of ‘Making your own way.’  To me, art is a vehicle, something you can step into and it takes you someplace.  Like everything in D&D, it should be flexible, able to be crafted, and certainly able to be changed for the purposes of a better gaming experience for all involved. When Gary Gygax wrote his infamous quote concerning how the DM is always right and the rules are to be broken (I’m paraphrasing here, but you get the idea.) in the back of the Dungeon’s Master’s Guide, I don’t think he had artwork in mind, but that doesn’t mean it can’t apply to it as well.

Why not name an unnamed Keep after the artist who helped make it so popular (although he never actually rendered the keep at all; those credits go to Erol Otus on the back cover and David Sutherland III for the map)?  It was a tribute, and I simply told my son, ‘The beauty of this game is you can do anything you want, and only your own trepidation will stop you.’

I firmly believe that.  I mean, my very first character in D&D, way back in 1983, was a direct rip-off from this same Red Box, Frank Mentzer’s ‘Sir Fleetwood’, who was represented by an incredible Easley ink wash illustration of the fighter class.  Does it matter to Mentzer that I appropriated his character, that I gave him a first name (Alec) and that I proceeded to create a thirteen generation family history of fully played and realized characters around that image that moved me so greatly as a boy? (See Gaming Family Tree if you don’t believe me.)  I doubt it.  If anything, I think Frank would be pleased he’d had a hand in it.  After all, as creative folk, isn’t it our job to set people’s imaginations alight so they can enjoy wherever that takes them?

In fact, to prove the point to my son, I appropriated Larry Elmore’s sample Cleric from the ‘Player’s Manual’ in the Red Box and made her my character to go along with his.  I named her Elsa Moonbright (Yes, that is a Frozen homage, so sue me!), but I didn’t stop there, oh no, I made her the sister of Aleena (now Moonbright), the beautiful young Cleric who had died at the hands of the dastardly magic-user Bargle in the intro adventure!  You see where I’m going with this right? 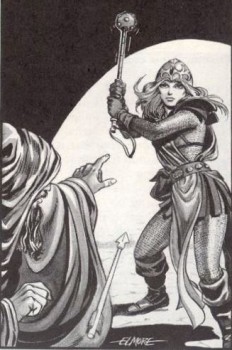 Art inspires and RPG art does more than that, it provides the perfect building blocks to use as you build a world.  Now, after seeing the images provided, my son ‘got it’, and the weight of the story, as well as his strong desire to see Bargle pay for his crime, refocused a simple dungeon crawl into something so much more.

That is the power of good artwork in this genre.  Lord knows, I’ve repurposed more than my share of it over the years, no matter what the game.  In fact, I’d say art is a strong contributor to me for going back to 1st Edition AD&D from Pathfinder/D&D 3.5, because the character sheets had such a perfect place to draw a character on them. (Or get it drawn for you as I do whenever I see an artist friend!  Watch out everyone, I’m always on the prowl!)  Once I’ve focused in on art, everything else just seems to make sense.

I wrote another article late last week on Planescape and as I wrote it, I remembered taking all my supplements for that setting to Kinkos back in the mid-90s, making copies of various art, and then making like five Tony DiTerlizzi collage pieces that I could use for the inspiration of both myself and my players as we got used to the setting.  It worked perfectly and I could readily hold up a collage whenever we encountered something relevant, the art helping me tell the story without having to dig into a book and break the action.

When a game has such inspiring artwork, it makes ‘living in it’ so much easier and once again I must say thank you to all the wonderful artists, art directors, and companies who make games that not only work mechanically, but inspire creatively.

So in closing, I hope any gamer who reads this will take a game’s art more seriously, start referring to the Keep on the Borderlands as Roslof Keep, and make up a story all your own about some piece of art you find in a game; I’m sure the designers wouldn’t mind.

I remember being genuinely sad when I read about the death of Aleena back in the original box set (I was ten). It’s good to know that her sister eventually caught up with Bargle for what was hopefully swords & sorcery justice.

Michael: You certainly aren’t the first person to be upset about Aleena, and I’m happy we could avenge her and ease your mind after all these years 🙂

We geeks just love passing the torch, don’t we?

You might find you enjoy the more narrative focussed games based on the Fate system.

Harold: You know, this is no knock on Fate, but I’ve got probably three hundred RPGs on my shelves that I’ve played very little or not at all, so I should probably play those first as my son’s adventures will likely be the last big one I’ll get to have in this life. 🙂