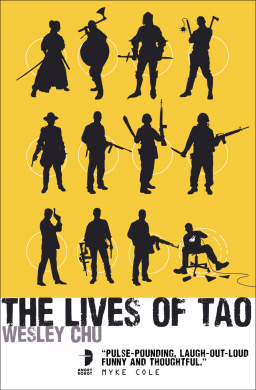 The Lives of Tao is the rare science fiction book set in modern times. No space exploration here, unless you mean the Quasing, the alien race that’s been quietly (and sometimes not so quietly) orchestrating human events since… well, since there were humans to orchestrate.

Quasing are beings so ethereal that they must live within a corporeal host to survive. Once inside a host, the Quasing can only leave if the host organism dies. In essence, Quasings are immortal as long as there is a living host nearby.

The Quasing’s main goal used to be to get humans to create interstellar travel so they could get to their home planet. Now, however, the Quasing are split into two factions (the good-guy Prophus and the bad-guy Genjix), whose main goal seems to be defeating the other. Tao is a member of the Prophus faction.

When Tao’s host dies during a mission against the Genjix, Tao needs to find a new host, pronto. Enter Roan Tan: an overweight programmer with low self-esteem who’s never run a mile, let alone held a gun, in real life. The next few months finds Tao whipping Roan into some semblance of a covert operative so they can thwart the Genjix’s secret project.

There’s plenty here to enjoy. Chu choreographs vivid action scenes, he injects humor seamlessly into dialogue, and he makes the world-building fun. Chu had all of history at his disposal, after all, and he took full advantage.

Tao name-drops previous hosts (such as Genghis Khan) and reveals he invented tai chi. Couple that with Tao’s dry sense of humor and you’ve got a character I’m willing to follow for a book or three.

I found the pacing to be a bit slow (the entire novel covers more than a year, and several times the narrative skips weeks or months), but once I accepted that Lives is an origin story rolled into a first-contact story, I didn’t mind the sometimes slow nature of the plot.

I loved Tao and found myself looking forward to his wry observations and instructions to his host Roan. Readers won’t look at World War II, the Cold War, or the Spanish Inquisition the same way again.

Kelly Swails is an author, editor, and crazy cat lady who lives in Chicago. When she’s not wrangling words or herding cats, she spends time with her husband, watches geeky TV, and knits. There’s a rumor circulating around the internet that she sleeps on occasion, but that has yet to be proven. You can find her at kellyswails.com or www.twitter.com/kellyswails.

Sounds good. The digital version is $1.99. How can you go wroing?

It’s a great story. You will enjoy it.

That Gig I was Telling You About? | All Rights Reserved

[…] doing book reviews for Black Gate. My first review is here. While I’ve done book reviews in the past, it’s been on my blog or this blog or on […]