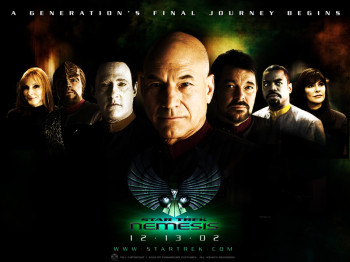 Let it be known that I missed the release of Star Trek: Nemesis because, in 2002, I was busy shepherding the next generation of science fiction fans into this wondrous, weary world. Eleven years later, I finally have the time to rectify that deficiency.

If the initial appeal of Star Trek (the TV series) was interstellar adventure coupled with wear-it-on-your-sleeve humanism, the long term attraction has proven to be much like that of visiting extended family, the kind of affable clan where reunions are always a treat.  Even if the vehicle in question is a stinker (Star Trek: The Motion Picture et al), a certain pleasure remains simply in spending a few hours in the company of trusted, far-flung friends.

Sure enough, good company is the chief pleasure of the Next Generation’s final outing. Nemesis proves to be a convoluted, shadowy film that trots out any number of sci-fi standbys (baddies in stiff vinyl costumes, fearsome ships much larger than the Enterprise, and diplomatic missions fraught with duplicity and danger), but it’s not by any means a disaster. Gone are the bright scarlet and black uniforms of old; now that the crew has aged a bit, a more somber black-and-heather-blue attire holds sway. Perhaps this is metaphorical? More than a few of our old friends do seem to be feeling the miles. Two exceptions: newlyweds Deanna Troi and Will Riker both look better than ever. Actors Mirina Sirtis and Jonathan Frakes are lucky people; age has brought out a rugged sturdiness to their familiar faces.

The plot (no real spoilers here) involves Shinzon, a renegade Romulan who turns out to be a clone of Jean-Luc Picard, and of course has it in for him, along with humanity in general. Perhaps this is a Romulan characteristic, to want to wipe out neighboring races? If so, this seems oddly racist, and antithetical to the universe according to Gene Roddenberry. Now that even the Klingons have seen the error of their fearsome ways, must the next empire over become, like Russia giving way to China in real-world politics, the next presumptive boogeyman? 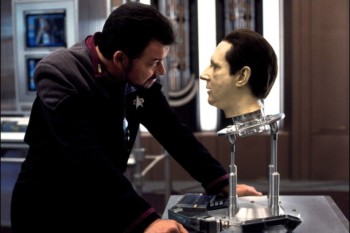 Data (Brent Spiner) gets the best bits of business. (No surprise: he had a hand in the script.)  Spiner is double-cast as a primitive, adolescent version of himself named B4. As his own prototype, he’s a fish out of water, and Spiner has great fun alternating from the double’s shifty cadence to his Data’s famously neutral delivery. It should come as no surprise that Data’s and B4’s relationship mirrors that of Shinzon and Picard. In a distant Biblical echo, it seems that even hopeful Star Trek feels that not all “brothers” are to be trusted.

The film looks good – great lighting, solid effects, pacey directing – but somehow Nemesis never quite takes off. The Star Trek franchise has always had limited success leaping boldly into any format longer than the fifty minutes required of episodic television, and the films that have fared best (Star Trek II and IV) relied on straightforward scenarios to generate their effects. Perhaps this should be obvious, but in a clean, uncluttered drama, our old pals have the most space (pun intended) in which to take the stock characters we love so much and give them room to play off each other. Consider the plot of Star Trek IV, in which a potent alien will destroy Earth unless it can talk to whales, but, since no whales are available, Kirk and Company must provide appropriate cetaceans forthwith. Hijinks ensue, as do satisfied audiences.

Nemesis gives room for the requisite hijinks, but the whole thing feels busy, in part because, for the longest time, it’s not clear what’s 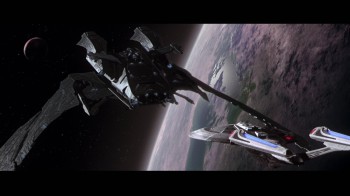 going on, or whether Picard should or should not trust his Romulan “brother.” Mystery is all very well and good, but in the milieu of Star Trek, it intrudes.  What we want from the Trek is a clear problem, a moral wrong which our intrepid heroes can and will overcome. Mystery muddies the nebulae.

On the plus side, there’s a lot of gorgeous phaser fire, a spectacular collision, battles in dark hallways, and – wait, let’s talk about dark hallways. Why is the enemy ship so dim? Do advanced non-human races prefer nocturnal lighting? Or is it because (gasp) the filmmakers are signaling to viewers that those folks in the dimly lit ship are bad guys? Right: only bad guys pilot technologically astounding ships in near-total blackness. Yeah. That must be it.

How come nobody has pockets, still? And where are the freaking seatbelts??? Personally, I wouldn’t set foot on any iteration of a Federation ship without body armor and a crash helmet. If we watch the Trek canon from the perspective of driver’s education, their track record is, let’s face it, abysmal. 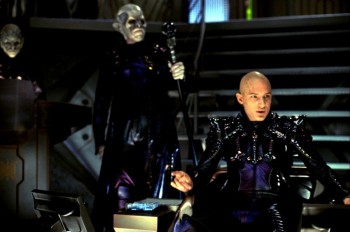 Another peeve: with the notable exception of Worf, the deeper the voice, the more likely the speaker is to be a villain. For once, I’d like the Enterprise to go up against a really dangerous antagonist that talks like Squeaky Fromme or Elmer Fudd.

One problem for franchise films is how to deal with the relatively low stakes. If this were a one-off such as Event Horizon or Outland, we could reasonably assume that anybody’s life might be forfeit, including newlyweds Troi and Riker. With Star Trek, that’s a difficult sell. To its credit, Nemesis finds a last-minute way to tear at the heartstrings, and (better still) to repair the void that’s left. I won’t reveal the trick, never fear, but while ninety percent of Nemesis adds up to little more than a diversion – and this despite a game try at elevating the old nature vs. nurture debate – it’s safe to say that Nemesis has a final card to play, and it’s a very affecting ace.

Meanwhile, it’s joke night in the lounge on Deck Seven. Hey, computer: have you heard what a Romulan frog uses for camouflage?

And what about this? What did Worf say when small ice asteroids began hitting the hull?

“Captain, we are being hailed.”

For those jokes and more, I credit Jokes 4 Us dot com.  Sorry.