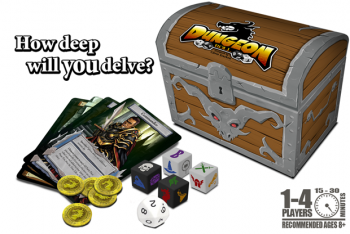 For the basic $15 buy-in, here’s everything that you get (as of this moment):

A favorite game around our house is TMG’s quick-to-learn dice game Martian Dice (Amazon), which is so accessible that we’ve even taken it to church picnics for an activity – to great success, I might add. Despite the fact that a game with undead is probably not appropriate for a church picnic (at least according to my wife), I’m definitely looking forward to Dungeon Roll as a way of getting my son more into fantasy gaming and dungeon crawls.

I’ve backed a couple of TMG’s Kickstarters. Their tile-based game For the Win (Amazon) was a small-scale game that was delivered quickly and on time, as opposed to their board game Kings of Air and Steam, which took a long time to get fully produced and reach backers. Dungeon Roll seems like a much less ambitious project, though, so I have little doubt of their ability to deliver the game in a timely fashion.

Disclaimer: I’ve already backed the game, so this review is admittedly very self-serving, as I’d like to get as many stretch goals as possible.