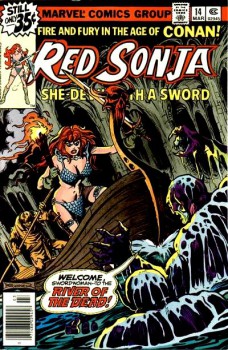 So this issue begins with Red Sonja walking through an unnamed town at night, minding her own business. Not sure how small the town is or how late, but on page one, we see only one other person on the street and he’s sleeping on it. I’ve probably mentioned before in these reviews that I find the preponderance of unnamed towns and unnamed demons to be a bit annoying, especially coming from Roy Thomas, who’s fairly knowledgeable about all things Hyborian. Seriously, just make up a name for the town or use a real city name. No one’s going to check.

Watch. Evanston. Red Sonja’s walking through Evanston, trying to forget her beloved Suumaro (the mommy-fixated boy-king who treated his wives like slaves and wanted Sonja to join his harem – what a catch). Now let’s move along.

So Red Sonja is just minding her own business, which is pretty much all the invitation anyone seems to need to bother her. She’s approached by a glowing nobleman named Gonzallo (see, no one cares that it’s a stupid name), who offers to pay her a diamond if she’ll act as his bodyguard for a few hours. When she asks why he’s glowing, he dismisses the question by saying that he’s eccentric.

The diamond looks real, so Red Sonja lets herself be hired. The first thing Gonzallo does is guide her to his gondola (oh, so they’re in Venice) and his requisite deformed gondolier, Karon. As the three of them make their way through the canals of (Venice? Evanston? Lower Aquilonia?), Sonja notices the surroundings have begun to change and soon they’re moving through an underground canal. The chamber is lit faintly by phosphorus, just enough for Sonja to see an iron gate rising up out of the water to block the way they’d come.

It’s also just bright enough for her to see that the canal is now filled with zombie fish men. And if you think zombie fish men are the weirdest thing Red Sonja will encounter this issue, then welcome to the Red Sonja reviews, this must be your first time here. So the gondola finally settles on the shoreline beside a glowing underground castle (why not?). And the zombie fish men begin leaping from the surrounding cliffs into the water. Does that make them zombie toad men?

At this point, Gonzallo totally gives away the game, screaming to the toad men that he’s brought Red Sonja here to replace him and that they should claim her soul instead. Turns out, the nobleman died earlier that day, but was revived by a holy man who managed to keep him alive for an extra day, which is apparently why he’s glowing. So the spell will wear off in a day’s time, unless Gonzalo can sacrifice someone in his place. In one of the more ludicrous gestures to grace this title, he tosses Red Sonja a sack of diamonds in payment for letting him sacrifice her to the toad men.

Red Sonja’s response? “What good will they do me in the land of spirits?” But she takes the sack because, really, how often does she actually get paid for a gig?

So the toad men quickly overpower her and drag her off to the glowing castle. There she is to be married off to the death-god. Which leaves me to wonder, if Gonzallo hadn’t found a suitable sacrifice to replace him, would he have ended up the bride of the death-god?

And, again, the death-god goes unnamed. Honestly. How can Sonja possibly keep track of all the demons and death gods she’s encountered if half of them are never named. I’ll call this death-god Curly.

And it’s the zombie toad women who are preparing the marriage bed of the death god Curly. Apparently, toad men gather the brides and toad women keep the castle clean. When Red Sonja is dragged into the unholy bridal suite …

This is my twenty-fourth Red Sonja review. I’ve read through her encounters with nine-armed demon charioteers and two-headed dragons and green robots and spider gladiators and bee people and peacock-blowing centaurs. I’ve followed her through a lot of crazy stuff.

The zombie toad people are going to feed Red Sonja to a giant clam.

And after a page of struggling, she gets tossed in. The clam snaps shut and our She-Devil with a Sword is left to be slowly digested. The toad people have taken away her weapons and the clam’s shell is too thick and strong for her to break through.

Sonja’s lost feeling in her legs when she realizes that they’ve left her Gonzallo’s reward: a sack of diamonds. She quickly pulls one out and starts carving into the soft innards of the beast. There’s a fairly bloody page of clam violence before the thing finally bursts open and Red Sonja leaps out (say, didn’t her legs go numb two pages earlier – forget it). She tosses the remainder of the diamonds at the zombie toad men, apparently hoping to hurt them. Instead, they descend on the scattered diamonds, fighting each other to get their hands on the treasure, which is as good a way to incapacitate them as anything else.

Sonja knocks around a few of the toad women, reclaims her sword, then catches up with Karon. Gonzallo is gone, having apparently made his way back to the surface while Sonja was fighting a giant clam. And Karon returned because … why? In case one of the zombie toad men wanted to visit the city? It really makes no sense, but once again, Red Sonja eats plot holes for breakfast. She knocks the evil gondolier (two words I never thought I’d put together before I started reviewing this series) into the water. And the toad men claim him as payment for Gonzallo’s soul.

So I guess they’ll wait until their clam death-god has recovered and then feed Karon to it.

Sonja guides the boat back to civilization. It doesn’t take long before she finds a now non-glowing Gonzallo, still wandering around town in the dead of night. There’s a (very) brief exchange and then he’s dead. After the extended Suumaro love story, this issue is a welcome return to gonzo sword and sorcery insanity.

The only thing that would have made it better (besides a few more names) would have been the return of Frank Thorne, but he’s gone from the series, never to return. John Buscema is replaced this issue by his brother Sal. And I may be in the minority camp of comic fans in saying that I tend to prefer Sal’s work. Of course, both of them are great artists and their work is the sort of thing beginning comic artists study; but there’s just something in the way Sal draws faces. I look at his version of Red Sonja and see a woman who’s just a little too crazy to ever settle down.

Next Issue: How weird can vampires get? Oh, that sounds like a challenge.