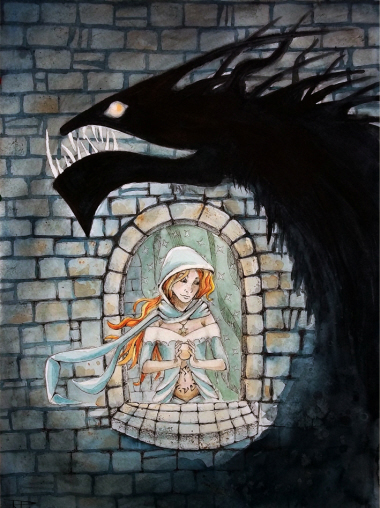 Pink dawn was on the mountains when Naome saw the first of the flying creatures. It paid her no notice, but flew on with speed along the curve of the coastline, toward Jadh.

Suddenly the sky was filled with the thump of fell wings. The grotesque creatures were some sort of winged baboon, but not like any seen on Earth. Each was as large as a horse, and great ram horns curled down from the crown of their massive foreheads. Savage yellow fangs overhung the jaws of these demons. The baboons flew with stupid purpose, ignoring one another and Naome’s boat as they rushed toward Jadh.

It was the most terrifying vision Naome had ever beheld. Nausea overcame her as she wondered if these hellspawn were searching for her. Thousands of baboon demons croaked overhead and Naome began to sense her doom, and that of Jadh, which she knew lay at the end of their mindless journey.

The last of the croaking horrors disappeared into the south. She trembled and wept, and then reversed course, paddling hard. She knew she would be late, far too late to give warning to her father and sisters. A demon host was coming to Jadh, and it was her fault entirely.

“A Princess of Jadh” is a complete 13,000-word swords & sorcery novelette offered at no cost, with original art by Rachel Patterson.