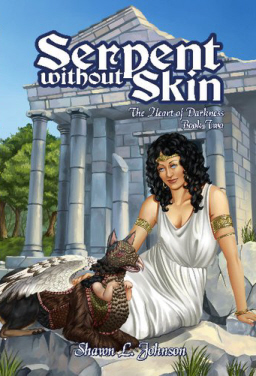 When I resolved to publish the two novels in my Heart of Darkness series as eBooks, I figured I was all set. The books had already been edited and re-edited; I had the future plotlines mapped out in my head. That was everything, right?

Of course not. My wife — aka “Queen of Internet Research” — cautioned me, “Everything I’ve read says you need a great cover that really catches the eye.”

I hadn’t thought that far ahead. I’d always dreamed of being picked up by a major publishing house that had its own artists.

I mean, I like fantasy art as much as anyone, but I’m good with words, not pictures. I had no idea how to locate a good cover artist.

So I asked a friend of mine who is an artist to do it. He begged off, citing his current, non-artistic workload. Nor did any other personal connections pan out.

Ahead of me yet again, my wife told me about several options she’d read about on the internet. The most interesting was a contest where artists compete for the prize of being your cover artist. You are presented with several custom options and only pay if you accept one.

An intriguing concept, but I wanted to know more about my prospective artists. So my friend recommended deviantart.com. There, my wife and I posted a job description and waited, though not for long.

The first reply arrived within half an hour. It was a couple of guys who did freelance art as a team. Their samples looked pretty good, so we emailed them about prices and terms, etc.

Strangely, they never responded. Eager to apply for a job, but no follow up. Hmm…

Not to worry. More replies came in steadily, several a day. The majority of the offerings were anime. I love anime, don’t get me wrong, but it doesn’t suit the tone I wanted.

The range of the applicants’ ability varied across the full length of the spectrum, as did the their nationalities. Some were teenagers accustomed to drawing derivative anime or action comics, while at least one had done professional illustrations for major publishing houses. We queried him, just to see — he wanted $1,000 per cover, and I needed two! Yikes.

Besides the price (which was certainly reason enough), his samples — though excellently executed — looked like most of the cover artwork I’d seen in the past decade. I wanted something different, something that stood out.

We eventually narrowed our choices down to three. Interestingly, not one hailed from the United States.

One was a Scandinavian man whose name I unfortunately cannot recall. His art was strong with an almost photographic realism. Norse gods and heroes were his favorite subjects. Though mythology permeates my novels, it derives more from an ancient Greek inspiration. Also, since my two primary antagonists were female, I wanted a feminine touch for both covers.

Which left two very different ladies from two distant countries. According to her bio, “DeftlyHeartless” is a Filipina digital artist that works for a videogame company. Her vivid style and graceful rendering of the feminine form reminds me of the newer Final Fantasy series.

One of her samples, “Paint” shows an exotic woman (possibly the artist herself) painting with magical effects on a canvas. After much consideration, I decided her style looked too contemporary for my theme.

Saarl’s women looked… well, like women. I could see classical influences in her work, especially in my favorite, a piece called “Not as Innocent,” which looked both sinister and timeless. And timeless was what I was shooting for.

Next up: collaborating with my chosen artist…

Wow, nice art. 🙂 Hope you find what you are looking for. Hm, you know as part of Michelle West/Sagara (I’m reading her Elantra Chronicles) group I think I saw a similar discussion about cover art, the ones portrayed on her book series, and never realized it was such a big deal. Then again, I just usually read the synop to see if the story catches my attention. If it does, I read it just out of sheer curiousity, cover or not. As a reader, if I went purely by art, there would have been a lot of ebooks I’d not pick up. *lol*

Of course if it’s an author whose work I’ve read before and was hooked, I don’t even read the synop, I just go for the story. 😛

Another place you can source cover artists is conceptart.org. They have a section specifically for such requests, and it’s a very busy forum.

I was lucky enough to work with Julie Dillon and Simon Dominic after putting a request up on conceptart.org – I had over 100 responses in a day. I was willing to pay well, since I really wanted covers I would love.

Here’s one of my upcoming covers, done by Julie. I’m tremendously pleased by it:

[…] second book in the series, Serpent Without Skin, was released early last year. But now you can get in on the ground floor on a dynamic new fantasy […]

[…] He wrote about them recently in two articles on the Black Gate blog: The Road to The Heart of Darkness, on editing and publishing both books, and a piece on Finding the Right Cover Artist for your eBook. […]