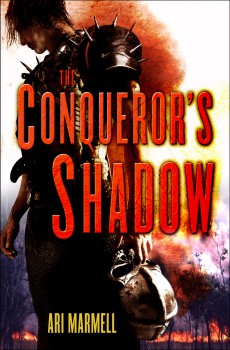 The Conqueror’s Shadow is Ari Marmell’s first wholly original novel. Though published three times before under the Dungeons & Dragons trademark (Agents of Artifice, Gehenna: The Final Night), this is the first fiction Marmell has produced without a shared world. What results is a mix of epic fantasy and sword and sorcery tropes slanted slightly, ringed around with humor, peopled with not-good but not-really-evil characters, with a setting that Marmell says, “drew on all the traditional sources of fantasy. There is some historical Western Europe, some D&D, a sprinkling of Eddings and Feist.” The end result is a fast-paced epic adventure bursting with riotous humor and likable characters.

Oddly, the story begins at its ending, or at least seemingly so. Corvis Rebaine, the Terror of the East, has conquered Denathere, a key city in the Impahallion Empire. But Rebaine makes a tactical error, and he won’t be able to hold the city against the combined might of the empire’s armies and the private armies of the Guilds. So Corvis flees, taking along as hostage the young noblewoman Tyannon, leaving his own armies to be defeated. Skip forward seventeen years, and Rebaine has settled down into the life of farmer with his wife Tyannon. All is well, until Rebaine’s two young children are threatened by the roving marauders of a new warlord, Audriss, who follows the exact same battle plan Rebaine once devised. The now middle-aged ex-warlord gathers old compatriots from his glory days to end the threat to his new life, family, and the very empire he once tried to destroy.

The Conqueror’s Shadow has no heroes, but nor does it have any true villains. Both Rebaine and Audriss are men who act as they do for what they see as a righteous reason, a perceived imbalance that can only be fixed through revolution. Both choose to use fear and torture as methods to achieve their aims. Even when Rebaine leaves off being the supposed villain of the tale and becomes the hero, he does not give up pragmatism. Neither he nor Audriss can be casually labeled good or evil characters. Each acts as they do from both righteous and selfish motives whose very unpredictability makes them compelling. For instance, Rebaine’s cowardly departure from the field of battle is not something a hero would ever do, yet Rebaine does it, and is in never stricken by a crisis of conscience because of his abandonment.

The book’s minor characters, especially Rebaine’s former and current compatriots, illustrate this shading of moral fiber. Khanda is a sentient magical amulet whose hatred of Rebaine knows no bounds, but will assist Rebaine by boosting his magical abilities. Davro the cyclopean ogre is a former warrior turned farmer whom Rebaine must coax into assisting him in his war against Audriss. Sellioah is a cannibal witch whose magic is primarily used for healing, ironically. Only Valescienn, the longtime soldier, seems to become more evil with time, but only because his selfish motives never lead him into a noble act. Marmell’s tale leans neither toward the straight heroic fantasy of David Eddings or Raymond Feist, nor toward that of the antiheroic tales of Joe Abercrombie or Glen Cook, but finds a unique and utterly fascinating middle ground.

The narrative’s structure is helpful with this as well. Save for the prologue and chapter one, each of the twenty-eight chapters begins with a flashback to the time when Rebaine was a conqueror rather than a savior. Not all are from Rebaine’s perspective, but each illuminates some facet of the character’s complex personality.

Perhaps the best part of the story is Marmell’s extensive use of humor in the tale. Marmell has a witty pen, and where many authors tend to be one-note humorists, relying solely on puns or sarcasm or dark comedy or slapstick, Marmell has a broad-spectrum of humor, using the each branch of humor effectively. Davro pulls a prank on Rebaine when he forces him to wear his heavy armor while riding through a hot swamp. Audriss plays with puns when one of his minions, a vampiric spirit, flows under a locked door in a blood pool and Audriss exclaims “bloody door.” Every exchange between Rebaine and Khanda is laden with sarcasm. And there are other examples, none of which are restricted to one character or situation type. This levity makes The Conqueror’s Shadow as amusing as David Eddings or Brent Weeks, while still being more akin to Scott Lynch or K. J. Parker in tone and theme.

Thematically, Marmell covers a lot of territory for a novel that is packed full of action sequences. Marmell looks at notions of love, family, loyalty, governmental structure, political dissent, and the fine line between hero and villain. It is not a really deep novel, preferring entertainment over philosophy, but it contains some provincial proverbs and thought-provoking events.

The Conqueror’s Shadow is a narrative that has flown under the radar of critics, and yet is one of the more original while also safely familiar epic fantasies published in recent years. Gemmell fans will likely lap this up, Eddings devotees will find much of their favorite author, Dungeons and Dragons novel readers will find a comfortable sword and sorcery writing style, and those looking for something “new” in epic fantasy may find that Marmell has scripted a work that mixes and matches the humor and grand scope of 90’s epic fantasy with the ethically gray, antihero-driven, new millennial sword and sorcery. It is one of the finest novels I have read this year.

John Ottinger’s reviews, interviews and articles have appeared in numerous publications, including *Publishers Weekly*, *Black Gate*, *Strange Horizons *, *Electric Velocipede*, *SF Signal*, *Sacramento Book Review*, and * Tor.com*. He can be found pontificating regularly on nothing much at Grasping For the Wind.

[…] review from Black Gate #15 of Ari Marmell’s awesome The Conqueror’s Shadow can now be found at the Black Gate blog. If you didn’t get to read the magazine, now’s your chance to read the review […]

[…] Cold Iron (2014), and The Conqueror’s Shadow (2010), which John Ottinger III reviewed for us here. Perhaps his most successful series has been his YA novels featuring the thief Widdershins, […]