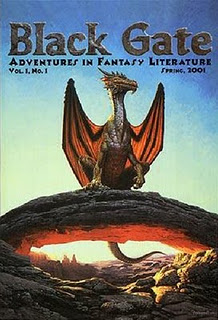 Jeffrey Ford’s short story “Exo-Skeleton Town” grabbed a lot of critical attention when it appeared in our first issue in Spring, 2001. Antony Mann, in issue 2 of The Fix: The Review of Short Fiction said:

Jeffrey Ford’s “Exo-Skeleton Town” is a ribald, scatological tale set on a dark planet populated by alien bugs whose medium of exchange is their own excrement in the form of dung balls. Humans have arrived in force, having learned 1) of the bugs passionate interest in old back & white movies; and 2) of the dung balls’ fantastic aphrodisiac powers. But wait, there’s more… lots of wacky fun. There are some thematic ironies that knit together the story’s various parts… it’s definitely alive.

If you’re not already a fan of the old, classic Hollywood movies — and the actors and actresses that made these films such classics — then you certainly will be after you’ve read “Exo-Skeleton Town.” This is probably the quirkiest story in the anthology. And it remains one of the more unique story concepts I’ve ever read. In fact, even though I’m the editor, I’m almost tempted to ask Jeff: “Where the hell did this idea come from?”…

So, for your reading pleasure, here is “Exo-Skeleton Town,” which won the 2006 Grand Prix de l’Imaginaire, the French national speculative fiction award.

You can enjoy the complete story, one of the most unusual and imaginative pieces we’ve ever published, at Marty’s blog, More Red Ink. And you can see the complete Table of Contents for Black Gate 1 — still available in our store for just $18.95 — here.

I think this story was my intro to Jeffrey Ford — hands down one of the best short fiction writers working today.

Great story from a great writer.

Websites You Should Visit…

[…]very few websites that happen to be detailed below, from our point of view are undoubtedly well worth checking out[…]…

[…] author of the weird and wild story “Exo-Skeleton Town” in Black Gate 1 (read the complete text here), has a great selection of novels available available at steep discounts this week, including The […]

[…] can read the complete story here. We published Ellen Klages wonderful fantasy “A Taste of Summer” in Black Gate 3; she has since […]