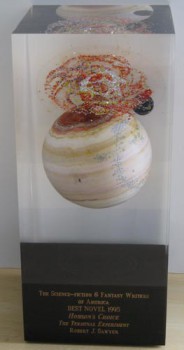 The Nebula Awards for the best science fiction and fantasy published in 2010 were awarded by the Science Fiction Writers of America in a gala celebration yesterday, part of the Nebula Awards Weekend.

The Nebulas have been awarded every year since 1965. This year’s presentation was at the Washington Hilton in Washington D.C. It was especially poignant for Black Gate, since our own Amal El-Mohtar was nominated for her short story ‘‘The Green Book’’ (in the November issues of Apex magazine).

And the winners were:

The Ray Bradbury Award for Best Dramatic Production went to Inception, and the Andre Norton Award for Young Adult Science Fiction and Fantasy was won by I Shall Wear Midnight, by Terry Pratchett (Gollancz; Harper).

The Solstice Award for impact on the field of science fiction and fantasy was given to both Alice Sheldon (James Tiptree, Jr), and the artist Michael Whelan. The SFWA Service Award went to John E. Johnston III. Complete details on the awards can be found at Locus Online.

Congratulations to all the winners! And to Amal, both for being nominated, and for being so damn cool.

Two of those five are in my writers group. You should hear the cheering in our forums. 🙂

I went on a Kij Johnson binge over the weekend and read, not only “Ponies” (which was very Shirley Jacksonian, I thought) but “26 monkeys” (AMAZING!!! I liked it even BETTER than Ponies!) and “Spar” (which was quite gross and amusing).

I am so proud of our Amal and excited to see her at WisCon. We must WINE AND DINE HER! And hug her and squish her and coodle her, of course.

I mean, I don’t think “Spar” was SUPPOSED to be amusing, but it was so, so… VISCOUS!

Jeff – wow! That’s quite a writer’s group. Are you open for members? 🙂

Claire: 10-4 on the full-press red carpet treatment for Amal at Wiscon. You handle the hugging; I’ve got the coddling covered.

Maybe we should read some short stories for our summer reading group? We should make a list. “20 Monkeys” should definitely be on it!