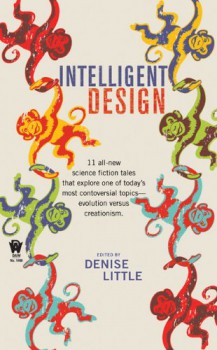 Intelligent Design collects eleven stories focused on the theme of the creation of life. I honestly didn’t know what to expect, but I was impressed by the stories presented. This is a thinking person’s collection, an idea-driven romp through one of the most contentious topics in modern society.

One of my favorites was the final story, Laura Resnick’s engaging creation retelling “Project: Creation,” which actually made me laugh out loud. It reminded me of a mix between the Book of Genesis and The Office. What impressed me most was that it seemed like it could be read and appreciated by people on both sides of the debate. It leaves the basic tenets of creationism and religion intact, while providing a context where those who are less mystical can still appreciate the story. Each side could think, if only for a moment, “Yeah, maybe it could have sort of happened like that,” and at least see a glimpse of the other side’s point of view.

Overall, that was the best part of all of the stories – virtually none of them came definitively down on one side or the other. Atheists and creationists could read this book and have an actual discussion about it, without having to throw the idea of common ground out the window. “God, No Matter How You Spell It” by Brendan Dubois, Jean Rabe’s “Int Des 101,” and Michael Hiebert’s “The Signature of God” present nature as the ultimate engineer, and show how nature’s designs can be utilized toward potent technologies, both benign and malignant, regardless of their original source.

Still others (“Made Manifest” by Jody Lynn Nye, “He Created Them” by Sarah A. Hoyt, and “The Final Report on the Eden Project” by Bill McCay) explore, in ways both scientific and religious, the forms of life that could come after humanity’s passing. Some of the stories treat all of creation as the domain of supernatural beings who play games with our very existence (“The Vaunting” by Janny Wurts and “Luck Be a Lady” by Dean Wesley Smith).

Perhaps most profound are the ones that have no real speculative elements (in the “speculative fiction” sense, at least), but could instead take place here and now to someone the reader knows. Kristine Kathryn Rusch’s “The Year of the Rat” and Peter Orulliam’s “Guilt by Association” fall in this category. The whole collection focuses on the inherent need of human beings to seek out a meaning in our existence, but the Rusch and Orulliam tales confront this most head on, and these stories illustrate those themes best of all.

For those who enjoy discussing the philosophical concepts that arise in the cracks where neither science nor religion can firmly hold ground, this collection is great. It provides a wonderful discussion point between the two extremes, if it is possible to find people on those extremes who want to open a dialogue. Perhaps this book will be one way of trying to open one. It certainly won’t answer any of the great questions of the universe but, if nothing else, it is an engaging read along the way to wherever we finally end up.