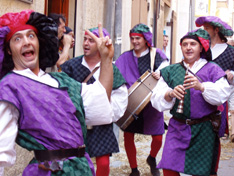 Nearly a decade ago, having spent four nights reading my story “A New Grave For Monique” aloud to a late-night workshop audience, I won an award for fiction from the Santa Barbara Writer’s Conference.  The audience (and the conference in general) was uniformly Caucasian.

About a year later, I showed the story to my friend Ellie, who immediately noted that when I introduced the Haitian character, Monique, I stated in the text that she was black.  Not a foul in and of itself, except that I did not introduce any of the story’s many white characters as white, a fact Ellie was quick to note.  Had I read “A New Grave For Monique,” since published in Traps (Darkhart Press, Scott T. Goudsward, Editor), at a conference of African-American or multi-national writers, I suspect I would have won little more than a pie in the face.  And deservedly so.

We in the business of writing (and reading) speculative fiction and adventure fantasy should be especially sensitive to this issue, as the stories, the settings, and the readership remain predominantly white –– Nordic, even.  Conversant we may be with Greek or Aztec or Navajo mythology, but the wellspring from which most adventure fantasy draws its nectar is indisputably Northern Europe, and the many exceptions only prove the rule.  That this should still be the case in our globe-trotting, air-travel era ought to be a wee bit alarming. 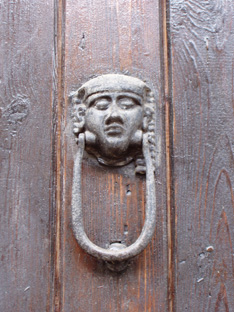 If we reduce all this to pure technique, the issue of introducing a character’s race in prose is solvable simply by not settling for easy, untrue descriptors.  Toni Morrison (among others) eschews “black” and “white” entirely, as well she might, and relies instead on vivid and specific skin tone comparisons, suggesting that one character has skin like a polished walnut table, another like old coffee, a third like pinkish chick peas and so on.  (None of these are examples culled directly from Morrison––or if they are, it’s only happy accident.)  Color, after all, at least in the realm of skin tone, is only a case of black and white when one is watching re-runs of Star Trek’s “Let That Be Your Last Battlefield.”

Post-Ellie, I have generally taken Morrison’s tack, and I’m well pleased with the results.  I will be employing it again any day now, as I introduce a new character into my shortly-to-be-completed novel, The Portal.  The character in question, Hehshear, is decidedly “black,” although in literal terms, he is no more black than a street-lit city by night.  (If you really want to see black, go caving, then turn out the lights.)  The exact phrase I’ll turn has not yet occurred to me (“…he stood there dripping in the rain, his skin the color of overripe avocados…”) but it certainly won’t involve the adjective “black.”

And I don’t think I’ll be using that absurd avocado line, either. 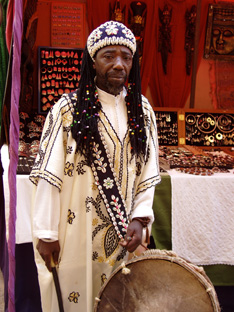 Let’s face it: From Tolkien to Moorcock to Leiber to [fill in your favorite adventure author here], the rule of thumb is pale-skinned heroes and heroines, the kind you might bump into in Ireland, Russia, or Hungary.  And now we have Twilight, with much the same result.  When these characters run into people from warmer Southern climes (think Tolkien again), they tend to be dangerous and unpredictable Saracen types with desert ways and darker but not truly dark skin –– not like, say, the people of sub-Saharan Africa or southern India.

So where was I?  Oh, yes.  At the tail end of The Portal, my book’s heroes, who range in skin tone from ecru pale to sun-burnt bronze to camouflage green, will encounter Heshear the Poet, accomplished scholar and diplomat, an aging patriarch of wisdom, learning, and (sometimes) narrow-mindedness.  How will he interface with the rest of the book’s characters?  Well, he will certainly not be running through jungles waving a spear and trying to chuck Tarzan in a cook-pot.  Nor will he be a shifty-eyed thief lurking in some Casablanca-style doorway.  Rather, he will be cultured, helpful, and firm, self-motivated and unpredictable.  He will, in short, be a full-blooded human being.

Unfortunately, Hehshear will also function as a watermark by which to judge this author’s racial sensitivity.  There’s really no way around this.  It’s the inheritance of the world I’ve been born into, a world where I come crowned with a certain kind of privilege, that of the white male.  It’s my task –– my fortunate task, really –– to swim these currents as best I may (and without complaint). 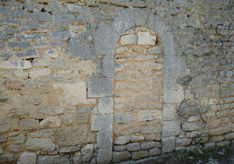 We do have exponents within the genre who are tackling all this, some intentionally, some by simple happenstance.  (Heck, even Conan the Barbarian was a “Cimmerian.”)  Howard Andrew Jones, as many BG readers surely know by now, is mere moments away from unleashing his first Dabir and Asim novel on the world.  At least one recent editor of my work, D.L. Russell of Strange, Weird & Wonderful, is African-American –– but he’s the only one I can think of, at least in the SpecFic department.  Surely there are others –– two or three –– disguised by the impersonal veil of the internet?

The underlying tropes of fantasy and science fiction are not, in the main, suspect.  That is to say, the genre is capable of more inclusion than exclusion.  The trick is to generate work that honors that spirit of inclusion, that opens rather than shutters our fictional possibilities (and our real-world lives).  Sure, we can settle for Elves, Dwarves and Orcs –– no difficulties with racial description there –– but we beggar our available themes if that is all we attempt to write or read. If world-building (or world-reading) is our work, imagine what might happen if we started avoiding Northern Europe as our default starting point.  Just think: What if Umslopogaas had come to England in search of Allan Quatermain instead of the other way around? 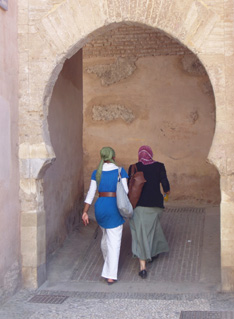 Hmm.  That actually sounds suspiciously good.  Maybe I should go write that.  I could call it Queen Victoria’s Mines.

On second thought, I think I’d better finish off The Portal, instead.

Nope.  Back, as they say, to the drawing board.

Mark Rigney is the author of Deaf Side Story: Deaf Sharks, Hearing Jets, and a Classic American Musical (Gallaudet University Press), as well as the play Acts Of God (Playscripts, Inc.).  Upcoming short stories will appear in Black Gate, Realms Of Fantasy, Sleet, and Day Terrors, among others.  His website is www.markrigney.net and he lives near most of the many-hued and wonderful people depicted here.

Not sure how related this is, but I used to adore the show Gargoyles. And, on reflection, one of the things I find notable about it is its inclusion of different races of people (Elisa Maza, half-african american, half-native american with a Spanish last name; Morgan, an african-american cop, who was really a secondary character to be honest). One of the strengths of this is it showed that, despite coming from different racial baackgrounds, they all seemed so normal. You didn’t notice their race. Compared to the gargoyles, you had no choice but to see these minority characters just as what they are, normal American human beings. Even in later episodes, when they began to find clans all over the world (Guatemala, Japan, England), you found differences, too, among the different clans. The flux of different culutres were incorpated into the show without making it feel…alien. The whole show was alien, and you just flowed with it. I think what the writers did on that show was light-years ahead of what traditional fantasy is doing.
On a different note, and I think you might have touched on this (or I’m just rying to say you did so I can write my thoughts on the subject :p), there’s certainly a danger in incorporating different races into a Euro-centric genre. How do you fantasize contemporary hispanic culture? Does a name like Mendez fit within the genre with other names Bilbo or Fafner. It seems urban fantasy is best-suited to incorporate different races. Or, like Charles Saunders did, maybe a whole new world is necessary. But then the question is: who’s interested besides a handful of enthusiasts who want to see diversity in the genre? Sales matter. It’s been tried. And who cared? People like Samurais more than Naguales.
I remember when I was young, and surfing the fantasy isle at B&N, I wanted to find at least one hispanic writer, or at least a hispanic fantasy of some sort (since, you know, I’m hispanic :p). I found none. There’s one now that I know of: A Lee Martinez. Other than that, I don’t know of any.
The other trap is what are minorities expected to write? I was at a writer’s conference listening to a publicist emphasize that the industry wants hispanic writers. Great, I thought. I’m a shoe in 😉 I asked if hispanics were gonna have to write about hispanic things. She hesitated, tossed the question around in her mind and finally admited: “Probably so.” Sure, it’s one opinion.
But who else can write it authentically? Who can capture the madness of hispanic life within a fantasy setting (urban or traditional) besides someone who grew up within it? I’m gonna sound terrible for saying this, and I’m not trying to be, but most potrayals of minorities by caucasian folks comes off as not real. There’s much more to a hispanic character than a spanish last name and the fact that he or she eats tacos (I’m looking at you Blue Beetle, but I really do appreciat the effort) a bit more than his caucasian counterparts.
It’s a tough battle for me wanting to write about hispanics within the genre. I write what I know and grew up with. I love digging into my meso-american heritage and shaping things to fit my tastes. And I’ve been criticized that my characters aren’t hispanic enough…… o.O

You surely have read, but on the off-chance you have not, read The Brief Wondrous Life of Oscar Wao (2007) by second generation Dominican American writer, Junot Díaz. It’s hispanics, nerd culture, sf/f, games, the tragic horrid history of the DR, as told in the voices of young latinos growing up in New Jersey.

There are many reasons it won the Pulitzer for literature that year. But most of all, it’s a novel thrilling to read.

Gabe – What a pity that publicist you encountered would insist on a hispanic author writing only on hispanic topics. While not a bad idea (let the experts have their due in any given field), it’s such a limiting perspective. It’s the job of fiction writers to put themselves in the shoes of any character they require to make their story tick. The best can pull it off, no matter what culture they hail from themselves. As for “Gargoyles,” I’ll have to check that out. One of many shows I’ve missed!