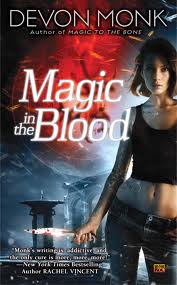 Urban fantasy walks a fine line between engaging the reader with magic that feels real, while operating in a gritty modern setting that seems as far from magical as possible. Devon Monk’s series (starting with Magic to the Bone) is set in gray, yet somehow inviting, Portland, Oregon, offering many repurposed old buildings, and lots of colorful characters in addition to the incessant rain.

Our heroine, Allie Beckstrom, is a Hound, a magically gifted person who can sniff out the caster of any spell: really sniff, that is. Hounding can be a good way to make a living, but magic has its price since “using magic means it uses you back.” Cast a spell without deflecting the painful backwash means aches, pains, exhaustion, and worse, depending on the strength of the spell. There are rules. Legally, spells can only be cast on a person with their consent. And “Offloading” the bad side effects of magic onto another is strictly forbidden.

Magic in the Blood opens with Allie recovering from the dire events of her previous case. Hired by the police to Hound an “Offload” spell which hurt a young boy, Allie traces the illegal spell back to none other than her estranged dad, cold-hearted Daniel Beckstrom, head of Beckstrom Enterprises. Framed for her dad’s murder, Allie finds herself teamed up with the Zayvion Jones, a mysterious corporate operative, to find the murderer. Forced to use all her magic to save Zayvion and defeat the bad guys, Allie ends up in a three week long coma and loses her memory of nearly everything that happened – including her budding romance with Zayvion.

Now back home in her small barren Portland apartment, Allie is trying to put her life – at least, what she remembers of it – back together. A bizarre encounter in her own bathroom with her father’s ghost, who tells her to “Seek,” doesn’t clarify anything except the fact that there is still some business left undone – business Allie would rather not be any part of.

The situation worsens when Allie finds herself being coerced into working for mobster Lon Trager, a crime lord she helped put in jail. Now that Trager is out (he got his court case declared a mistrial), he is looking for revenge. Whatever he has in mind for Allie, it won’t be good.

But a Hound has got to pay her bills, so Allie agrees to a Hounding job with Portland police detective Paul Stotts, head of the city’s Magical Enforcement Response Corps, sort of like SWAT for magical crimes (forget the fact that sixteen Hounds have died in the past six years while working for Stotts.) Stotts is investigating some mysterious disappearances, mostly of young women. Illegal blood magic was used, and Stotts thinks Lon Trager is behind it.

Complexities ensue: Daniel Beckstrom’s ghost keeps showing up to deliver cryptic utterances, Allie is plagued by ghostly “watercolor people”, spirits that seem drawn to her spells, and Martin Pike, the de facto head of the local Hound community, wants Allie to take charge of the group if anything happens to him. Then Zayvion Jones returns. As before, Jones knows plenty more than he is willing to admit, but one thing he does tell Allie is that she is under investigation by the magical “Authority,” secretive vigilantes who hunt down rogue mages.

Although the writing isn’t quite as taut as in the previous book, Monk successfully delivers another original, entertaining novel. Allie is a lively and sympathetic character, the setting is vivid and crisply detailed, and the dangers that threaten are genuinely eerie. As the plot winds tighter and tighter, it is all too obvious to Allie – and the reader – that “You can be as strong as you like… be the best Hound there is, and still get your ass kicked in this town.”

A slightly different version of this review originally appeared in Black Gate Magazine #14.
___________

Charlene Brusso is an science fiction & fantasy author and science writer. She also reviews science and genre fiction for several venues, from Ad Astra and Black Gate to the NY Journal of Books (www.nyjournalofbooks.com) and the SF Site (www.sfsite.com).

You know, I have to ask, what’s up with these ‘skank’ covers? Seriously, I mean I get sex sells and all, but I recently read Norse Code by Greg Van Eekhout and the cover had absolutely NOTHING to do with the book, just some skank in tight jeans, an exposed stomach, and the standard ‘I want you’ look [I’m being very child friendly here]. Talk about all books looking the same! B&N is filled with these covers, so much so that I wonder if I’m in the Fantasy section of Maxim magazine stacks… Sheesh…

You forgot to mention the obligatory tattoos, Scott!

I think the really interesting thing about these covers is that most of them are now synonymous to a sub-genre with an overwhelmingly female readership. I wonder if the received wisdom that ‘guys buy things with pictures of hot chicks on them’ isn’t do for a bit of an overhaul.

Maybe it’s women who, knowingly or subconsciously, respond most strongly to a sexy gal in low riders and a halter top on the cover of a book? A bit of female wish fulfillment perhaps?

I can’t believe the marketing folks would do it if it didn’t work or if they thought they were going to alienate their readership — and it sure isn’t men who are buying paranormal romance in droves….

At least the woman on this cover has a head. For a while, nearly all genre fiction aimed at women showed a body on the cover from hips to chin, with the clothing (or paucity thereof) indicating the book’s niche. Clearly somebody thought it would be easier for readers to identify with the protagonists if there wasn’t some other specific woman’s face on the cover, and it must have sold books for a while. Still, I found it Very Creepy to look at the New Releases shelves at B&N and see row upon row of decapitated women.

Sarah: I wonder if someone in marketing figured out that if you didn’t put a face on there, the women buying the book subconciously might think they were the protag of the novel? In some creepy way it makes sense… and I’d never considered it before.

Bill: Tattoos… I knew I forgot something! 🙂