Art Evolution continues, this week’s image coming from a member of the later days of TSR. The character is yet another in a shared project representing a single figure created in many famed RPG artists most recognizable style. The project began here.

So I now had five, the newest of which was an ‘L5R Lyssa’. Half my list down and seemingly half to go, assuming I could flesh out my article with other greats I’d fantasized about since I wore parachute pants. 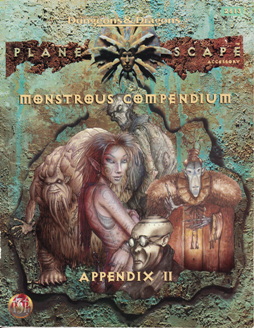 Sitting back, I took stock of all my memories on gaming, tried to picture the art that moved me the most, and I came onto some really profound names like, Larry Elmore, Jeff Easley, Tony DiTerlizzi, Wayne Reynolds, Todd Lockwood and Erol Otus just to name a few. Yeah, this was getting very real very fast.

What these artists brought to anything they were involved in was profound legitimacy, something I had very little of at this point. Still, I needed something binding, something tangible to offer up to these artists. I was a writer with no credits to my name, but I could still list myself as a ‘freelance’. That was a truth, and it is always better to provide honesty than fiction, especially when dealing with an established and intelligent clientele.

I decided to go for Erol Otus first since he’d done the least recent work of those I was considering. After some failed searches, I remembered he’d done covers for Goodman Games Dungeon Crawl Classics modules so I found Joseph Goodman’s email and inquired about Erol. Joseph was kind enough to pass along an email detailing my article’s premise.

Erol wrote me back, and he did exactly what I prayed he wouldn’t. He asked what artists of the ten were already committed, where the article was being published, and for a list of other things I had written and where to find them.

Yeah… it was that bad.

What could I do but be honest; and Erol responded as follows: “Hi Scott, just a quick note to let you know I got this, I didn’t want to leave you hanging over the weekend. A nice thorough response. I’ll send a detailed reply Monday.”

Looked like I was living right, and I was in a heady mood going into Saturday. On Monday, I received the following ‘detailed reply’: “Sean, I won’t be able to do an illustration for your article. My freelance time is very limited and its filled (overfilled really) into January. Good luck with it though! I look forward to reading.”

Whatever bad thing happened to Erol over that weekend was nothing in comparison to how horrible I felt on Monday. A rejection on top of calling me Sean… really? That was an icy bucket of water on my seemingly empowered ego. I emailed Jeff Laubenstein, who by this time was growing into a good e-friend, and he encouraged me to keep trying, that one failure didn’t mean the project wasn’t sound. 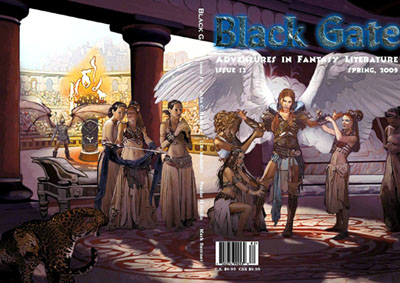 He was convinced that somewhere out in the world of publishing there were people who might actually like this article concept and solve my problem of a venue which in turn might solve my problem with other artists. Certainly I wasn’t the only role-player to be affected by the art of the industry. Seriously, what fan of RPGs wouldn’t think it was incredibly cool to see all these artists render a copy of the same character in their own unique style? It’d never been done in role-playing and it kind of brushed up against the central theme of comic book art that made seeing a Frank Miller Batman next to a Neal Adams version so awesome. I was convinced I was right, and so I started thinking about role-playing enthusiast and editor John O’Neill at Black Gate.

I’d read five issues of Black Gate, and although the magazine was filled with great fantasy stories, my favorite part of each was John telling a story in the opening pages. [On a side note here, this is what good DMs do, they tell a great story and John must be a great one indeed] These tales usually included something concerning role-playing, and I thought if anyone understood what I was doing it would be John… so I emailed him.

John emailed back, “I’m very intrigued by your article suggestion. It sounds like something that would be right up our alley.”

Now sure, that isn’t ironclad, but it was enough for me to run with and from that point on I considered myself a freelance writer working for Black Gate. 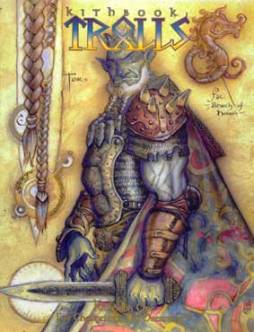 Steeled with the validity of my newest contact, I found out the Tony DiTerlizzi was doing a children’s book signing for Spiderwick in Washington D.C. in late September. This could be my first chance at a face-to-face, and I didn’t sleep the night before as I tried to get my pitch perfect. The fated day was overcast and I packed up a copy of Black Gate 13, took a train into D.C., and waited in a three hour line with hundreds of twelve year olds.

Getting a word in during such a signing, much less an article pitch, is like riding a bull. You get there and hold on for nine seconds. To this day I still feel bad for Holly Black who was signing with him because I couldn’t even say hello as I went straight to Tony with all the stumbling charm I could muster.

The haunting words of Otus still dancing in my head, I was dumbfounded when Tony said he’d be honored to contribute and was blown away that he would even be considered with the other artists of the caliber the article would include. He jotted down his email and told me to send him the specifics. 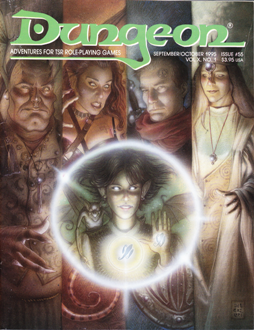 A key point here, Tony loves role-playing art. He was a fan before he was a celebrity in the field, and as I exchanged awkward emails with him I found him a true joy to correspond with. He’s light hearted, doesn’t take himself seriously, and still holds a great deal of devotion to the industry that started his incredible career. Tony represents the best part of the RP industry and after this point there isn’t a day that goes by I don’t thank him subconsciously for being the comical gentlemen he is.

Beside Brom in the final years of old TSR, rose Tony DiTerlizzi. Between Brom and DiTerlizzi there can be little comparison, a clear yin to yang juxtaposition exists between their mastery of styles. DiTerlizzi’s art returned to the basics, the comic genre, and his characters are anything if not cute. His gift for characterization and an almost ‘smoky’ essence to his work brought about a watershed moment for all players in the D&D universe. Planescape was his canvas and he made it something larger than anyone could have imagined.

Where Brom’s Darksun might not have lasted because of Brom’s departure from TSR, Planescape still holds strong today, almost 15 years after its inception and a decade after the final supplement rolled off the press. This can be attributed not only to its writers, but certainly Tony’s ability to bring players into an otherwise unimagined landscape.

Diterlizzi’s watercolor medium lent itself superbly to the otherworld of the planes. He not only brought form to the planar creatures, but also the stunning worlds themselves. 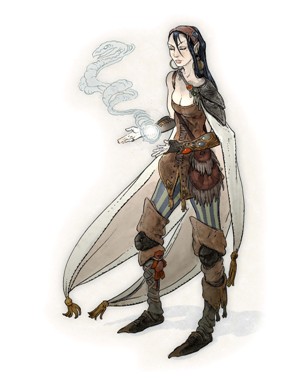 He created a style of almost fairy likeness, and even in a setting of deviltry and mayhem he created a childish edge to his work. His figures are sublime and imperfect, his hips larger than life and his legs spindles, but our eyes believe every detail and relish the ever-present gloom of muted color. Looking deep into a DiTerlizzi, you expect a knife from the darkness, but can’t help but walk into the rabbit hole. Always, however, you come out rewarded with dreams unimagined.

Tony brought light to a dark world, but ever kept it hooded behind a veil of violets and blues. His colors ran with amber, cinnamon, burnt umber, and olive and even cloaked in shadow he still brought vibrancy to the viewer’s eye. Bound in these colors is an elegant flow, an aspect in his art like water drifting along the sand of a beach. DiTerlizzi’s images move, they are seen through a lens thick at the edges, no sword is ever straight, no spear fully erect, and no character without a turn at the shoulder or reverse slope at the knee. It’s as though the curving interior of Sigil, the city of doors, reached across the distance between worlds and warped Tony’s pen to its ever curved liking.

Current Status: Tony is a busy man! He has released over a dozen Children’s Literature books and his newest solo work The Search for WondLa is currently burning up several bestseller lists. For more on Tony and his happenings, try visiting him here.

I remember the email!

This is my favorite rendition of Lyssa thus far. I love that fairy quality you write about, the slight body, the heavy clothing. Those boots are KILLER! I want a pair. You think he takes commissions? 😉

email? Which one, the good or the bad, LOL.

Yes, Tony is brilliant, but as far as I know he doesn’t make clothing… The boots do rock, the imp faces in the knee and the little teddy-bear is totally over the top. I have no idea why it’s there, but I think I’ll try to find out.

[…] newest contribution, ‘Planescape Lyssa’, gave me a great snapshot of the twilight of TSR. This time-period was something I called The […]