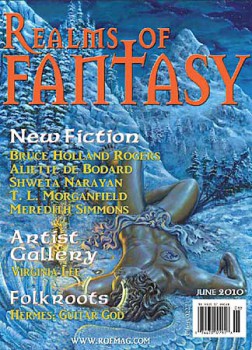 While rumors of its demise appear to be greatly exaggerated, I thought I should perhaps not wait too long to review Realms of Fantasy for this month. Just in case.

The proverbial “worth the price of the issue” story is “The Hearts of  Men” by T.L. Morganfield, who seems to specialize in a subgenre of her own devising, Aztec mythology.  I reviewed a previous story of hers, “The Place that Makes You Happiest,” that appeared in the final issue of Paradox, which postulates that colonizing Spain had not destroyed the Aztec culture and comes to predominate modern society in the Americas.  This time around, Morganfield transposes Aztec notions of the role of the gods and blood sacrifice (which Joseph Campbell devotees will note shares common themes with the central conceit of Christianity)  into the wild, wild West to ask the equally archetypical question of “Who are you, and why are you here?”

“You’re really him, aren’t you?” the boy asked, shuffling a bit closer.

I considered a moment before answering. “Maybe.” I really didn’t know who I was; I wore six-shooters at my hips and my battered felt hat smelled of sweat and rot, but when I checked it for a name, I didn’t find one.”

Morganfield suggests that, unlike the Greek conception of inevitable and immutable  destiny, things can sometimes change for the better, even for the gods, who sometimes are as clueless as the rest of us. You just have to have heart (a joke you won’t get unless you read the story, which I recommend).

Also in a theological vein is the cover story”Fallen” by Bruce Holland Rogers.  Angels have, for reasons unknown perhaps even to celestial authorities, fallen from the heavens. The official view, enforced by the government, is that the angels are sleeping, though they aren’t breathing. They aren’t rotting corpses either. But every time they fall, a fire starts.

There’s a story that I’ve heard about a fishing village in the Pacific. An angel fell right into their village, setting a a palm tree and some houses ablaze. Once the fire was under control, the elders met to decide what to do about the angel. They were a practical people. Whatever the angel was, it wasn’t human. It couldn’t be a sin to take advantage of the fact that it was fresh. They still had the ancient tools that their ancestors used to butcher whales.

This is an interesting idea, a play on the Roman Catholic doctrine of transubstantiation, in which worshippers literally imbibe the body of Christ.  James Morrow explored this more fully in his Godhead trilogy, and while there is only so much you can do in a two page story, I’d have liked to see a futher exploration of this idea beyond a setup for the one-line ending. Still, food for thought.

Some remains are never accounted for.  “Desaparecidos” by Aliette de Bodard imagines how “the Disappeared,” South American dissidents presumed murdered by their government but whose bodies have never been accounted for and are officially in limbo, might be set free to set the record straight.

“Sultana Lena’s Gift” by Shweta Narayan depicts an alternative ancient India that  makes use of mechanical creatures, chief of which is a bird that advises a young Emperor and who is, of course, smarter than the humans.

Hepta is a girls with some bad memories, even as early as age five.  Fortunately, in “The Well of Forgetting” by Meredith Simmons, there’s a way to purge these memories, though not without some ill-effects suffered by the purgers. Unfortunately, her facility to absorb the bad memories of others, however, can be put to good use, though initially her services are not totally under her control.  One thing she won’t forget, though, is how she might make use of her abilities to eventually improve not only her own state of affairs, but help others.

While I wouldn’t say this issue contains “unforgettable stories,” they are certainly enjoyable, and several aim to do more than merely entertain. Perhaps worth the price of a subscription?

Recent Reviews | In the gardens of Omeyocan…