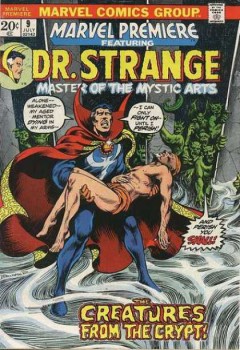 In a blog post of some weeks ago, looked at the one of my favorite Dr. Strange periods, when they’d established his overall mythos. The early 1970s was another kick-ass period for Dr. Strange, when the Master of the Mystic Arts became the Sorcerer Supreme.

In 1971, after the end of the series Strange Tales, Marvel’s Master of the Mystic Arts found a home in Marvel Premiere with issue #3. Marvel was just beginning an eerie period that mirrored the monster movie craze of the 1970s.

This period brought into prominence Marvel’s werewolves, zombies, Morbius the Living Vampire, Ghost Rider, Son-of-Satan, Dracula, Satana, Blade, and even ended up turning one of the X-Men into a furry monster. This tone seeped into Dr. Strange too.