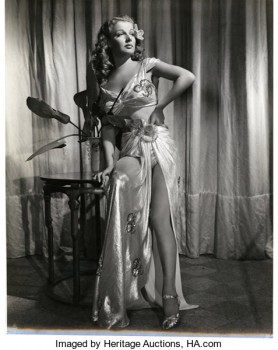 Coming off of Edward G. Robinson as the May Star of the Month on TCM, June is Ann Sheridan Month. The ‘Oomph Girl’ appeared in several hardboiled/noir/crime movies, so we’ll tell you some movies to look for.

Every Tuesday, there is a batch of Sheridan movies, and things kicked off June 1st, with eight flicks, including two Bogart movies: Black Legion, and The Great O’Malley. But the past is prologue.

Now, all of these films can be streamed live on Watch TCM if you get Turner Classic via your cable company. But even if you don’t, most of them can be viewed for at least one week after airing on WatchTCM. Some, like Casablanca, don’t get put up. I assume it’s to help sell mover DVDs. But most do. So, if you miss a movie, you can watch it via the app, or the website.

Having laid all of that out, let’s take a look at some of the June films, all EST:

June 2 (look for on Watch TCM)

A 1937 ‘social cause’ movie. It’s based on the real-life Black Legion, which was a splinter group of the Ku Klux Klan. Humphrey Bogart is a factory worker with seniority who gets passed over by a smarter, harder-working foreigner. And ends up joining the hate group. It was a strong performance by Bogart, who was just being forced by Warners to crank out B-movies (this was four years before High Sierra). Sheridan is fourth-billed and is really only the third main female. The speech from the judge at the end is as heavy-handed propaganda as you’ll run across in a Bogart film. Worth a watch.

This is a big budget western, starring the swashbuckling Errol Flynn. Michael Curtiz (Casablanca) directed, with a great musical score by Max Steiner. One of my favorite comic supporting actors, Frank McHugh, is here, as Sheridan plays female second banana to Olivia de Haviland. This movie features a heck of a bar room brawl, and the cast is solid. There was an unrelated follow-up with Flynn, Virginia City. Which included Bogart as a Mexican raider with a cheesy mustache.

END_OF_DOCUMENT_TOKEN_TO_BE_REPLACED 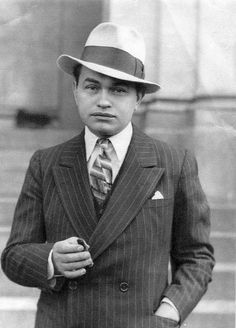 So, Edward G. Robinson is the May Star of the Month on TCM. Every Thursday there is a batch of Robinson movies, as well as some other movies featuring hardboiled stars, like Humphrey Bogart. Things kicked off May 7th with eight Robinson flicks, including two excellent Bogie movies, Key Largo, and Bullets or Ballots. But the past is prologue.

Let’s take a look at some of the films coming up this month, all EST. A note: any movie shown on TCM, which they don’t sell the DVD for, can be viewed on WatchTCM for a week after it airs. So, for example, Bullets or Ballots can be seen right now, but Key Largo can’t.

This is one of my Top Ten Bogart films – might even be Top Five. Bogart is Gloves Donahue, a NYC gangster. It opened up in January of 1942, in the early stages of the war. Hollywood was shifting from making gangster movies to war films, and this is both! Conrad Veidt (Major Strasser in Casablanca) leads a Nazi spy ring that runs afoul of Bogart’s gang. It’s a comedy-gangster-spy movie, and I think it’s a great watch. There’s a superb supporting cast, including Peter Lorre, William Demarest, Frank McHugh, Jackie Gleason, Phil Silvers, and Barton MacLane! I highly recommend this one.

In Casablanca, when Rick is advising Major Strasser about invading certain parts of New York, that’s an in-joke back to this movie.

This is a bad, science fiction/horror movie. It’s a little campy; but mostly just bad. I’ll let Bogie tell you himself how bad it was:

“This is one of those pictures that made me march in to (Warner Brothers boss Jack L. Warner) and ask for more money again. You can’t believe what this one was like. I had a part that somebody like Bela Lugosi or Boris Karloff should have played. I was this doctor, brought back to life, and the only thing that nourished this poor bastard was blood. If it’d been Jack Warner’s or Harry (Warner’s) blood, I wouldn’t have minded as much. The trouble was, they were drinking mine and I was making this stinking movie.”

That’s from an essay I wrote about it here at Black Gate. Watch the movie, read my essay. You’ll thank me later.

I’m not crazy about Robinson’s gangster comedies, of which this is one. A gangster goes straight. Much hilarity ensues. Sort of. It does have the always reliable Alan Jenkins, who appeared in lots of Warners crime films.

END_OF_DOCUMENT_TOKEN_TO_BE_REPLACED 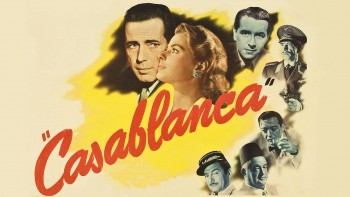 Now, I think that Casablanca is the greatest movie ever. I’ve seen it far more times than any other movie, and I rarely pass up a chance to sit down and watch it again when TCM runs it. I had never seen a Humphrey Bogart movie until my early twenties. Then, I went to the Ohio Theater, an amazing place on the National  Register of Historic Places, to see Casablanca on a HUGE screen. There was even organ music during the intermission. I was hooked for life and I now own almost every movie Bogart appeared in. I’m a virtual Cliff Claven of Casablanca trivia, and I’ve even written two short stories centered around the movie.

Frederick Stephani was a screenwriter who had penned the first Flash Gordon movie that Buster Crabbe starred in. He also did the screenplay for Johnny Holiday, a hardboiled movie starring William Bendix. After the success of Casablanca, Warners had him write a treatment for a sequel, working title Brazzaville – after the Free French garrison that Renault suggests he and Rick visit as they walk away from the airport at the close of the film.

Rick and Renault drive to Rick’s Cafe to find some unhappy Germans waiting for them. The Germans demand that Renault either arrest Rick, or turn him over to them. Rick says he’d rather be arrested. I can see Bogart wryly saying that. Renault smiles and looks at his watch; it’s 6:00.

He asks his aide, presumably Lt. Casselle, how long it takes to get a cable to, and a response from, Vichy. He is told, ‘six hours.’ He asks the Germans what charge is to be made against Rick. That’s reminiscent of him telling Strasser he has no reason to shut down the cafe in Casablanca. The Germans tell him some trumped up charges. Unlike the incident with Strasser, he stands up to them. He explains that Casablanca is still a free territory and they need to substantiate their charges. He adds that anyone can prefer charges, but if they can’t be proven, it will cause trouble for Renault.

The Germans, knowing that Renault is with Vichy, are confident, but don’t see the wink that he gives Rick. Rick then levels some made up charges against them! Rains decides he likes Rick’s charges better and arrests the Germans. They are furious and threaten vengeance. Renault offers to let them use the cables to contact Vichy to complain (Nobody plays cool and urbane like Claude Rains). Bogart is bemused.

Later, in Rains’ office, Bogart tries to find out what Louis is up to, but Renault puts him off and tells him to concentrate on their chess games. Renault is unconcerned by his very unhappy German prisoners.

END_OF_DOCUMENT_TOKEN_TO_BE_REPLACED 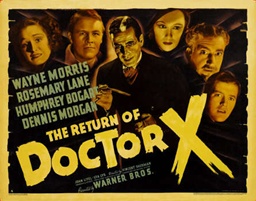 Into the nineteen fifties, Hollywood operated under the studio system. A few major movie studios owned both the production and distribution channels and dominated the industry.

They cranked out “B” pictures to provide product to support the “A” films and keep the theaters they owned filled.

Actors, especially non-stars, made several films a year, either appearing higher in the credits on B films or as supporting actors in A movies. Those actors had very little power in the system as well.

In 1936, Humphrey Bogart (who had already twice failed to stick in Hollywood) received his first critical acclaim for The Petrified Forest, in which he recreated his Broadway role as gangster Duke Mantee.

He would really strike it big in 1941, first with  High Sierra, and then The Maltese Falcon  (if you haven’t seen this one,  rent it tonight and then leave an apology comment on this post for waiting so long). In the five years between Forest and Sierra, he appeared in twenty-nine films: most not as the star.

Bogart famously said, “I made more lousy pictures than any actor in history.” This was because Warner Brothers tossed him into every low budget B movie they could.

Sometimes it was so bad that he refused the part, which then got him suspended without pay. That’s why you see Dennis Morgan and not Bogie in the awful western, Bad Men of Missouri (with Wayne Morris starring – see below).

Bogie, in a career with over eighty credits and possibly the greatest star in film history, made only one horror/science fiction movie. And he considered it one of his worst. He’s got a point.