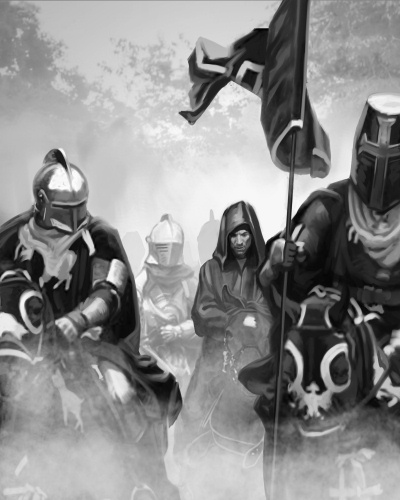 Dredge wished desperately for courage, to be like the Prince, riding regally and calmly at the head of his army, or Rheys, sweeping from one end of the column to the other, encouraging and exhorting his men, or Bord, riding alone into the darkness, or the Oracle, who rode as confidently and serenely as though a picnic awaited her instead of the edge of a sword. He knew that his own profile, huddled and barely staying in the saddle, suffered for the comparison.

Dredge was suddenly aware that it was easier to see. They had left the forest for the plains, and the sun would soon break the horizon.

It was then he realized that their company had been joined by two strange groups of four riders each, one group riding along each side of the column.

Jylla warriors. Riding at an easy lope, bearing lances and gazing at the column with disdain. Stevard’s men were staring back with unconcealed alarm. Many drew weapons and turned to face one foursome or the other.

Rheys appeared suddenly and hammered his men back into formation. He cut out about twenty riders, including Togra and Vanwal, two of his best lieutenants.

“Togra, take half and go after those four, Vanwal will go after the other,” he ordered. “They will try to lead you away from the column. They will try to tire you, or even lead you into a trap. Chase them for a kilometer or so, no more, and only if you are sure there are no more of them. I need them out of sight for a short time. Rejoin us as quickly as you can.”

Riders pounded away in each direction, drawing their swords. The Jylla waited until their pursuers were ridiculously close, then wheeled and sped. When they were out of sight, Rheys selected ten archers and told them to dismount.

“Those Jylla are yours,” he said. “Take your helmets off, and anything else that might cause a reflection. Nock an arrow and lie flat in the grass until they return. Try not to move until it is time to shoot. Do not shoot our returning men by mistake. The Jylla should not be far behind. If the same eight return, kill them. Do not miss.”

“What if they return in force?” asked a small man with a wide red moustache.

“Stay flat and hope they do not notice you,” Rheys replied.

“What about our horses?” the small man asked.

“I’ll have a man hold them for you out of sight ahead. Sound your horn if you need them brought to you, but try to walk. The Jylla might hear the horn.”

“Make sure it’s someone who’ll bring them when we call,” the man with the red moustache growled.

Dredge tried not to look back at them as the column moved off. Two men volunteered to hold the archer’s horses when they reached the appropriate point. Two more were chosen to take the Oracle back to the castle. She had looked with mild surprise at the Prince when he ordered this.

“The Realm needs the Relic,” the Prince said. “It… will be of no further use to us.” She had regarded him for a time and nodded. Then she turned to Dredge.

“Dragonhide,” she said. “Keep it with you.” Then she rode away with her escort.

“Best be sharp, lad,” said Bord grimly. “If she’s given you a dragonhide cloak, I’ll wager there’s a Fire Elemental riding with the Jylla.”

Dredge watched the Oracle’s retreating back and wished that the realm had needed him as well.

He did not know how much time had passed when word filtered back that the Whip was in sight, and beyond it, the smoke-dimmed, jagged outline of Halftop in the distance. He looked back continually, watching for Rhey’s lieutenants, but none of the men had rejoined the column. Perhaps the main force of the Jylla were farther away than they had thought. Perhaps Togra and Vanwal were harassing their flanks, slowing them…

He was perhaps ten meters from the river’s edge when he turned and saw the roiling dust cloud. Then he heard the drumming of hooves.

Two hundred heads turned to watch the approaching horde. The Jylla had fanned into a wedge-shaped attack formation. They were coming fast, and they were close. The lead riders, ranging far ahead of the Jylla army, charged back and forth at the rear of the retreating men, taunting them. They were bearing the same long lances Dredge had seen before, pointing at the sky, only now many of the lances appeared to be blunted, rounded at the ends.

When they got closer, Dredge realized that the lances were not blunted. Rather, something round had been impaled on the end. Panic did not truly seize him until he recognized the head of the small man with the red moustache.

Dredge plunged wildly into the rushing waters, without thought or plan. As Bord had said, the water was not deep here, but the river was fast. His horse struggled to make its way across as Dredge struggled to hold on. Stevard and Rheys were already on the far bank, exhorting their men. Then Dredge suddenly lost his grip and slid from the saddle, the heavy cloak bearing him under the water.

He struggled desperately, his lungs pleading. At last he ripped the cloak from his shoulders, and he broke the surface as it was whipped downstream. A strong hand gripped him by the scruff of his shirt and bore him from the water. Bord held his horse, and he ran to it and mounted, coughing water. Stevard stopped him with a shout. The Prince saw the manic fear in his eyes and raced to meet him, gripping Dredge’s arm in his strong right hand.

Dredge nearly laughed. “Magic?” he asked. “My magic? Against that?”

“Do your duty, Dredge,” the Prince said solemnly, releasing Dredge’s arm. “Slow them down. Do whatever it takes. Do not let them catch us.”

Then Bord was at his side. The scout placed a huge hand on his shoulder.

Dredge looked at the big man and knew then, really knew, that he was going to die. He swallowed several times but could not speak. Finally, he looked at the Prince and nodded, who gave only a crisp nod in return before riding away. Dredge felt smaller and smaller as the last of the men emerged from the Whip and the column moved away. Only Bord’s hand on his sodden shoulder kept him from going with them.

Dredge heard the Jylla approach but could not look at them, could not look at those horrible things at the end of their lances. The sound of their approach, the pounding of hooves and growing shriek of war cries, was overwhelming. Trembling, Dredge tried to focus on simply breathing, huge, deep breaths, as the old man had taught him. He tried to force his hands to relax their death grip on the reins, tried to force the muscles of his back to loosen and his heart to quit its hammering. Bord’s grip suddenly tightened on his shoulder.

“If you’re going to do something, lad, you’d better do it now,” the scout said.

Dredge nodded again, rode a few feet away from the big man, and looked at the charging army, now virtually at the edge of the riverbank. He raised his arms and saw, or thought he saw, the first faint hesitation in their charge.

Dredge reached into the waters with his magic, to the river bottom, as he had done so many times. He could feel, almost as though with his fingers, the familiar semi-softness of the river bottom, not quite water and not quite earth. His calling. As the old sorcerer had said, he was what he was. A Mudslinger. He gathered his power and brought it forth.

A great wall of brackish brown and green mud erupted from the river, rising into an impossibly high curtain that blocked the enemy from view, but Dredge was certain that the thunder of hoofbeats had suddenly stopped. The wall of mud appeared to stretch and hang for a moment, then it curled and broke upon the oncoming Jylla with a wicked slap.

The world seemed to freeze for Dredge as he looked in disbelief on the scene before him. Several men and horses were down, and others tried to control their mounts. Still others plunged into the river or slipped in the mud while trying to back away from it. The war cries had turned into shouts of alarm.

Somehow, he had broken their charge.

For an instant, the Jylla stared at him in amazement. Dredge held his breath.

And then one of the Jylla warriors, and then more, began to laugh.

They roared, shoulders and weapons shaking as the laughter infected them like a plague. They wiped mud from their eyes and weapons and laughed some more. One warrior picked up a fish that had been carried by the mud, and when he pantomimed it attacking his throat, the others howled with glee. Several scooped mud and threw it at each other. Dredge and Bord looked at each other, not believing their eyes.

Then the Jylla commanders advanced, barking orders, and the laughter died quickly. Expressions of amusement turned first to chagrin, then into flat, menacing stares, all of them directed at Dredge.

The complete version of “The Mudslinger” appears in Black Gate 11.

4 thoughts on “Fiction Excerpt: “The Mudslinger””