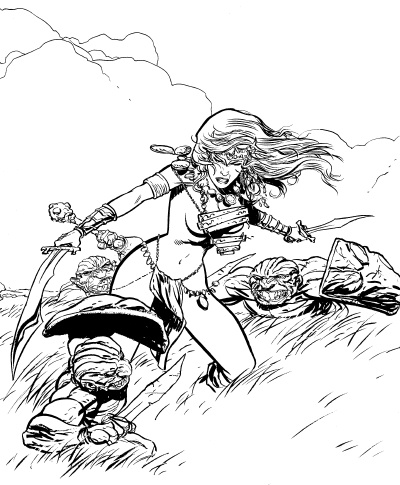 There were so many of them. Rushing through the ranks of the People of the Nation, sweeping like scythes through long grass. At last, the Wielders forced them back, the five figures herding and pressing back the dark tide of groundlings, cutting them down with gleaming weapons of steel. It was during this final stage in the skirmish, the least dangerous and terrifying part of the entire battle, that Anakira was struck down.

Her mind awhirl with the struggle, Anakira’s eyes were drawn away from the groundlings for but a moment. Glancing ever so quickly away from her foes, she focused on Morgan, the Camp-master. He was running rapidly towards her, covering his eyes and face from the glimmering, indistinct windling that fluttered around his head. His calls for help had been lost in the sounds of steel ringing against the crystal and stone bodies of the groundlings, but with his frantic approach, his cries reached her ears at last. With a flash of steel, she lashed her sword through the windling, scattering the ethereal creature’s substance, then returned her attention to the groundlings before her, the last that she and the other Wielders had to dispatch.

The groundling’s crystal blade made only the slightest impression on her vision as it slid past her sword and through her heart.

Even as her sword began its descent, she knew. As the shattered stone fragments dropped to the earth with the creature’s death, Anakira raised her eyes to the skies, just deepening with the first hints of dusk. There, glowing through the azure and violet, her star gleamed a pure white. Her strength fading, Anakira fell back, her eyes filling with the gleam of that single star. Her star. She listened to it, as it began to sing.

Anakira closed her eyes, the sounds of battle fading away.

She opened her eyes again hours later in her tent. Raising her head, she saw Wendannon sitting on the rugs nearby, pen in hand, writing lines carefully on delicate parchment. She watched him work, carefully dunking the silver tip into his ink pot, scratching new lines meticulously, row after row. As he worked his lips moved silently, unconsciously forming the words as he wove a new poem. Near him was a pot of steaming tea, two cups sitting empty nearby. Anakira rested her head against the pillows once more, watching him work.

How careful he was. His features, smooth shaven and tanned with endless days in the sun, reflected his intense emotions. Here was a man that could feel so deeply that his passions stirred the First Wielder of the Nation herself. Though he had lived a mere year for every ten of hers, Wendannon had been the first in many endless years to see past her being a Wielder. Wendannon looked beyond the warrior and saw the woman. She sighed.

He raised his eyes, clearly surprised. Setting aside his poem to pour tea, he showed no reaction to her words, though she knew he had long desired children.

“You have many fine daughters,” he said, holding out a cup of silver and onyx. The cups were hundreds of years older than he was, crafted by her first ward. There had been four men Anakira had taken as wards before Wendannon, and many of her most prized possessions were of their manufacture.

“I know, my sweet,” she replied, accepting the tea with a nod. “But you alone, of all my wards, have I given no children to, and now I regret it terribly.”

He shook his head, a smile masking the pain she knew he had long ago accepted.

“I know why you have chosen the course you have,” he said. “Tandi was born in two months, and Lura seven. But Morea was growing within you for almost a year, and Valeri just over two. What will our child require? Ten years?” He shook his head. “The groundlings would not give you so long.”

“Still,” she whispered, “I would do it.” Unexpected tears choked off the rest of her words. Anakira closed her eyes, drawing her legs under herself and huddling amid the crumpled blankets. Her hair swept over her face in a tide of auburn, and she felt Wendannon gather her in his arms.

She felt him stiffen in shock as her meaning became clear. His grip became tighter, protective and possessive. She looked into his eyes, for the first time truly feeling the uncertainty and dread all of the People of Kirana’s Nation must feel. This was the terror that she and her daughters had held at bay with steel. Death had finally found her, after centuries of war.

Anakira set aside her thoughts of the People, then. Just for that one night she gave her every thought to Wendannon. The pain of her people would not lessen by morning. No, for the first and last time, she set aside concern for all others, and thought only of the man she loved.

But in the darkness of the night, with Wendannon asleep in her arms, Anakira craned her head to peer at the star that glinted clear and bright through the fabric of their tent. Her star, always visible to her. And in the silent hours of the morning, she listened to its song, so recently new. For, where it had forever spoken only her name, over and over, now it sang a new name.

The next day, Anakira stood before her mirror, the tall polished silver reflecting her body from head to toe. While she’d been senseless the day before, Wendannon had bathed her, washing away the dirt and blood from the battle. Even then the injury from the groundling must have been gone. In any case, there was no sign of the wound now. The pale skin of her breast showed not a scratch.

Wendannon finished brushing out her hair, and swept it over her shoulder, reciting poetry as he did so. He dressed her as she stood, listening to him speak, watching their reflections in the silver. He would meet her eyes at times, his gaze bright with the intensity of his recital. He would playfully emphasize certain odd words as he tugged laces taut, or plucked wrinkles from the fabric. She found herself laughing quietly at such strange times in the verses, keeping her voice down lest others of the Nation hear. For it was a grim day, a day of accepting new losses. For her, the First Wielder of Kirana’s nation, it was an even darker day. But even now Wendannon still had the power to draw forth a smile, a scandalous laugh.

At length, when Anakira was presentable, she stepped out of her tent. Morgan the Camp-master greeted her. He was her grandson as well, the first child of her daughter Lura. He made a quick gesture to the campbreakers, and they rushed inside the tent just after Wendannon stepped out. Their belongings and tent were to be packed and loaded by the campbreakers, as they were every morning. The People of Kirana’s Nation were wanderers, as almost every nation was. Morgan bowed as Anakira walked past.

“I must apologize for disrupting your concentration yesterday, Anakira,” he said. Anakira looked at the young man, the son of her daughter Lura. Seeing his uncertainty, his discomfort, she smiled.

“Don’t be ridiculous, Morgan,” she replied. “That windling would have been the death of you.” It was certainly the death of me!

“You are a member of Kirana’s Nation,” Anakira said. “You have no need to thank me.”

The Camp-master hesitated, and then bowed his head. “The others await your arrival to convene.”

“Lead me to them.” The Camp-master led her to where the other Wielders waited, the rest of the People of the Nation standing in a group.

The convocation was at the center of the campsite. Even as her eyes swept through the group, she knew the names of all the dead. Of the hundred and twelve people that had stood at the convocation the previous morning, eighty-seven remained.

Twenty-five of the people. And one of their Wielders, if she counted herself. Her eyes found those of Morea, her second youngest daughter. Soon the Nation would go from five to three Wielders. Her daughter looked older than Wendannon’s forty-six years, older than her younger sister Valeri, who was not a Wielder. Morea was aging quickly, and the Nation had far to go on her behalf. Quendi was still days away.

Anakira addressed the gathering as she did every morning.

“People of Kirana’s Nation. My mother’s mother founded this Nation many centuries ago. In the first day of the Nation, there were ten thousand and fifty-nine people and seventeen Wielders. The seventeen women who took up steel in their defense vowed that the People of the Nation would remain safe from the evil that had begun to gather. In Kirana’s time they had no idea where the groundlings had come from. Their world was sliding into some dark place, and they struggled to secure a light for us, their descendants. This they did. The Nation is our light. We, the People of Kirana’s Nation will survive this dark time. We will emerge into a new dawn, though it may take us generations.” Here Anakira drew a deep breath. The formulaic opening concluded, she plunged into the present.

“The dawn we meet today shows our Nation to stand eighty-seven strong, with five Wielders for its defense.” There was a murmur as the People quailed. Though they had tallied the dead after yesterday’s battle, hearing Anakira recite the number made denial impossible.

“We are hunted here in Ahndara,” Anakira said. “And we must travel far past Demiji’s Rift before we dare make camp again. Riders, you will not leave the sight of Wielder Tandi. Scouts will stay just ahead. Beastkeepers, travel after the camp. There will be no mid-day break, so Morgan, you will organize the stove wagon and make certain there is flatbread for everyone.

“There is great danger close at hand,” Anakira continued. “I have no need to stress it. Please, remember your value to the Nation, every one of you. A hard push for one day should see us past Demiji’s Rift. Another should see us beyond the range of the devas that come from it. A third will see us safely in the land of Quendi, where Morea’s mortal star calls her.” Anakira dropped her gaze from the crowd as the idea of her daughter’s death overwhelmed her. But she steeled herself and pressed on.

“We will return as quickly as possible to the safety Morea’s Fount will provide.”

Anakira met her daughter’s dark eyes. “Yes, Morea. After they lead me to where my own star calls.”

The crowd gasped at once, then fell silent, shocked to its core. But the strain was too terrible for silence, and their voices rose as one, protesting the revelation, disbelieving. For longer than any of them had lived, Anakira had led the Nation as First Wielder. Their parents had known no differently, nor their grandparents. For four hundred years, Anakira had fought, since the first signs of womanhood had allowed her to touch steel.

A wail arose, forlorn and shaken. The tide of despair swept around Anakira and her daughter as they held each other’s eyes.

The complete version of “Mortal Star” appears in Black Gate 8.