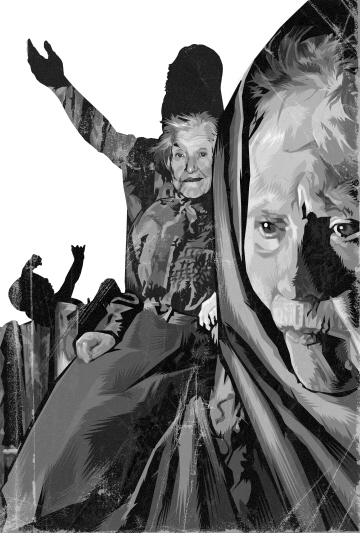 Nyla lay upon her stomach on the frozen ground and watched the black magician work. He was tall and scrawny, with receding grey hair and a beard so trimmed and pampered it all but said the word “vanity.”

She was close enough to be seen through the scanty winter brush if she wasn’t careful. Close enough to make out the words of the magician’s chanting; ugly, foetid words that made her want to squirm.

He and his familiar concentrated on the task at hand, unaware of being watched. They had not wasted energy on wards against humankind, for they feared no mundane danger on this bitter night. But from the protections they had drawn they were mortally afraid of the thing they summoned.

The baby lay upon the altar, loosely wrapped in purple cloth. Occasionally it wriggled and let out a weak cry as it suffered in the cold.

Nyla took the leather thong from around her waist and tied the bloodied petticoat into the shape of an infant. Then she chanted an illusion spell upon it as she ran her hands over the stained cloth. The afterbirth added verisimilitude to the spell and before her eyes a twin to the child on the altar took shape.

Now to switch the two. She dared not do it magically, for the wizard would feel any spell that ran so directly contrary to his purpose. Were he not so busy about his own business he’d have felt the glamour she’d just worked.

She pursed her lips. Oh to be fifteen again and quick and sure, she could have run in, grabbed the child and been off like a deer with no need for extra steps and the magician could never have caught her.

Why not wish for the moon while you’re at it? she chided herself. A distraction would be necessary.

The familiar, she decided, was the weak link, its obvious beast nature would work to her advantage.

It was an ugly thing with a wrinkled, pushed-in face, resembling a bulldog, but with a distorted human shape. Strings of saliva flowed from its jaws and its voice was an ear piercing whine, like the pleading of a whipped puppy.

She would work an enhancement spell to distract it, something that almost certainly would not disturb the vibrations of the magician’s power.

Nyla leaned over the little manikin and inhaled deeply. Like the child on the altar it was redolent of the scent of its mothers blood. She inhaled again and again until her senses were saturated with the stink of it. Then blew it out, in a thin concentrated stream aimed at the wizard’s familiar.

It snuffled, and its whiny descant to the wizard’s chanting faltered. The beast’s drooling increased as the blood smell maddened it. Licking its lips the creature’s little red eyes flicked towards the tiny, squirming form on the altar, the source of the delicious scent.

The familiar writhed and whined and licked its nose until the magician kicked it soundly to remind it of its purpose. Then the beast took up the chant again, too frightened of its master to disobey.

With a gesture Nyla increased the potency of her spell and the bewitching scent of blood overpowered the beast’s fear. Its hind quarters bunched and with a mighty leap it cleared the circle around the basalt altar to land beside the infant, growling and slavering.

Though he must have been furious at the delay and terrified by the omen of his familiar’s betrayal, no sign of emotion showed in the magician’s face. Shaking with effort, he levitated the creature off of the altar and over the elaborate circle he had drawn about it, dropping the beast heavily before him.

The familiar sprang to its feet and snarled, baring its teeth at its master, its eyes blazing defiance. The magician bent his power upon it, cowing it, freezing it in place while he kicked it. Meaty thunks resounded through the quiet woods until growls turned to pitiful whines.

While this battle of wills was taking place Nyla, crouching low and hidden by the massive block of stone, crept up to the altar and lifted the real child from its purple wrappings. Her hands shook and she almost dropped the tiny child when it squirmed. It began to cry and she hastily replaced it with the simulacra.

She took a moment to study the circle around the altar, reading the complex symbols. Then she reached out with her wand and made two tiny changes to the spell. They would be impalpable until the circle was charged with power and even then would probably not be noticed until too late.

She withdrew as silently as she had come and took up a position from which she could watch in safety. Nyla looked forward, with an academic interest, to seeing what would happen.

Glancing anxiously at the position of the full moon the magician gave his familiar one last angry kick. Then he resumed his chant, speaking the hideous syllables faster and faster. Nyla was reluctantly impressed by his skill even as she fought the nausea brought on by the sound of his spell.

At midnight the magician finished chanting and stood in the summoning posture, his fingers twisted into impossible shapes, his will focused utterly on his desire.

Without fuss or fanfare, but with a carrying stench, a demon stood before him. It had taken the form of a gigantic man with the head and shoulders of a fanged bull.

“What do you want, man?” The voice was deep and sonorous, the word “man” spoken with an aching contempt.

“Greetings great Akstorecht! I would have you renew my life force yet again. Behold, the sacrifice awaits you.”

“This?” the bull-man gestured at the baby. “You offer me this?” It reached out and caught the little creature up on the tip of one claw, the infant twisted once in agony and then became a bundle of bloody rags.

“Your sacrifice,” Akstorecht assured him with a grin, “is unacceptable.”

The complete version of “The Lady’s Apprentice” appears in Black Gate 14.

4 thoughts on “Fiction Excerpt: “The Lady’s Apprentice” by Jan Stirling”