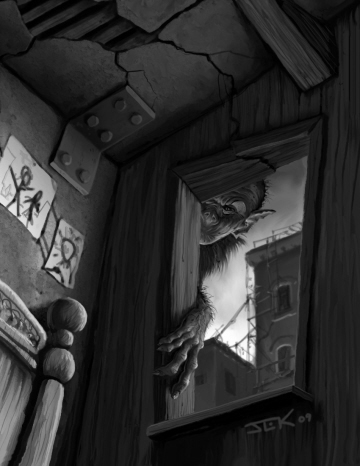 Cresy was awake again, and she couldn’t move. She could feel; she could feel the weight of the darkness pressing in against her, the humid air suddenly cold. She could feel that sensation, of having something long and ragged drawn from the center of her chest. And she could feel fear, lumbering clumsily inside her, involuntarily tightening her muscles, trying to bring tears to her eyes, trying to get her frozen muscles to make her run away. That fear was a palpable thing now, a real thing, crawling up from her stomach, trying to slither through her throat and out her mouth, trying to choke her.

The Thing was here, in her room again, shuffling softly by her bed. She could hear it, and it made her afraid. And more than anything, the fear made her angry. She shouted and screamed and wailed inside her head, screaming at the fear to go away, trying to make herself be strong, trying to move her arms by force of will if the muscles wouldn’t work.

After what seemed like an eternity, Cresy sat bolt upright in her bed, and the sounds of the city came back to her. But this time, this time she saw it. A black shadow by her window, curved, hunched over. It was built like a therian — small, like a child, but with long arms and huge hands, hands built for strangling. Its eyes glowed, featureless yellow orbs. And in the light from those eyes, she could see its face, and she could see that it had no lips. Just skin, stretched across its jaws, as it tried to scream, and couldn’t.

The Thing glared at her with hate and malice, and screamed with its silenced voice, and it was gone.

Cresy didn’t know what to do. She couldn’t move, couldn’t think. It had been here. Right here with her, doing… something. Something awful to her. It was a real thing. A bogeyman. She sat for a long moment, dread finally giving way to determination. I must follow it. And she clambered out her own window.

In her two years in the city, Cresy had spent a great deal of time with the therians. The simian creatures, disdaining roads, had built scaffolds and ladders, and complex networks of poles and posts all throughout the old neighborhoods. As their friend, Cresy had done her best to follow them where they went. While she was never as quick and sure-footed as the therians, she had done a fine job of keeping up with them.

And so, Cresy was agile enough to get to the roofs. From there, she stood, her eyes adjusting to the dark, and tried to pick out movement. There seemed to be no therians out tonight; maybe they were scared, too. There, she thought, as something dark and hunched leapt to a rooftop not far away. Cresy followed. For perhaps half an hour, she chased it, as the thing sometimes vanished into the dark, only to reappear after a few moments. A dark blot in a dark night. When she lost it for the last time, Cresy realized that she’d come as far as the Seam — the narrow strip of straightened buildings that marked the point where New Town spilled down Lirrigan Hill into Old Town.

She stood at the top of a low building, on a shallow-sloped roof, searching the unyielding darkness for signs of her quarry. It was difficult to make anything out; she thought she could see movement, not far ahead, but it could just be therians, or nightbirds, or… something. There was a sense that the night was moving around her. The silhouettes of cornices and scaffolds seemed to shift a little in the subtly dancing shadows.

Dancing shadows… Cresy looked around, puzzled. The gas-lamps had all gone out. The only light came steadily from moon and stars. Why are the shadows moving? Cresy began to realize what she was seeing. The whole stretch of rooftops seemed suddenly alive with movement. Black shapes, impossible to clearly make out, lurched from chimney to scaffold, through little pools of moonlight. There were so many of them… a hidden, invisible army. They crept, dark and sinister towards… towards…

Something. Trying to find a better view Cresy climbed to the edge of the roof, and reached out to snatch a piece of lattice work. She swung around it, and up to a higher, steeply-sloping shingled roof. There was a figure that the dark, lurching shapes were making their way towards. It was hard to see from where she stood, but it seemed tall and thin, and ragged. Its shape seemed almost human… a man, with long arms outstretched. And at the ends of its arms were… not hands. Twisted things, like claws or… or… Gods, what’s wrong with its hands?

Understanding began to dawn in her mind. Menace radiated from that ragged shape with its awful, twisted hands. Oh no. Oh no no no. Not that… don’t let it be that… Cresy felt tears in her eyes as her fear fluttered in her, a flock of crows seeking escape. No… she slid gracelessly from the roof, and scraped her knees. She sprained her ankle as she fell to the ground and ran, and tried to find the way back to Shattertown. It can’t be that…

More tears as panic fought for control of her mind. I can’t find… I can’t find the way back, how do I get back? Daddy! She cried, and tried to stamp her fear down. The unfamiliar buildings loomed and curved above her head, blocking out almost all the moonlight. Pitch-black chasms yawned around her, every corner was a place that could harbor a hunched, lurching bogeyman. Worse, she was sure that ragged figure with its terrible hands was just behind her, breathing warm breath on the back of her neck, ready to grab her, to snatch at her with clutching talons…

Cresy wept openly as a wrong turn took her to a dead-end. She whirled, to confront the enigmatic creature that she knew was following her. The darkened mouth of the alley was empty, but she was sure she could hear something, something moving, some sound just below the blood pounding in her ears, as she ran out of the alley and climbed onto a rope bridge. It swayed mercilessly, and for the first time in her life, she was afraid she might fall. She coughed and choked on her own mucous and ran. It was behind her again, following her with silent footsteps. Cresy dropped from the bridge, and ducked into the narrow passage made by two half-fallen buildings.

And there, moonlight shining down around it like a sign from her own patron god, was Emmerin Fountain. Cresy cried out with joy as she threw herself into its dry basin, pressed her back against its abstract spire, and looked out at the empty courtyard. Nothing moved in the pale blue light of the moon. She sniffed and wiped her nose with the sleeve of her nightdress. She knew her way home from here.

This is not right, she thought, as the mindless panic of her flight ebbed. I will not stand for this. This can’t happen again. I will be strong.

At breakfast that morning, John Gyre noticed something changed in his daughter. She was pale, and had a harried look to her. “What’s wrong?” He asked her, as they ate.

Cresy looked up at her father, and smiled a wan smile. “Nothing. Something was wrong, but it won’t be. I’m going to fix it.”

John Gyre nodded. A knowing motion. He leaned in, close to his daughter, and whispered. “You’re doing a brave thing,” he said, “but not everything can be fought with your hands.” Cresy blinked, wide-eyed, but her father said not another word. Just cleaned the dishes and left for the gallows.

When she was finished with the washing, Cresy decided to find her therian friends. She climbed the intricate lattice of scaffolding outside her own house, up to the weirdly slanted rooftop, and started shrieking the only words in therian that she knew. The truth was, she didn’t actually know what they all meant; they were just the words that she’d heard often enough to be able to repeat, and she suspected that they might actually be swears. It wouldn’t matter, though; therians were compulsively inquisitive. They’d have to find out who was shouting.

It was only moments before a few, ape-like creatures, curious beyond their capacity to ignore, appeared over the edges of the rooftops. “Shodi!” Cresy called to one of the creatures that she recognized.

Shodi, who Cresy thought might have been Fellik’s sister, leapt close, and grinned wildly. “What, oh why are we making so much noise, dear?” Two more therians shambled closer as well. They took a good look at Cresy, and then began hooting and chattering at each other in argument.

Cresy lowered her voice to near a whisper. “Shodi… have you ever seen things on the rooftops?” The two arguing therians were suddenly silent; they stared at Cresy with their wide, strangely human eyes.

As poor a liar as her brother, Shodi was unable to stop her trepidation from slithering across her face. “Of course of course, we see lots of things, little sister. Sometimes birds, or snakes. Sometime our own cousins. But nothing horrible, or scary, or anything that a little girl like you should have to worry about…”

“I know something is out there,” Cresy interrupted. “I saw it. Something came into my room last night, and I followed across the roofs, almost all the way to the Seam, and I saw…” Her tongue was tied. She couldn’t bring herself to say the name. It can’t be. It’s just a wonder-story. It’s not real. “You have to help me. The… bogeyman is going to come again tonight, I know he will. I have to follow it, I have to… find out where it goes.” The two unknown therians began to slink away to the edges of the rooftop, and Shodi eyed them apprehensively. “Please?”

With panicked shrieks, Shodi’s friends leapt away, leaving only her and the human child on the rooftop. “I… can’t.” Her eyes were so sad, so conflicted. “I can’t help you, little sister. None of us can. We don’t go out when he is out. When he’s hunting.” Shodi herself was backing off now, trying to discreetly make her escape.

“Because… we’re scared.” Therians weren’t like humans, Cresy knew. They couldn’t cry; but she was sure that she saw Shodi’s tear, before the simian creature slunk away. Strangely quiet.

The complete version of ““The Hangman’s Daughter” appears in Black Gate 14.