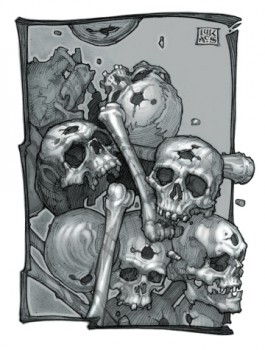 They were walking down from the crest of the ridge into a little rift in the mountain’s side, too narrow to be called a valley. The rift was carpeted with the tall green-gold grass that looked soft as cotton but would slash bare feet and legs like finely honed razors. At the bottom of the rift was a stand of trees, a mix of dark-needled pines and fluttering aspens. They were too high in the mountains for anything Thend considered a proper tree; there were no elms or oaks or stoneleaf majors.

Two of the pines had been stripped, except for a couple of branches each — it was hard to see them, as they stood behind a curtain of aspen leaves. But as he gazed, Thend became surer: those weren’t branches; there was something hanging suspended between the stripped pines.

“What is it?” he asked Morlock.

“A Khroi, I think,” the crooked man replied.

They went on down among the trees and long before they stood in front of the stripped-bare pine trunks, Thend saw that Morlock was right.

The buglike Khroi’s flexible arms were bound to its chest and its three legs were wound over and over with the same silken substance. It hung from the surface of a great spider web woven between the two naked pines.

“Is it dead?” Thend wondered.

“How do you know? What do the females look like?”

Morlock grunted. “Hope you never find out,” he added after a moment.

He crouched down to examine the ground as Thend looked up to find that one of the Khroi’s three eyes was open and watching them. The iris was the same dull purplish color as the carapace, but it was still an oddly human eye to peer out of so strange a face and Thend was troubled by it.

“Well,” said Morlock, standing up, “I am no tracker, to read a story from bent pine needles. But clearly the spiderfolk have done this. If we are traveling over their territory it is bad, in a way, but also good. That is why we are clinging to the western edge of the pass; the Khroi avoid it for they fear the spiderfolk.”

Morlock spread his hands, which meant nothing to Thend.

Morlock shrugged. “They do it sometimes. It may have a ripening effect. Also—”

“They’re going to eat him?”

“Of course. Spiderfolk will eat any kind of motile life, including each other, if nothing better is available.”

Thend always found Morlock’s face hard to read, but it seemed he was surprised. “A Khroi? No.”

That made Thend mad. “Why? Just because he’s a Khroi?”

Morlock shrugged his crooked shoulders. “The spiders kill the Khroi. The Khroi kill the spiders. I see no reason to interfere: either will prey on humankind, given a chance.”

Now Thend was madder. “To you, the Khroi are just the monsters who killed the Dwarves.” He pointed at the Khroi hanging in the spider web. “Do you see him? Have you even looked at him? Have you never known a Khroi as an individual, as a person?”

Morlock’s cold gray eyes fixed on Thend. “I traveled extensively with one, once.”

“And? When the journey was done did he kill you? Did he leave you to die?”

“He — Arrrgh!” Conversations with Morlock were always taking these abrupt left turns. Thend never had never gotten used to it, but at least by now he knew when there was no more point in talking. He turned away, drew his knife and started slashing away at the web-stuff .

Morlock didn’t help, but he didn’t interfere either. When Thend had severed enough strands of the web the bound Khroi fell to the earth with a wheezing sound that might have been a cry of distress or relief. Thend cut his narrow boneless legs free of the sticky silken stuff and then, more cautiously, freed the Khroi’s arms. At last he stood back, waiting to see what would happen. If the Khroi was too ill to move, what would they do? It was possible the Khroi was past saving.

The Khroi slowly rose to the ped-clusters his kind used for feet. He flexed each of his arms and legs all along their length, an eerie sight. There were a few wounds on his head and arms that were leaking the dark fluid the Khroi used for blood, but none of the wounds appeared to be disabling. He turned so that one of his three eyes faced Morlock and another faced Thend. The Khroi had needle-toothed mouths at the three corners along the base of their pyramidal heads, and this one clacked his mandibles once or twice, a mannerism Thend thought might be like clearing his throat. But then, instead of speaking, he jumped over and bit Thend on the shoulder, right through his jacket and shirt into the flesh below.

“Hey!” screamed Thend, and Morlock was there, kicking the Khroi in the midsection. The Khroi flew through the air and rolled a few feet on the ground, slamming into the base of a tree. He leapt back on his legs with unbelievable swiftness, gripping a sharp rock in one of its stringy palp-clusters, so unlike hands.

Morlock drew his sword, Tyrfing. Sunlight glittered along its black and white, strangely crystalline blade. “You have your weapon,” he observed ironically. “I have mine.”

The Khroi lifted the sharp rock and marred himself with it, scraping it savagely along his purplish carapace by the neck. He kept pounding with the rock until the point broke off, stuck in his shell like a tooth. He dropped the rock, looked at the two of them with two of his eyes, and then fled away through the trees.

“How’s that wound?” Morlock asked, turning away and sheathing his sword.

“It’s the best kind,” Thend snapped. “Hurts and everything.”

“Well,” Morlock said, smiling a little, “it’s not too deep.” He tore a strip from the hem of Thend’s jacket and said, “Hold this on it. When we get back to camp I’ll whomp up a poultice to keep off infection.”

“Whomp,” Thend muttered as he pressed the cloth against his wound. He felt as if the world was whomping him. “He didn’t have to bite me.”

“I think he was marking you,” Morlock said. “So he would know you again, if he saw you.”

“He meant it as a favor?” Thend demanded, pointing at his wound with his free hand.

“He did the same thing to himself,” Morlock pointed out.

“So that I’d recognize him?”

They climbed back up out of the rift, each wrapped in silence and his own thoughts.

“What was it?” Roble asked, when they returned to the little camp. No one had gone to sleep yet; they were all standing there, waiting.

“A Khroi, bound by the spiderfolk,” Morlock replied. “When it got loose, it bit Thend,” he added, as Naeli’s eyes strayed to the bloody rag Thend was pressing against his neck.

“Whenever my children go somewhere with you, they get hurt,” Naeli snarled at Morlock.

Thend dreaded what would happen next. Morlock would explain what had really happened and Naeli would focus her rage on Thend. When he was no more than ten she had run off into the woods to save her daughter from the Bargainers and the Whisperer in the Woods, and he hadn’t seen her for more than five years. Now the Whisperer was dead, they had been reunited and Naeli apparently intended to take up where they had left off: with Thend as a ten year old. He resented her long absence; he resented her assumption that he hadn’t grown or matured during the time when she’d abandoned him. But, no matter what he thought about her, there was something in his mother’s black burning eyes that could turn his knees to jelly. He braced himself for the worst.

“If you think you can shrug this off —” Naeli began threateningly.

“Shut up, you stupid moron,” Thend shrieked. “I cut the thing loose and it bit me. Morlock got it off me. It’s my damn fault, now leave me alone! I mean him,” he ended lamely.

Naeli looked again at Morlock then moved over by Thend. She moved his hand from the wound and examined it. “It’s not serious,” she conceded. “But it might have been. He should have stopped you.”

“He said not to,” Thend whispered. Thinking back, he wasn’t sure that was true, but it was close enough.

“He should have stopped you,” his mother repeated in a voice that was loud enough to be heard by everyone there. “Part of taking care of a child is telling him no and making it stick.”

This was so fearfully unjust to everyone, just everyone in the world that Thend couldn’t even speak. And Thend wasn’t a child, even if he wasn’t a man yet. If he never made any of his own decisions, how would he ever become a man? He felt he would have been in a better position to make this case if his face wasn’t covered with tears and snot, so he let his mother lead him off to have his wound cleaned and bandaged, but he was seething inside with unshed fury. And his skin crawled whenever she touched him.

“You really want to know?” Roble asked. “I thought you were just putting Naeli off.”

“I really want to know.”

“A sort of cat-beast attacked us while you were over the hill. Actually, there was a regular pack of them, but when Bann speared one they all seemed to be frightened of its blood: it’s got a pretty pungent stink, as you noticed. Anyhow, then they ran away.”

Then pointed at the west end of the camp. Morlock didn’t stir from where he was standing but, looking over at it, said, “A snake-leopard. We must move at once.”

“They’re not so fearsome,” Roble protested. “And if —”

“Why, Morlock?” Naeli called over, interrupting.

“They are the skirmishers and trackers and cattle of the spiderfolk. Look!”

Naeli and Thend went together toward the dead snake-leopard. It was hardly leopard sized, somewhat larger than the predatory tree-cats in the woods surrounding Four Castles. But it wasn’t really a cat: instead of fur it had the mottled scaly skin of a lizard, and its mouth hanging open displayed the forked tongue of a snake as well. Its slashed throat dripped greenish yellow blood. Wading in the blood were pale bugs, eight-legged like spiders, lapping up the still-warm fluid with long dark tongues.

“Those are newborns,” Morlock said. “They grow taller than Roble. And they prefer red blood. The adults will be here soon, led by the snake-leopards.”

“We’ll put a pad under your backpack’s strap,” Naeli said to Thend. “That’ll be a better bandage than anything we can tie on.”

Moments later, they were on the move, headed east.

The complete version of “Destroyer” appears in Black Gate 14.