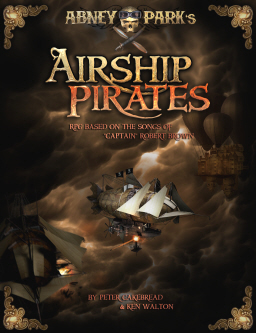 “Abney Park?” I hear some of you say. “Isn’t that a cemetery in London?” While the rest of you are saying, “No, Abney Park is a really cool steampunk band from Seattle who play music like this.”

Most of their songs, written by lead singer “Captain” Robert Brown, tell of the fictional exploits of the band in their time-travelling steampunk airship Cordelia. On discovering their music, we quickly realised there was a really cool background here that would make a kick-ass role-playing game.

We contacted the band, thinking, “This is mad, they’ll never go for it, no-one’s ever written a RPG based on a band’s songs!” But Captain Robert thought the idea was awesome.

When we emailed our publisher, Cubicle 7, Angus Abranson (who worked at Cubicle 7 at the time) was on the phone in five minutes. “Why didn’t I think of that?” Turned out he was an Abney Park fan too. Who knew? And so, a new game was born!

Of course, then we had to sit down and design it. Cubicle 7 offered us use of the game mechanics from their Victoriana RPG, which we tweaked and simplified for a more swashbuckling feel.

Captain Robert, it turned out, was a graphic artist as well as a rock star, and he designed the look of the game, as well as recruiting a host of amazing artists to contribute the full-colour artwork for the rulebook. And we took the song lyrics and Robert’s (then unfinished) novel, The Wrath of Fate, and set about expanding them into a game world with a particular feel.