A half-demon paranormal investigator fighting Nazis is how my friend Evan Dorkin described Mike Mignola’s Hellboy to me nearly twenty years ago. He had been reading the books in preparation to write a story for the Hellboy Weird Tales book. He thought I’d really like Mignola’s work, and gave me the first couple of issues. At that point, for all sorts of reasons, I was pretty much through with comics. Hellboy turned out to be like nothing else I’d read. Now, having just finished reading all four new omnibuses, Seed of Destruction, Strange Places, The Wild Hunt, and Hellboy in Hell, along with two additional short story collections (that’s almost 2,400 pages of supernatural awesomeness), I can safely state that this is my favorite comic and, more importantly, a significant and serious work of weird fiction.

In 1991, Mike Mignola sketched a monster to which he added the name Hellboy because he said it made him laugh. A few years later, he used Hellboy as the jumping-off point for a creator-owned comic to be published by Dark Horse. Initially, he toyed with the idea of something like the old Challengers of the Unknown, a team of paranormal investigators created by Jack Kirby (and maybe Joe Simon or maybe Dave Wood). Eventually, he rejected that in favor of focusing just on Hellboy. After a few preview appearances, Hellboy debuted in his own comic mini-series, Seed of Destruction, in 1994.

Seed was illustrated by Mignola. He wrote the story and John Byrne wrote the script. It recounts the story of Hellboy’s birth as part of a supernatural ritual carried out by Grigori Rasputin working with the Nazis in 1944 as well as the appearance of frog monsters. While it’s not my favorite Hellboy story, it’s very, very good and was more than enough to make me want to read more. Which I did, quickly buying all the collections available at the time.

Together with the parallel series, B.P.R.D. (Bureau of Paranormal Research and Defense), Mignola told an epic — in the truest sense — story. Hellboy, looking like a stereotypical cartoon devil (with a giant, right hand made of stone and a tail), was born specifically to lead Hell’s armies in the Apocalypse. As the series progresses, Hellboy becomes increasingly aware of his “purpose,” and fights against it. Numerous stories and much of his characterization revolve around that tension. Not wholly human, nonetheless, Hellboy strives to be a man and a good one at that.

Under the guidance of his foster father, Professor Trevor Bruttenholm, he becomes one of the foremost investigators of the supernatural and fighters of monsters (recounted in a series of stories collected as Hellboy and the B.P.R.D.). For decades, Hellboy investigates unknown phenomena and battles fiendish entities. The latter range from evil fairies to vampires to demons to even Baba Yaga. Gradually, other supernatural and psychic members are added to the B.P.R.D.’s roster, including pyrokinetic Liz Sherman, amphibious Abe Sapien, ghost-like Johann Kraus, and a homunculus named Roger. During a mission to a Nazi castle in the Austrian Alps, Hellboy discovers that Roger has been fitted with a bomb without his knowledge and quits.

Over the next several years, he wanders the world, encountering more monsters and increasing indications that Armageddon is coming. Eventually, he winds up in England where he discovers the specifics of his parentage and further details of his destiny, before doing battle against Nimue, Merlin’s imprisoner and commander of a vast army of monsters. The result of that battle leads to the final Hellboy story arc: Hellboy in Hell.

The collected version of the first story arc, Seed of Destruction, is dedicated, in addition to Mignola’s wife Christine, to H.P. Lovecraft and Jack Kirby. From the start, Hellboy was influenced by more than just those two, but you can see the impact of those great pulp fiction innovators throughout the book’s entire run.

There’s no missing Lovecraft’s amalgam of Gothic and cosmic horror in Hellboy. Lurking in the background from the beginning are the Ogdru Jahad, vast monstrous entities imprisoned outside of our world. Their intention is to come to Earth and destroy it. By means of human (and non-human) servants, they are constantly trying to break free of their bonds. Among their many servitors are the frog monsters, mutated humans who seem at least a little inspired by Lovecraft’s Deep Ones.

I always assumed Kirby’s heavy lines and bold, blocky figures were an important inspiration for Mignola’s own style. In an interview in The Jack Kirby Collector, he describes coming to Kirby later, after having studied the work of Bernie Wrightson, Frank Frazetta, and Frank Miller among others. Finally, as his own style evolved he said:

I lost interest in the fussy brush rendering, and went back for the more primitive, heavy-handed kind of stuff, which led really nicely into Kirby. Jack, on a much more abstract level, was doing the same kind of stuff. It wasn’t this pretty, fussy drawing; it was these big, strong blacks. Jack isn’t generally a guy you think of for spotting blacks, but he was putting enough highlight on certain things so you had a big, black, powerful drawing. That’s when I started realizing that the less you draw, in a lot of ways, is really more important.

So many of Hellboy’s panels are composed of solid backgrounds and only a few objects. Characters are often presented in silhouette, bereft of any detail. There’s a real minimalist approach in much of Mignola’s own artwork in Hellboy. The results are unsettling and haunting.

While Mignola remained the primary writer for the entire length of the series, he did not remain the sole artist and several others were brought in to depict Hellboy and company. For several years, Duncan Fegredo was the main artist. His art is more detailed than Mignola’s, but it succeeds at maintaining Hellboy’s atmosphere. And the legendary Richard Corben illustrated several stories, including “The Crooked Man,” an homage to Manly Wade Wellman.

In addition to the main storyline of Hellboy and his destiny, there are lots and lots of standalone stories. These draw on medieval demonology, folklore from around the world (including the Malaysian penanggalan, one of the creepiest monsters), lost races, ancient ruins, as well as all manner of classic pulp tropes. The bulk of these are contained in the two short story ominbuses, The Complete Short Stories, Vol. 1 & Vol. 2.  These are almost all just really good horror and pulp writing. Most of these would have worked perfectly in the pages of Weird Tales. While I’d recommend just jumping in and buying everything, these are a pretty good place to start.

You see, I haven’t made it clear, but Hellboy is only a fraction of the convoluted world Mignola has created. In addition to B.P.R.D. and Hellboy and the B.P.R.D. (of which there are at least eight omnibuses scheduled between the two as well as five B.P.R.D. Hell on Earth collections), there are the Abe Sapien series and the Lobster Johnson books. Hellboy has also made appearances in other comics, including my friend Evan’s excellent Beasts of Burden comic (about paranormal investigators who happen to be dogs and cats). This is a vast fictional universe and has to represent one of the greatest sustained works of fantasy.

Which brings me to the Hellboy movies. I had stopped buying the comics years ago and had given up on ever catching up. Then I rewatched the first movie, Hellboy (dir. Guillermo del Toro, 2004), starring Ron Perlman. Back then, I absolutely loved it and bought it on DVD. It’d been years since I last watched it so I put it on before Christmas. My disappointment was unexpected. The funny bits don’t hold up and the creation of a romantic subplot changed the characters too much. There are several fantastic moments and Perlman looks perfect, but all it did was make me wish it was better. (I didn’t rewatch the second Perlman movie, Hellboy II: The Golden Army (2008) because I disliked it the first time around.)

Despite having read it was not good, I figured maybe I should give the recent reboot, Hellboy (dir. Neil Marshall, 2019) with David Harbour a try. Whelp, that was a mistake too, though it did use several plots from the comics and the folklore aspects. Again, though, it is a disappointing film.

The main thing I took away from watching both movies was that I became determined to read the comics. When I discovered that everything was available on the Kindle, well, I went a little nuts and bought them all. Right now, having read all six Hellboy collections, both available B.P.R.D. books, and both Abe Sapien books, I’m in the middle of the Hellboy and B.P.R.D. series. I haven’t enjoyed any books as much as I’m enjoying these right now. 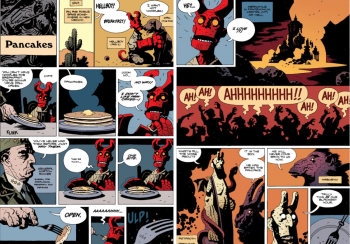 I’m a big Hellboy and Mignola fan, but I think Mignola’s art in the later stories are to expressionistic. I recently read Cosmic Odyssey by Mignola and Jim Starlin which predates Hellboy (I think) and his art was quite different though still Mignola’s style.

That complaint aside when Mignola’s on he is really good and even the lesser stories are still interesting. I especially liked the short stories because they reminded me folktales (which many were based on) and classic ghost stories.

I agree about the art. Mignola got to a point where he seemed like he was recycling stuff like the constant 3/4 perspective shots, and Hellboy at some point downright lost his shoulders entirely.

I like his later style, but I totally get what you’re saying.

It doesn’t ruin the comics or anything, but it is noticeable.

I agree, and oddly enough, the same thing happened with Kirby. His Fourth World stuff for DC is great in its way, but doesn’t come up the work he was doing for Marvel ten years before.

I think the problem with the movies is that Del Toro imposed too much of his perspective on the character. He embraced and overemphasized the freakishness of the characters (the movies feel like X-Men “saving a world that hates and fears them” stories) when one of Hellboy’s core virtues is that he comes off as such a disarmingly regular guy when you get past his appearance. Mignola has always been diplomatic but I got the sense that he got sick of Del Toro’s antics, especially when Del Toro started promoting himself as Hellboy’s co-creator, which is why we got the reboot (which I still haven’t gotten around to seeing).

I stupidly left out a whole bit about Hellboy as a mostly affable, working-class joe. It’s such an important aspect of the character.

I didn’t know Del Toro did that. Sheesh. I’ve been coming to the point where I’m starting to think Del Toro’s not a really good filmmaker. A brilliant designer maybe, but not a great storyteller. I definitely like less by him than I like.

I love Hellboy, but for me Mignola reached his never-to-be-equalled peak with The Amazing Screw-On Head.

I really love his Fafhrd comic with Howard Chaykin, which I wrote about ages ago

What a great recap. thanks for this. I was picking up hellboy as it was coming out back in the nineties. just gorgeous and funny stuff. i second the vote for pamcakes. my wife and i, to this day, call pancakes “pamcakes” (to which the only response is “truly this is a dark day for hell”).

Have you read Jim Starlin and Mignola’s Cosmic Odyssey? I suspect that may have been one of Mignola’s turning points – simply some of the most striking superhero books I have ever seen.

The Amazing Screw-On Head is pretty special too.