Last night I finished re-reading Herman Melville’s The Confidence-Man: His Masquerade. I had not read it in many years — I first read it in the mid-1970s in a graduate seminar on Hawthorne and Melville taught by the wonderful Professor Elizabeth Schultz at the University of Kansas.

It’s perhaps my favorite Melville book, and a significant influence on my writing; my first solo novel Good News From Outer Space was an attempt to cross the figure of the multiply-disguised Confidence Man from Melville’s book with the shape-changing aliens of classic science fiction.

It all takes place in a single day — April Fool’s Day — on a steamboat that leaves St. Louis for points south, carrying a carnival of American character types, among them a confidence man who assumes eight different disguises as he interacts with, and bilks, various passengers during the the course of the day. It’s been described as a series of sketches or conversations. But that description does not do justice to the ways in which this book deconstructs America — and friendship and society and capitalism and progress and nature and religion and language itself — pretty much anything that any of us put faith in. 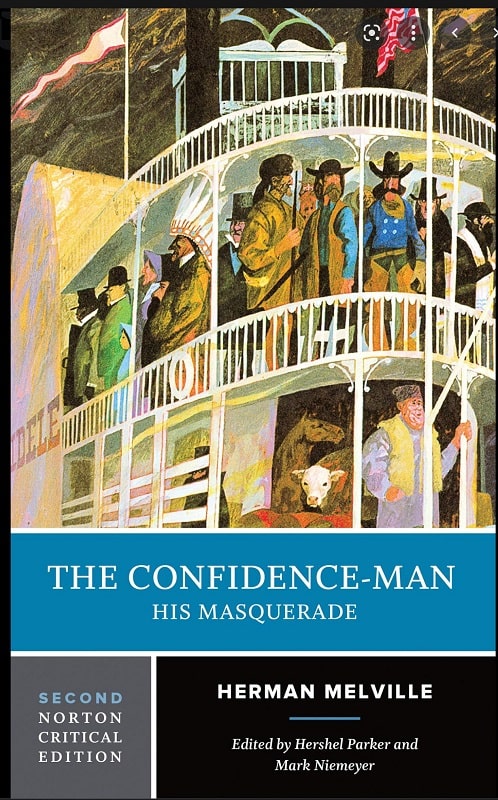 The novel holds up beautifully, and feels deeper and more profound than it did when I read it at age 25. I don’t know if it’s a very good STORY but it’s as thought provoking and subversively funny and breathtakingly modern as anything ever written. It’s no wonder it was a complete flop in 1857, and it’s not a casual read today. A hall of mirrors. A rhetorical mine field. Funny and dark dark dark.

Plus it’s a fountain of wonderful turns of phrase and observations:

“Never could abide irony . . . something Satanic about irony. God defend me from Irony, and Satire, his bosom friend.”

It really is a proto-fantasy novel. The Confidence Man as a character is this protean figure who miraculously changes from chapter to chapter, like a demon or alien.

John Kessel is the author of the novels Good News From Outer Space (1989), Corrupting Dr. Nice (1997), The Moon and the Other (2017), and Pride and Prometheus (2018), plus Freedom Beach (1985) written with his friend James Patrick Kelly. Kessel won a Nebula Award for his 1982 novella “Another Orphan,” in which the narrator finds himself inside Melville’s Moby-Dick, and a second Nebula for the novelette version of “Pride and Prometheus” (2008). His website is johnjosephkessel.wixsite.com.

I have not read Melville’s The Confidence-Man (to my shame). The story that it brings to mind is Twain’s “The Man Who Corrupted Hadleyburg”. Does Twain owe something to Melville? Or is his confidence man (and associated satire on American mores) a different creature?

First time I heard about this it was profiled in Jones and Newman’s Horror: 100 Best Books in an essay by Michael McDowell

Robert — Damn! Thanks for sharing that. I had no idea it was considered horror in some quarters.